A Bitcoin-supporting antagonist I encountered an hour ago, Mr T, was more original than 99% of others. When I mentioned that wealth or money's value cannot be created out of thin air, he quoted an interesting potential historical counterexample of "true fiat money", the Yap stones. 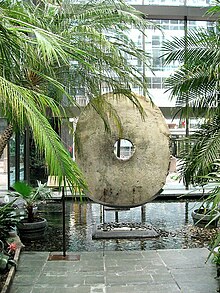 This Yap stone is stored in a Canadian museum of currencies. If you're a genuine numismatist, you will reserve your living room for this nice coin. ;-) BTW yes, this coin is so heavy that they mostly didn't move it – they just remembered orally whom each Yap stone belonged to.

They were rather large toroidal rocks taken from limestone, formed from aragonite and calcite crystal, and transported from Palau (or other islands) to Yap, an island in Micronesia (Pacific Ocean). OK, the debater suggested that this is an object without any intrinsic value and may be used as a historical precedent for the Bitcoin – proposed money created out of thin air. The Yap stones were a perfect, intrinsically worthless, fiat money!

My internal response was that "those stones were clearly just another commodity, perhaps a decorative one like gold" and immediately searched for these Rai/Yap stones and quickly found a nice essay, Yap stones and the myth of fiat money, by J.P. Koning, an expert in central banking.


In 2013, Koning, who just replied to my praise by saying it's his favorite parable, wrote that the very existence of the ideal fiat money is a myth. This myth is a lore that is obviously deeply rooted in economic schools of most flavors. So the idea that the Yap stones were perfect fiat money was supported by Keynes, Friedman, Mankiw, Tobin, and many others.


OK, so the story is supposed to say the following: Just like Satoshi Nakamoto decided that the virtual entity whose transfers are irreversibly recorded in his ledger would be used as the "new money", the Yapese tribes mined otherwise worthless toroidal rocks they had no other relationship to, and declared them to be their money.

The only problem with this story is that it's completely wrong. The Yap stones had a huge value before they were used as money. They were considered 1) beautiful, 2) religiously important. Concerning the aesthetic value of the stones, well, I agree that the topologically nontrivial stones are beautiful, indeed. I would love to own one.


If you need to buy a chicken at Palau, you pay 3 beads. For a cow, you have to pay 5 copras. For a wild night with the Palau's hottest babe, you will pay 10 pounds of coconut meat. But to see the largest Yap stones is... priceless.

There are things you can't buy for the money. For everything else, there are beads, copras, and coconut meat. ;-)


Fine, I admit that I have hybridized the ancient text with the priceless Mastercard TV commercials. But it is true that the Yapese have written that the largest stones were "entirely beyond price".

Concerning the second point, the Yap stones were religiously important (note that the religious culture described below is clearly compatible with the tribes that recently worshiped Feynman's famous Cargo Cult – the Cargo Cult was spread in Micronesia as well as Melanesia):


One local legend says that the bodies of the islanders’ ancestors, which were half-human and half-divine, have become the oldest stones (Gillilland 1975, p.19).

Another legend says that the Fairy Godmother of Yap chose which stones would become money, and the stones’ shape was also approved by her (Christian 1899, p.300). Regardless of the latter legend, it is known that the full moon shape had a religious significance.

Also, the local folks believed that their great grandfathers died and have been promoted to half-deities (who could also pilot the Western airplanes with the cargo, land in Micronesia, and leave some good stuff there) – and these half-deities were stored in or physically dual to the stones!

On top of that, you may see that these stones were promoted to money by a decree issued by an apparatchik in their hierarchy of Gods (Fairy Godmother of Yap if you know Her). If you ignored the aesthetic and somewhat spiritual value of the stones discussed in the previous paragraph, you would still conclude that the stones became money because of some big sponsor – in this case, a member of their dynasty of Gods. So the Yap stones weren't really a decentralized currency. They were as centralized as you can get – you know the precise female God who certified them. Her name was exactly as well-known as the name of Janet Yellen.

In the Bitcoin case, Fairy Godmother of Yap is supposed to be replaced by the consensus of a majority of Bitcoin miners who are ideally more decentralized although in practice, they are much less decentralized.

A monetary system that is irreligious – where the money is separated from the church – has to boil down to the power of some government. A part of the generalized government (well, the central bank which is often independent - but the independence is unavoidably limited) protects the value of the money by adjusting the interest rates. But if there were a more serious phase transition and if people started to leave the national fiat currency en masse, the government could arrest the people who are switching to a different form of the payment.

In Micronesia, you didn't need cops. The analogous goal was enforced by their deities. People were even more afraid of deities than the Westerners are afraid of cops and the IRS. Well, I guess that in practice, just to be sure, the deities had some terrestrial assistants who didn't differ from the government employees and the modern law enforcement officials too much.

At any rate, no one has ever created a true lasting value by saying something nice about something that had been considered worthless. If something is considered worthless, free and at least somewhat rational people just keep on considering it worthless! It can only change if they're forced to treat something as money by a threat of sanctions; or if the government promises to give you something for the money if you need it (e.g. for banknotes backed by gold). When something is used as a currency for a long time, there are lots of price stickers and contracts with numerically fixed amounts of the currency and those help to define the value of the currency in the future and they can preserve the value of the money even without the government's sanctions. But you just couldn't get to this point if you started with something that was worthless to start with.

I also love the religious analogy between the Yap stones and the Bitcoin. You really need someone and some religious faith to turn something into a valuable currency. Fairy Godmother of Yap and Satoshi Nakamoto play analogous, divine roles. A problem of this "religious money" in a modern society is that we usually respect the religious and irreligious freedom. And the Bitcoin infidels like your humble correspondent would simply continue to consider the Bitcoins to be worthless and they would never accept them as a compensation until some guarantees analogous for the national fiat currencies would be introduced.

The mental deviation of the Bitcoin community that makes them collectively believe that the obviously intrinsically worthless virtual thing, e.g. the Bitcoin, is very precious is a form of religious faith. It's totally analogous to ordinary religions that distort the views of believers on some special, "religiously sensitive" issues in random, often crazy, ways.

As Koning mentions, economists generally love the myth about "Yap stones as the fiat money" because they love the "fiat money" as the concept. Value of things may be expressed in something that is "infinitely" easy to produce (well, not so much in the Bitcoin case where the mining is extremely wasteful) so that one reduces the value to a number and he may focus on the "real economy". But in the real world, money were never created by saying "fiat money". Well, even light wasn't created by God's proposition "fiat lux" (let there be light). There was a pre-existing (string theory, GUT, and) electroweak symmetry and that got broken, and lots of other physical events existed before light emerged out of the darkness.

I can't resist to mention a great analogy between this widespread economists' obsession with fiat money and the classical physicists' attachment to the absolute space (or the aether; or the objective truth replacing all observers, or anything of the sort). The absolute space was great for Isaac Newton to describe the motion of planets and other bodies. All of them had some coordinates relatively to the absolute space.

However, the space isn't really absolute. All inertial frames are equal. The aether doesn't exist at all. In quantum mechanics, all phenomena need to be described relatively to an observer, and so on.

Maybe an even better example I should have picked is absolute time. In Newtonian, non-relativistic physics, you assume that there's some "clock" everywhere in space and it ticks and defines the objective and absolute time for everyone. But does the absolute time actually exist? Well, it doesn't. If you want to talk about time, you need to measure it by an actual clock – which cannot be infinitely light or infinitely small or invisible. And once you use real-world clocks, you may notice that the time is actually not absolute. It is relative, gets dilated, and depends on the reference frame!

I view the usual insights of modern physics as analogies of Koning's observation that the fiat money is a myth. The fiat money is like the absolute space or the aether or the absolute time. You can find this concept useful to define the formalism that may be applied to derive lots of things about the transfer of planets (physics) or salaries (economics). However, if you intelligently analyze the question whether the absolute space, luminiferous aether, absolute time, or idealized fiat money exist, the answer is No.

Since the beginning of the human history, trading based on the money was always a form of barter – in which the money was nothing else than another, very important and universal, commodity or thing that may be bartered. There is really no qualitative difference between the Euros and the wheat or gasoline, between the Croatian kuna and marten's skins (after all, "kuna" is translated as a marten). The value of the thing used as the money must pre-exist, and if it doesn't pre-exist, you must project the value on the money by some mechanisms – either pegs to something that has a value, or other mechanisms or threats of sanctions or something tangible. If none of these things exists, the proposed currency will remain intrinsically worthless, and even if it is exchanged for some value today, the exchange rate may drop to zero (or at least arbitrarily close to zero) tomorrow.

So in some sense, the economists who need the crutches of the concept of the idealized fiat money are analogous to the classical physicists before physicists were enlightened by relativity, quantum mechanics, and other deep insights that kickstarted modern physics. These fiat-money-assuming economists, much like classical physicists, may do and calculate lots of things that are useful and basically right in some limiting situations. But something is still deeply wrong or redundant or unphysical in their picture.
Luboš Motl v 6:29 PM
Share