His "scientific" arguments to establish a political thesis are "skewed"

One month ago, I discussed David Gross' message of love and peace: in his crusade against hatred, he was dreaming about the early death of Donald Trump and his ilk such as his tens of millions of voters. Like Nathan Seiberg, David Gross is visiting India and The Telegraph India wrote something about his political views:


Hatred on the rise in India: laureate
Ignorance behind fanatical nationalism, says physicist


He repeated that it's important to fight against hatred – and that's why he hates ;-) Donald Trump – but it's a mistake to blame 100% of the evil in the multiverse on Donald Trump. It's somewhat less than 100% – the whole world fails to conform to Gross' far left criteria. One nation that currently sucks is India, which he is visiting, the Indian journalists were kindly told.

According to Gross, all the Indians should be identical to each other and they should also be identical to Mahatma Gandhi and cry when someone gives them a bucket of water – because the river may die of thirst.


He mentioned recent tensions in Maharashtra which have actually displayed a tussle between two competing nationalisms. Gross thinks that such things – and the caste system – don't belong to the 21st century.

First of all, India has an amazingly diverse market of religions. 80% of Indians enjoy Hinduism and 14% are Muslims (Pakistan and Bangladesh were previously unified "two side pieces of India" that were defined to have a majority Muslim population). Christianity gets 2.3% and Sikhism, Buddhism, and Jianism – three other religions born in India just like Hinduism – boast 1.7, 0.7, and 0.4 percent, respectively. Other religions have collected 0.7%. Also, 0.2% of the people were irreligious or had an unstated religion – a somewhat lower percentage than 75% in Czechia. ;-)

On top of the standard names of religions, one finds various cults such as Hare Krishna movement, the Brahma Kumaris, the Ananda Marga. Add the traditions from the Vedic period, Yoga, and others (including the teas from India). The length of Indian names is highly diverse, too. Someone is called Sen, someone is called Balasubramanian.

The picture only shows 5 basic categories ("varnas") but there are 3,000 castes and 25,000 subcastes in the Indian system!

Gross has also attacked the caste system in India. What he may fail to realize is that by this attack on this extremely traditional aspect of the Indian culture, he is really attacking something that makes the Indians Indian. He really acts like an anti-Indian bigot and xenophobe, if I use the language of his far left comrades. (It's strange how easy it is for Gross and soulmates to criticize basics of Hinduism while tenets of Islam are untouchable – in the sense of uncriticizable.) Castes have existed in India for some 4,000 years or so. They were basically deactivated during the British colonial regime. When India became independent, they could restore some of the structures they have considered natural for quite some time and the caste system is among them.

I am no expert in 19th century history of India but almost exactly 200 years ago, on January 1st, 1818, there was the historic battle of Bhima Koregaon. Baji Rao II (a puppet installed by the Maratha nobles – he was formally a "Peshwa" i.e. the prime minister) fought against the British East India Company. The Britons easily won a Blitzkrieg and the lore says that it was because of some of their courageous and valorous soldiers, the Dalits from the Mahar (lowest, untouchable i.e. totally ostracized) caste.

OK, so 200 years later, the Mahar caste is still around – 10-12 percent of the regional population – and they celebrated the anniversary of their 1818 (and British) triumph. The losers in the battle were Pashwas and people from that community were 1) Brahmins, and 2) organizing the ostracization of the untouchable castes.

You may imagine that all these old and important battles are unavoidably imprinting themselves to the modern politics. So Dalits consider Devendra Fadnavis, a Brahmin chosen as the governor of Maharashtra by BJP-RSS (the ruling party of India now, Modi is from BJP), to be a new "Peshwa", i.e. the kind of jerk whom their brave ancestors defeated 200 years ago.

To be honest, I don't want to learn all the details of these political struggles and tensions but unlike David Gross, I get the basic key point – that they exist and they simply cannot spontaneously evaporate. Every child is born into some culture and/or caste and/or religion and in India, these groups simply are more separated or segregated than in other countries – and to some extent, such groups are segregated everywhere, of course.

It's just plain silly for Gross to "demand" a world where all these borders and castes and religions and memories don't exist. They do exist and they're very important. Also, whether you like it or not, they affect most of our Indian physicists and scholars whom we know in the U.S. I think that Edward Measure got it right when he wrote that Indians in the U.S. are leftist in the American sense but they are naturally right-wing according to the Indian criteria – as members of a wealthy, English-speaking class if not a caste.

So Gross basically wants to throw the families and ancestry of the Indian physicists whom we know into the trash can as well.

Verbal exercises used by Gross to promote his extreme egalitarian ideology make me laugh. All this "fanatical nationalism, racism and bigotry" which has also manifested itself in Maharashtra is "scientifically ignorant" because all these people are unaware of our shared mother, the mitochondrial Eve who lived some 100-200 thousand years ago. (See also the Y-chromosomal Adam for a male counterpart but don't forget that these two stories aren't isomorphic to each other.)

Now, it's a ludicrous argument, indeed. All of us may share a female ancestor – to one extent or another, "something like that" follows from Darwin's theory about the origins of life, anyway. But aside from these things we share, there are also things we don't share, all the divergence that was created in the thousands of generations since the mitochondrial Eve. This divergence is also perfectly scientific – after all, that divergence is the content of evolution which gave a name to Darwin's theory – but it is David Gross and not the targets of his criticisms who completely deny the very existence of this divergence, of these differences, barriers, or segregation.

When does Gross' picture of the unity of the mankind – derived from the mitochondrial Eve – start to break down? Well, this unity got broken as soon as the mitochondrial Eve got pregnant and had daughters, the seven daughters of Eve. The mankind is divided to these seven groups according to the "first generation after the shared one". The genetic classification builds on the haplogroups U (U5), X, H, V, T, K, J, and the daughters of Eve have been semi-jokingly named Ursula, Xenia, Helena, Velda, Tara, Katrine, and Jasmine – see a photograph. ;-) 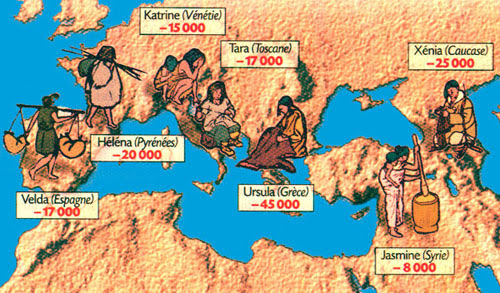 Just to be sure, the most recent shared mothers of these seven haplogroups didn't necessarily live at the same time – the birthdays are seen on the map above – so the label "sisters" is a poetic license.

So David Gross may highlight the fact that just "a few thousand generations ago" (he uses the unit "generation" for the number to look smaller – it's still the same 100,000-200,000 years) our shared foremother was alive. But an equally if not more important aspect of these observations is that for almost the same 100,000-200,000 years (or thousands of generations), the mankind has been divided to descendants of Ursula and her six sisters. ;-)

From a scientific viewpoint, the insights about the seven daughters – about the Haplogroups – are more interesting and have more "beef" than the mitochondrial Eve herself because some nontrivial data are actually appearing and require some explanations or checks. By overselling the mitochondrial Eve and completely hiding her seven daughters, and by claiming that this is the picture by which "science directly implies his political beliefs", David Gross is cherry-picking and he is abusing science to a similar extent as the Nazis and Lysenkoists did.

Science just doesn't imply that the caste system should be abolished or that all of us should behave as siblings and it's painful for David Gross to repetitively suggest that science is linked to these extreme political beliefs that he holds.
Luboš Motl v 6:44 PM
Share