Humor, satire, and rational analyses are the first victims of the anti-hate-speech law

A cruel non-democratic regime was defeated by the Allies in 1945 and West Germany has enjoyed more than half a century of freedom. In 1990, the post-Soviet East Germany joined that free world, too. That epoch is officially over – Germany has entered a new stage of absolute non-freedom, a new reincarnation of fascism. But Germans probably can't point even this basic fact out because literally everything is banned in Germany now. 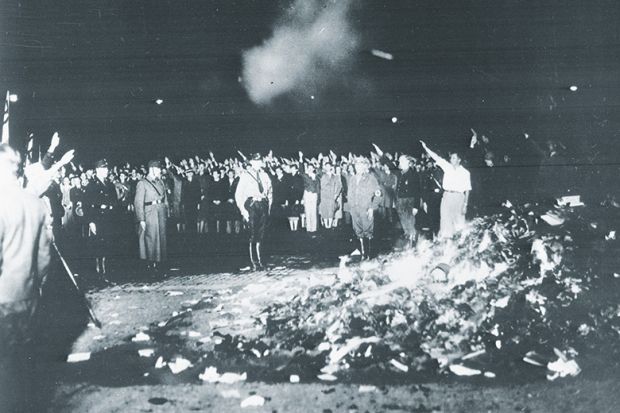 Germans have been burning politically incorrect texts for quite some time.

From January 1st, they are enforcing the so-called "NetzDG", a law that says that everything you write on the Internet is forbidden and considered "hate speech". According to the law, the Internet content company with over 2 million users (Facebook, Twitter, Instagram, SnapChat, YouTube) that forgets to delete something within 24 hours pays up to $50 million fines. To save the money, they delete everything. The content that has to be removed includes all of humor and satire.

So for example, Twitter had to sink the Titanic, the account of a humorist magazine which was told that humor was considered hate speech. The boss of the Titanic was informed that we're sinking so he asked: And what are you thinking about? ;-)


It's being said that two days later, the Titanic account was restored but they had to promise to avoid humor, satire, and any other kind of hate speech.

To enforce the law, Germans began to build and operate new factories, the so-called "deletion centers". The second deletion center was opened in Essen.

There are some 500 employees over there. "Junior erasers" get €10.50 an hour, "senior erasers" earn €15 an hour. All of them are constantly repeating that by censoring the Internet, they're saving the world. They ended up erasing just tens of thousands of contributions on the social networks per month. Because billions are being reported, it's likely that Germany will have to build thousands of new "deletion centers" and most of the Germans will have to work as erasers of the texts by the remaining Germans.

Ms Anetta Kahane, a former agent of the communist secret police, Stasi, is one of the big bosses of the censorship teams (through her Amadeu Antonio Foundation NGO). She should clearly have been hanged for her brutal crimes after the fall of communism – and now she was allowed to restrict the basic human rights of 82 million people again?


It's obvious that people who are members of or close to AfD, the Alternative for Germany, a party that hasn't lost its mind completely yet, are the main targets (but even some hard left folks have been targeted and they realize that something pathological is going on).

A shocking example involved the accounts of some policemen and a lawmaker. On December 31st, the Cologne Police wished their followers a Happy New Year in the following way:

If you can't read the clicky-hacky script (please be culturally enriched: "klikyháky", literally "pushups-hooks" or "clicks-hooks", is a Czech slang for unreadable scripts), you may want to know that it only wishes the "Germans" a Happy New Year.

Cologne was the city with the highest sexually powered criminal activity by the Muslim immigrants one year ago. OK, so how would you react if you saw the "German" police tweet in Arabic? You would probably point out:


Holy cow, why is the German police tweeting in Arabic? Is it to appease the barbaric, gang-raping Muslim hordes of men?


Now, Beatrix von Storch, a lawmaker for AfD, has tweeted (and commented on Facebook):


Holy cow, why is the German police tweeting in Arabic? Is it to appease the barbaric, gang-raping Muslim hordes of men?


Recall that "NetzDG" bans everything, and the sentence above is clearly an element of the set "everything", so the lawmaker was banned on both social networks. The Cologne police has successfully defended their tweet – and we have learned that the tweet was in Arabic rather than German because they wanted to be "understood by more people". I kid you not.

Just try to appreciate how insane and serious the situation in Germany has become. Ms von Storch is clearly right. Not only she is right. Every person who disagrees with her is clearly insane and should be kept in a psychiatric asylum. Not only that. She is a lawmaker and her comment was clearly an expression of the political opinion. In civilized Western countries, lawmakers not only have the right to speak on politics. It's a big part of their work – it's what they're really paid for unless the system is completely corrupt.

There exist lots of other examples. The terror against the actual opposition in Germany increasingly resembles the conditions in Nazi Germany of the 1930s. Heiko Maas, the social democratic author of "NetzDG", is clearly a criminal who should spend the rest of his life in jail. But Germany is already so deeply in the rectum that there are no politically powerful foes of this hardcore jerk who point out that he doesn't belong to a Western country.

Powerful enough politicians get exemptions even if they violate the hate speech maximally. So Angela Merkel's CDU/CSU has proposed to deport some 95% of Muslims, namely all of those who are anti-Semitic. Now, unless you have lived in a different galaxy, you know that an overwhelming majority of the Muslims (in Germany and in the whole world) are anti-Semitic.

So the proposal clearly urges the country to deport almost all Muslims. Except that Merkel's speech is protected and other citizens' speech is not so Germans aren't even allowed to go through the straightforward reasoning I have sketched.

It's actually amazing that millions of people aren't emigrating from Germany yet. Most of Germans are apparently OK with the new totalitarian regime just like most of them were more than satisfied with Nazism. It's a nation that is apparently never capable of learning a lesson. I would actually be rather terrified to even visit Germany – at least in any onymous way.

Almost all of my compatriots agree that these developments in Germany are just shocking. I have doubts whether it's possible to preserve the European Union given these almost "perfect" disagreements between whole nations that look almost as deep as the disagreements before the Second World War erupted.
Luboš Motl v 7:47 AM
Share