Only string theory excites Sheldon, after all

In Demons, Sunday School and Prime Numbers (S01E11), Young Sheldon's mother finds out he plays a demonic game, Dungeons and Dragons, and he is fooled into attending the Sunday School. He reads and learns the Bible and other religions and ultimately establishes his own, math-based religion that teaches that prime numbers make you feel good. He has one (stupid kid) follower. I was actually teaching similar religions at that age. 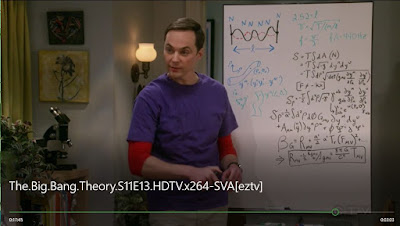 Meanwhile, in the S11E13 episode of The Big Bang Theory, The Solo Oscillation, Howard is almost replaced by geologist Bert in the rock band (also featuring Rajesh). The folks discuss various projects and it turns out that Sheldon has nothing serious to work on. Recall that almost 4 years ago, Sheldon Cooper left string theory. But you can't really leave string theory.


The wives got replaced, Leonard and Amy were revisiting their school projects, and Sheldon spent some quality pizza time with Penny. Penny figured out that Sheldon's recent projects didn't excite him. They were largely about dark matter. He didn't start to work on dark matter because it excited him. Instead, it was everywhere, and it served as "rebound science", using Penny's jargon. The term describes someone whom she has dated to feel pretty again.


So instead of calculating the odds that Sheldon's mother meets an old friend (that theme was clearly analogous to Richard Feynman's calculations of the wobbling plates), Sheldon was explaining string theory to a collaborative Penny again. Different elementary particle species are different energy eigenstates of a string vibrating in a higher-dimensional space, Penny was de facto taught.

Note the beautiful whiteboard posted at the top – click the picture to zoom it in. It contains a picture of standing waves; the Nambu-Goto action; the transformation to the Polyakov action at the world sheet, the superstringy fermions are included. Then he writes down the beta-function on the world sheet, finding out that its vanishing imposes Einstein's equations in spacetime. The beta-function even has the stress-energy tensor from the Maxwell field so it's not just the vacuum Einstein's equations that are derived.

What are the odds that you could derive the correct spacetime field equations from a totally different starting point like vibrating strings, Penny is asked? Even Penny understands it can't be a coincidence. Which other TV show discusses the beta-function on the world sheet, its spacetime consequences, and the implications of these consequences for the rational assessment of the validity of string theory? Even 99% of science writers who claim to have some understanding of theoretical physics don't have a clue what the world sheet beta-function is and means!

Penny introduces a natural idea – from the layman's viewpoint – about "what can be done with strings". You can make knots out of strings. But lines may only get "knitted" in 3 dimensions. 4 dimensions is already too much, Sheldon warns her. "Unless..." Penny pretends that she's on verge of discovering a loophole, and thus forces Sheldon to discover the loophole by himself. Unless you consider the "knots" involving the whole world sheets (and/or membranes and other branes or their world volumes).

Well, just to be sure, I think that "knots involving fundamental strings or branes" still don't play an important role in string theory – and there are good reasons for that. To calculate the knot invariants, you need to know the shape of the curve (strings in this case) very accurately, and this sort of goes against the basic principles and lore of string theory as a theory of quantum gravity (in some sense, there is roughly a Planck length uncertainty about all locations, so all finite-energy states of nearby vibrating strings are almost unavoidably weird superpositions of states with different knot invariants).

But that doesn't mean that I haven't been fascinated by "knots" made out of strings and branes and their physical meaning. For example, I and Ori Ganor wrote a paper about knitting of fivebranes. If you have two parallel M5-branes in M-theory (it's not a coincidence that their dimension is about 1/2 of the spacetime dimension!), you may knit them in a new way and the knot invariant may be interpreted as the number of membranes (M2-branes) stretched in between the two (or more) M5-branes. It's a higher-dimensional extension of the "Skyrmions".

The TV show makes it sound as if the discovery of some knitting of strings and branes might become "the next revolution" in string theory and therefore physics and science, too. Well, I have some doubts. Topological solitons like that are important – but they have become a part of the toolkit that is being applied in many different ways. They're not a shocking revolutionary idea that is likely to change everything.

On the other hand, knot theory and lots of geometric and physical effects that have nice interpretations are often naturally embedded within string theory. String theory has provided us with a perfectly physically consistent and complete incarnation of so many physical effects that were known to exist in geometry or condensed matter physics or other fields that a brilliant person simply cannot fail to be excited. And I do think that some proper treatment of monodromy operators in the stringy spacetime does hold the key to the next revolution in quantum gravity.

It will be good if The Big Bang Theory ends this pointless intellectual castration of Sheldon who was supposed to work, like some average astrophysicists and cosmologists, on some uninteresting and often fishy ad hoc dark matter projects in recent almost 4 years. It's natural for Sheldon to get back to serious work – to look for a theory of everything – and I sincerely hope that Penny will continue to be helpful in these efforts. (Well, I still think that the claims that Sheldon will "have to" share his Nobel with Penny are exaggerated LOL.)