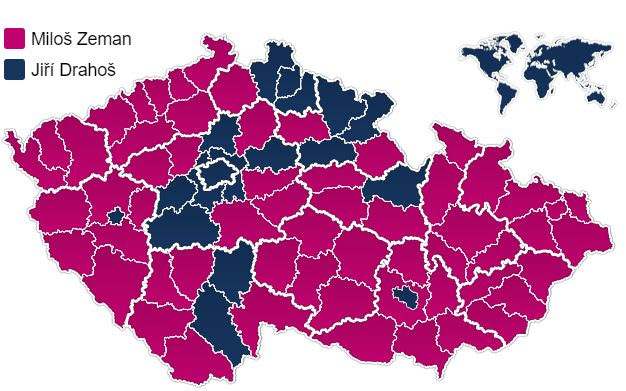 Among Czechs abroad, Drahoš won 86%, wow. In Prague City, Prague-West, and Prague-East, Drahoš won 64-68 percent. In Brno (2nd largest city, a dot in the Southeast), Drahoš had 57%. In all other districts, Drahoš had at most 52% or so – that includes Pilsen-City, my district. The rest of Czechia, the "countryside" or the "red districts", belongs to Zeman, almost with 55% in average.

Miloš Zeman is one of the 3 key Czech politicians who have built the new capitalist system after the 1989 Velvet Revolution in Czechoslovakia (along with Václavs Havel and Klaus). He conquered the social democratic party in 1990 and using his charisma, knowledge, and skills, he changed it from a tiny revival party to a 30+ percent monstrous party. As a right-wing voter, I was annoyed by his anti-capitalist criticisms around 1992.

But by the late 1990s, it was already clear that he wasn't such a bad guy. He signed the opposition agreement with Václav Klaus in 1998 – which was a power pact (giving the government to Zeman and Parliament to Klaus) which sidelined the small parties that were beacons of the politically correct pathologies we see everywhere these days. Klaus recently said that it was the "Havlist regime" that turned Zeman and Klaus into allies or friends.

Around 2000, I was already convinced that Zeman wasn't quite as left-wing and quite as pro-EU as he seemed to say. He turned into a proxy of "a guy of mine". After all, his government has also done a lots of work e.g. to privatize the banks, something that Klaus' right-wing governments were previously afraid of, and much of his social democratic and pro-EU rhetoric was just a verbal habit – from the times when he defined himself as the main, nominally left-wing opponent of Klaus. I was also sure that the self-described "eurofederalist" would become an unpopular man for Brussels in 2013 and he surely did just like I expected.


So Zeman became the main supporter of Israel among the European leaders, the main supporter of Trump long before Trump was elected, and a major critic of Islam, mass migration etc. among the European leaders. He loves to create witticisms and he's often vulgar but even though I would sometimes prefer a polite leader, his idiosyncrasies and expletives help to maintain the freedom of speech in the real life which seems much more important to me than the politeness of the president.


I didn't vote for him in the first round – I just decided that Topolánek was a better choice. One reason is that Topolánek is in a much better physical condition. Another reason is that Zeman is a rather clear excessive supporter of PM Andrej Babiš which I don't like. But at the end, I don't think that a politician should be primarily judged according to the health of his legs. And I find Babiš weakened enough so that Zeman's apparent support for Babiš seems tolerable to me. After all, I also do agree that Babiš's getting so many votes should matter in numerous political decisions (but not in all decisions in his life).

Topolánek, like most other candidates, endorsed Drahoš for the second round. Although I wouldn't applaud to this endorsement, I sort of expected it. Ex-president Klaus was shocked by that decision and it's rumored that he has informed Topolánek (whom Klaus has called "vacuous and insincere" in a famous SMS message a decade ago) that he (Klaus) finally erased Topolánek from his list of contacts on his cell phone. Well, I understand Klaus but as far as I can say, it's an overreaction.

I couldn't vote for Dr Jiří Drahoš, a trained chemist and former boss of the Czech Academy of Sciences, because he seems like another spineless opportunist politically correct politician of the Western European kind, a Czech Juncker or a Merkel in trousers. Unlike Klaus and Zeman, Drahoš could work just fine in the Academia during communism (well, yes, I appreciate that natural sciences were less politicized during the totalitarian regime). But I think that his publication and citation record makes it clear that he's a typical mediocre or subpar researcher who decided to make his living as a bureaucrat who isn't a problem for anyone, who always simply parrots the prevailing "expected" political opinions in his environment, and that's often enough in the Academia. He did it during communism, he did it as a boss of the Czech Academy of Sciences, and he wanted to become our president in the same way.

So I don't think he's been an exceptional scientist, I don't think he's trustworthy, and I wouldn't ever actively vote for him. Drahoš currently says that he's against the migration quotas but I don't believe that this comment really represents his thinking and his future acts. Some two years ago, he signed a "petition of some scientists" that argued that every refugee has the right to be accepted or something along these lines. We would clearly be drifting a bit closer to a satellite country of Angela Merkel if Drahoš were elected. The president is a mostly ceremonial job here (like the British queen) but he still has some real powers and it's natural for lots of people to listen what he says and to be loyal to him.

During the campaign, e-mails circulated that claimed that Drahoš was forced to cooperate with the communist secret police because he was blackmailed by the evidence that he is romantically attracted to small boys (and/or something that goes beyond attraction). I didn't receive those mails and it's plausible that they would look like crackpot nonsense to me – if I saw their style, grammar mistakes, and visible fabrication by a rural demagogue. However, I only read about these "lies" or "fake news" in the media and even though the writers of these stories painted the mass e-mails as "fake news", I remain open-minded about the question whether this story is true.

At any rate, this isn't a key story that has decided about my vote for Zeman (I voted yesterday). He has the right attitudes to the EU, migration, freedom of speech, and other essential things. He isn't perfect in my optics but Zeman is a clear plus for me. He is involved in foreign policy – something that Babiš mostly ignores – and Zeman seems to be on the good side.

When Zeman was voting for himself in the first round two weeks ago, a nude and ugly Femen (Female Semen) activist jumped at our president, screaming "Zeman's Putin slut". Zeman's guards jumped at her shortly afterwards. ;-) In the second round, Zeman was asking where is the nude activist today. Well, he got another one in the second round, indeed. In Kiev, another Femen activist went to protest Zeman. She wrote "Zeman, a limping monster" on her body and went to protest to the embassy (well, it was the Slovak embassy, not the Czech one, but you wouldn't expect a more accurate targeting from a Femen activist, anyway).

A woman with this appearance needs quite some courage to describe other people as "monsters". By the way, this woman is well-known to Czechs. A famous sculpture of this woman, Venus of the Lower Prophetville, was found in Czechia in 1925. It was created almost 30,000 years ago but as you can check, it's the same woman. ;-)

Days ago, The Washington Post wrote a widely cited hysterical text about these presidential elections, claiming that they're extremely important (they are not) and that Drahoš had a huge chance to beat Zeman (he didn't). If it's a text in the Washington Post, which country was helping Zeman? Yes, Zeman is a Russian puppet according to WaPo, indeed. (A Turkish daily even claims that Zeman is Russian, wow.) These memes almost exactly copy WaPo's anti-Trump garbage – it's sort of great to see that in some respects, Czechs face the same political splits and dilemmas as Americans. We're finally fraternal nations.

What is the sexual orientation of the author? Yes, your bet is right, Mr Jakub Janda is gay. Who owns the organization where Janda is a director or vice-director? Yes, it's George Soros. All "stereotypes" are totally accurate. If I owned lots of copies of the Washington Post, I would be selling them as toilet paper that may only be used by dogs and in the total darkness. But these people are as arrogant exhibitionists as Venus of Kiev – so they're giving this garbage paper to thousands of people as if they were newspapers.

Like Hillary Clinton, Drahoš was occasionally considered the frontrunner by the mainstream media, I was pretty sure it was a matter of manipulation and a wishful thinking just like in Hillary's case.

By the way, when it was clear Drahoš would win, he made a speech about the energy he accumulated which is conserved due to the energy conservation law. Funny. He congratulated Zeman but said "we didn't win but we didn't lose, either". This is a typical example of the insane politically correct Orwellian speech – "failure" is renamed as "delayed success" etc. He also promised the continuation in politics. That sounds clueless to me, this was clearly Drahoš's last 15 minutes of fame. Drahoš sang the national anthem which was not professional but musically decent.

Zeman made a cute speech, kissing his wife and daughter (a happy Tomio Okamura, a nationalist party leader, was nearby, much like the social democracy's interim leader Milan Chovanec of Pilsen, the former recent minister of interior), thanking his voters (specifically the rarer ones in Prague), and quoting the legendary movie "The Cozy Dens" that the "comrades from East Germany must have made a mistake" because the podium wasn't stable. He also thanked Drahoš's voters, especially because a narrow victory is more pleasing. Zeman left the anthem to singer Daniel Hůlka, Zeman's singing is clearly weaker than Drahoš's. The Washington Post posted a new hysterical story under the title Populist, pro-Russian Czech president fends off challenger, dashing liberal hopes. Painful yet unsurprising.

The U.K. Express says that the EU panics after Zeman's victory, partly because he could endorse the referendum on Czechout. Well, maybe, hypothetically, but the president's view on this issue isn't decisive, at least not in an obvious way.
Luboš Motl v 2:40 PM
Share