February 2nd was a rather miserable day. Dow sinked by some 2.5%, the worst drop since the Brexit referendum. Even the cryptocurrency believers were feeling lousy – the Bitcoin touched $7,550 and this event has surely convinced many that it could go to zero.

It was a much worse day for theoretical physics because Joe Polchinski died of brain cancer in the morning. 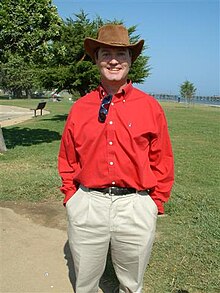 Things were surely more problem free when I took that picture (his main picture on Wikipedia) on a beach in Santa Barbara. I believe that Joe was the captain of a string theory soccer team on that day and that team defeated some condensed matter chaps or someone like that. Polchinski was also a vigorous bike rider in the mountains and other things.

Well, Joe's friend and ex-classmate who is an important member of the TRF community told me about the bad news very early. Now it's everywhere on Twitter (newest) etc. Here is the official letter by the chancellor to the UCSB.


Polchinski was a kind man and a top physicist. I won't try to review his life here because I don't feel enthusiastic for such things now – check a text about Polchinski's memories published half a year ago.


There are 175 TRF blog posts that contain the word "Polchinski" and I have found 756 e-mails with the word in my Gmail archive. Yes, I am still proud that my surname appears 128 times on a web page of Polchinski's. As a part-time guest blogger, Polchinski expanded top ten results of string theory to top twelve. He's been one of the best scientists who sometimes confronted the critics of string theory (see e.g. his string theory to the rescue).

Polchinski wrote one of the most famous string theory textbooks, did the most groundbreaking work to invent D-branes and make them useful. He has played with the black hole information puzzle, wormholes, and similar hard things in quantum gravity a lot – and coined Polchinski's paradox, firewall, and Everett phone in this context. Some of them are believed by most of his colleagues to be wrong but they still showed his passion and creativity.

Among the 187 papers with his name on Inspire, 15 are renowned (above 500 citations). It may be interesting to enumerate them:
Quite a list, and it's just a "demo".