Dark matter probably exists because in a galaxy, it doesn't

Galaxies seem to rotate much like the vinyl records – the angular speed or at least the normal speed is pretty much independent from the star's distance from the galactic center. That's very different from planets in the Solar System where the speed of Mercury vastly exceeds that of Neptune, the most distant planet (apologies to the dwarf planet Pluto and its fanatical fans).

Even with a more realistic, non-central distribution of the matter, one can determine that it indeed means that the motion of stars in galaxies is different from what is predicted by Einstein's equations (which predict the dependence closer to the Solar System) – assuming that only the visible mass (shining stars and gas) is substituted as \(T_{\mu\nu}\), the stress energy tensor, on the right hand side.

But the discrepancy may be fixed. You just add another term to the tensor so that the total one is equal to whatever Einstein's curvature tensor you determine from the spacetime geometry. (I can't guarantee that the total or partial stress-energy tensor will always obey energy conditions and other inequalities expected from general physical considerations but it seems to be so in reality.)

Zwicky figured out his colleagues were spherical bastards – which are defined as people who are bastards independently of the direction from which you observe them.

For almost a century, it's been a dominant explanation – Fritz Zwicky gave the first similar arguments (based on the virial theorem) that dark matter had to exist. It's not shocking that some matter in the Universe is invisible or different from the hydrogen in stars. It may be a new elementary particle such as a WIMP, SIMP, or an axion, or some MACHO or a small black hole, or something else. Some options are being eliminated by terrestrial direct search experiments but lots of them remain viable.


The other explanation is that there's no extra dark term in \(T_{\mu\nu}\). Instead, this school of thought says, Einstein's equations aren't quite right. They have to be modified – even their Newton's limit has to be modified. We call these explanations MOND – Modified Newton's Dynamics.


In recent years, I have been bombarded – and the public has been bombarded – by the hype produced by the MOND movement. But the evidence remained as weak as it was decades ago. MOND prevents you from deciding about the amount of visible matter and dark matter separately, so it is bound to be more predictive than dark matter theories. That's a double-edged sword. If the MOND predictions worked, the theory would be more predictive, and would have passed a tougher test. It would therefore be more strongly confirmed than dark matter that may be adjusted.

But that outcome depends on the assumption that MOND really passes the tests. Well, it seems OK for some large classes of galaxies but not larger structures and some special galaxies, especially small ones. 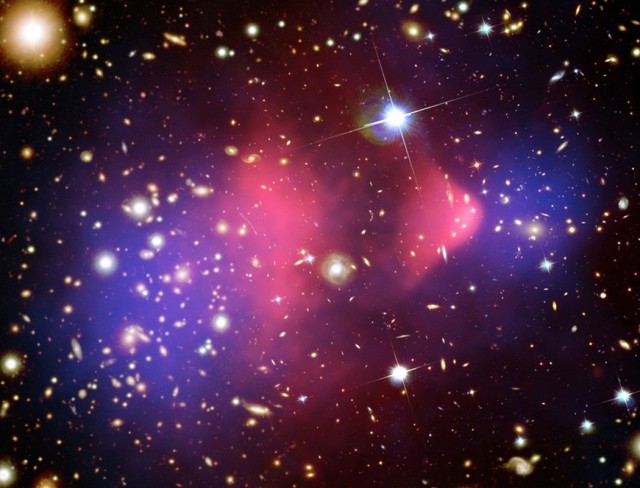 There are observations, like those of the Bullet Cluster above, that seem to imply that the visible matter and dark matter may be separated – like the red and blue spots are separated on the picture above. (Or as a soul that flies away from your body according to some religious believers.)

Well, this observation has been around for quite some time. I find it obvious that if a rational person believes that the observation above shows that dark matter and visible matter may separate by the distance comparable to the galactic radius, they may sometimes get separated even more than that, and then they have enough velocity to escape from each other.

If that's so, there should be galaxies that contain only visible matter – and those that only include dark matter (but the latter are harder to see because everything is dark in them). And indeed, a dozen of authors led by Pieter van Dokkum claim exactly that observation in Nature:


As Joshua Sokol summarized in the Quanta Magazine, galaxy NGC 1052–DF2, a half-transparent smear of light 65 million light-years away in the constellation Cetus, hosts some 200 million suns’ worth of stars, and negligible amounts of gas and dust. And that’s it. The need for dark matter over there is zero. It's just not there. If it's not there, it proves that the dark-matter-like phenomena may be separated from the visible matter, the visible matter may be "purified". That apparently implies that MOND – that predicts some modified laws associated with any galaxies – must be wrong and dark matter theories which allow us to separate dark matter from visible matter are the only remaining option.

Some people protest that it shouldn't happen according to theories of structure formation (i.e. the science about the conception and birth of the earliest galaxies). Give me a break. The claim that dark matter should "always" be underneath the visible matter may be at most an approximate rule-of-thumb. Moreover, we no longer live in the era of structure formation, dear dinosaurs' ancestors. So the dark matter could have escaped from that small galaxy and many others. When Gagarin was able to fly on the orbit around Earth, it was just a bit harder for Armstrong and Aldrin (and the janitors who helped them to get there, including a building-sized computer that was as strong as 0.001% of your iPhone) to escape from Earth's gravitational grip and get to the Moon. The cosmic velocities only differ by a factor of \(\sqrt{2}\) or how much. If you can escape by one Earth radius, you may escape completely, too.

That's why I still find it much more likely than 50% – and the probability has surely approached a bit closer to 100% today – that dark matter of some kind is the right explanation of all these phenomena. That's why I remain unexcited by frequent mails from a David that I am receiving and that claim that a guy named Milgrom is a Copernicus of our century or something like that. Most likely, all these people are just elaborating upon a concept that has been ruled out and that is getting increasingly clearly falsified.

It's possible that we will never observe dark matter "more directly" than by its impact on the motion of stars and dust in the galaxies. That scenario is totally consistent and shouldn't be considered an argument against dark matter.

By the way, a new paper claims some 4.2-sigma disagreement between GR and the August 2017 merger from LIGO. I don't plan to study the paper beyond the abstract because it talks about "quantum black holes". I don't believe that quantum mechanics is relevant for the explanation of these large objects observed by LIGO, so these people probably don't have a clue what they're doing. They're the same people who have written about some crazy LIGO echoes in late 2016 – I have probably dedicated much more time to them than they will ever deserve.
Luboš Motl v 1:28 PM
Share