Physicists Find a Way to See the ‘Grin’ of Quantum Gravity


which eclectically mixes people and idea associated with the phrase "quantum gravity" who otherwise belong to totally different layers of the scientific community. 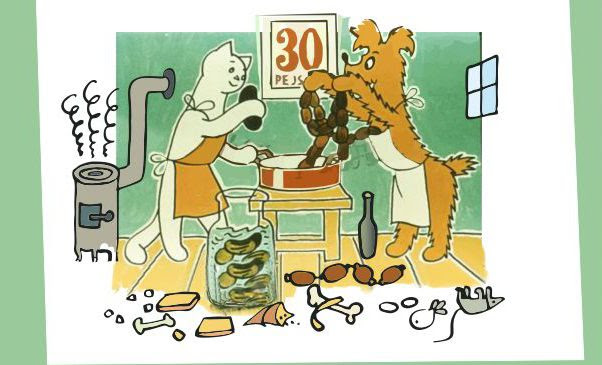 The interwar Czechoslovak artist Joseph Čapek, the brother of Karel "Robot" Čapek, is also known for the fairy-tales on doggie and pussycat. One of them is "How Doggie and Pussycat Were Making a Cake". To celebrate the doggie's name day, they added bones, cheese, sausages, caviar, cucumbers, strawberries, everything they liked to the cake. They ate it and felt sick. I think that at the end, an evil dog-thief stole the cake and felt sick, too. Czechoslovak kids could learn that it's not a best idea to mix everything. I am afraid that Wolchover hasn't been exposed to this fairy-tale.

She starts with the Soviet physicist Matvei Bronstein who proposed an early derivation of effective field theory of quantum gravity involving gravitons in 1935. Joseph Stalin said that there was a threat that this quantum gravity could grow to string theory – which Stalin's comrades Smolin and Woit (whose birth was already planned by the party at that time) won't like – so he executed Bronstein at the age of 31.


The main topic of Wolchover's article are two articles in PRL:


Lenny Susskind is the main true quantum gravity expert who is quoted in the Quanta Magazine (and so is Mark Van Raamsdonk, but he talks about the locality etc.) who explains that these proposed experiments may be quoted as experiments to measure Newton's law in a new region of distances and masses but they can't teach us anything about what experts like him actually call quantum gravity.

The actual quantum gravity requires extreme conditions like the vicinity of the Big Bang or a black hole singularity; or some extremely precise correlated measurements of the Hawking radiation from a larger black hole, or other things that simply are difficult and that can't be tested by these otherwise mundane experiments.


Quantum mechanics and gravity both operate in our world – so every viable theory that involves these two classes of phenomena unavoidably is a theory of quantum gravity. It's rather hard to construct such a theory that reconciles these two aspects of reality and string/M-theory is the only known (and probably only mathematically possible) theory that does so fully consistently.

On the other hand, the reconciliation of gravity and quantum mechanics at some "approximate or superficial level" is vastly easier and more straightforward than many other people think – including the authors of the two PRL papers above. The phenomena involving weak gravitational forces – such as those on Earth – are in principle understood by the well-known theories that generalize the Standard Model etc. in a straightforward way, as long as you are satisfied with a really good enough but in principle imperfect precision of the predictions.

In Quantum Electrodynamics, we calculate the "loop corrections", Feynman diagrams with internal loops i.e. non-minimal number of vertices for a given collection of external legs, and they are needed for really precise corrections. But if you don't care about this precision, you may calculate the tree-level Feynman diagrams only. The numbers obtained from the tree-level diagrams may be reorganized so that they become equivalent to the predictions of the corresponding classical field theory. You need to learn some theory to be able to do the reorganization but once you learn it, you can do it with any quantum field theory – and that's why the tree-level diagrams are often called "classical contributions".

These tree-level diagrams are perfectly understood in the case of gravity, too. So we may calculate all the effects of gravity on particles – including particles that are measured in the quantum way – using the tree-level diagrams. The true mysteries of quantum gravity only start when the loop corrections or non-perturbative corrections become large or start to spoil some cherished principles, and so on.

How does the gravitational force induce a change of the quantum phases? Well, if a particle falls in a gravitational field, its momentum in the downward direction increases, doesn't it? But quantum mechanically, the momentum \(p\) is nothing else than the "rate of change of the quantum phase" per unit length because the plane wave is \(\exp(ipx/\hbar)\). So if you measure the relative phase of the wave function at two nearby points, you measure the momentum of the particle. Because the gravitational force, like any force, changes the momentum, it changes the relative phase of the wave function between two nearby points!

Does the gravitational force induce the entanglement? You bet. The entanglement is nothing else than the most general correlation between two subsystems of a physical system when described by a pure state \(\ket\psi\). So to see that gravity may cause entanglement, it's enough to gravitationally produce some correlation in a system that may be described by a pure state. Well, place boxes A,B on top of each other. Place the particle X in the upper box A, and exert the gravitational force. The particle will be quickly attracted to the box B and after some time, it will evolve to a superposition of states which is partly in the box A and partly in the B.

But this superposition may be interpreted as the entanglement between the boxes A,B. It's the entangled state\[

\] where the kets entering each tensor product indicate the number of particles inside the boxes A and B, respectively. So the gravitational force may surely induce or speed up the creation of entanglement.

Aside from quantum phases or quantum entanglement, you may pick any favorite "quantum buzzword" of yours, propose any low-energy experiment, and brag that it's the first experiment that has demonstrated the "quantum buzzword" in the context of gravity. In all these cases, you will be equally full of šit. The simple reason is that we have a pretty much complete theory – the effective field theory of the general theory of relativity (plus other fields) – that governs quantum gravity in all these weak-field situations. And we also have a sufficient body of evidence that the theory actually works in all these situations. So you won't find anything new.

Negatively speaking, no one has any plausible idea for an alternative result of any of these experiments. And the people who propose alternative results are either unable to figure out that their proposed alternative result (or their weird theory that tries to "treat gravity classically" while everything else is quantum mechanical) is internally inconsistent or inconsistent with things that have been tested; or they completely misunderstand how weak-field quantum gravity (or quantum mechanics in general) works in the first place. You can't create a theory that treats a part of the degrees of freedom (e.g. the gravitational ones) classically while the influences are allowed in both directions. A consistent theory can be classical or quantum mechanical but it can't be both.

Wolchover's article mixes the actual quantum gravity experts with the fake quantum gravity experts. It's a bizarre meeting of different cultures. Chiara Marletto is surely a charming woman but her research seems to have no beef, as two older TRF texts have argued. Much of it is just irrational worshiping of the words such as "constructor", "extinction", and of random sentences and experimental designs that seem to mix quantum and gravitational features, like in the cake of the doggie and pussycat. She couldn't even dream about starting a real quantum gravity research – as the phrase is understood by Lenny Susskind, Mark Van Raamsdonk, or me, for that matter – because she's clearly confused about many basic things and she sees magic dragons at many places where no dragons may exist.

On top of her and other co-authors of the two PRL papers, the Quanta Magazine mentions several crazy propositions by Freeman Dyson, Roger Penrose, and Lajos Diósi who want to claim that "gravity isn't quantum", "gravitons can't exist", and several additional stupidities. Well, they may be famous and achieved scientists but these statements are just ludicrous screams produced by the total laymen. There is absolutely no scientifically defensible evidence that could be written in a paper that could be taken seriously by anyone who has learned the basic facts about that discipline.

Gravitons have to exist. Gravitational waves have been discovered by LIGO (and indirectly, by the pulsar in the 1990s). And a wave function has to describe such waves. Because the wave functions depend on time as \(\exp(Et/i\hbar)\) and we want all the relative phases to be periodic (because the monochromatic gravitational waves affect other objects in a periodic way), it follows that the energy eigenstates contributing to the wave function have to have energies that differ by integer multiples of \(E=\hbar\omega\), the energy of one graviton. So the gravitational waves have to carry a quantized energy – they have to be composed of gravitons. The argument is identical to the argument that implies that electromagnetic waves are composed of photons – and it is equally valid in both cases (and the case of any other waves), too.

The theory we have actually describes all low-energy or weak-field experiments correctly, almost certainly so. That probably includes all experiments whose budget is below one billion dollars. You may be "skeptical" towards these statements but just by being skeptical, you haven't presented a competing scenario or an alternative theory that would allow you to be treated a peer of the actual quantum gravity experts who have the effective theory, who sometimes co-created it, and who may apply it to compute the results of any doable experiment. Your name may be Penrose or Dyson but the name just doesn't matter – in quantum gravity, you're still an irrelevant whining layman. Actual quantum gravity experts know how to calculate the verifiably correct predictions of these experiments – while the fake ones can't. There is no "democracy" between these two groups.
Luboš Motl v 12:04 PM
Share