I am getting a nontrivial amount of mail from "alternative thinkers" who believe that they have discovered something groundbreaking. Much of it is repetitive but a few days ago, I was dealing with something new.

An artist of a sort who doesn't have any mathematical or science education has claimed to have found some "pattern in everything" which isn't quite normal science but it isn't pseudoscience, either. 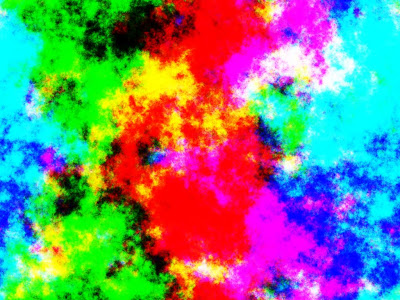 Imagine that 30 random white lines are added to the picture above and it's animated. I don't want to embed his picture with the lines because I think he's insane enough to sue me for copyright violations. ;-)

To make the story short, he would add dozens of straight lines to any picture – women, smokes from cigarettes, clouds, ocean waves, dozens of other things from the real life, as well as the random colorful cloudy picture of mine that I sent him.


The point of these lines wasn't clear to me – so if it's not clear to you, you're not the first one. The lines can be "really seen" in every picture, he claimed; they must be important, and so on.

So I gave him some basic common sense about these matters. Some objects in the real world have a reason to have an overrepresentation of things that look like straight lines. For example, if smoke comes from a source at a high velocity, it tends to move along straight or mildly curved trajectories. They're straight because of some inertia. The structure formation that made galaxies possible also prefers filaments for some reasons.

And indeed, there may be fundamental one-dimensional strings, e.g. cosmic strings, that are seen in the background of some hypothetical cosmic images.


But there are pictures which have nothing to do with straight lines – it's equally meaningless to add straight lines to them as it is to add disks or Smurfs to those pictures. By construction, my colorful random cloud belongs to this category. I chose some random Fourier coefficients, created the Fourier transform, and using a functional transformation, I made sure that the colors fit to the usual cube of RGB color codes.

So there's just no reason why there should be any preferred straight lines in that picture, right?

OK, the guy kept on sending me dozens of such photographs with added lines. One of the points I tried to make was that he couldn't possibly add the lines to a given picture twice in the same way, yet independently. He disagreed and the animated picture at the top was supposed to be his proof. The networks of lines are either exactly the same or they're extremely similar so that the locations don't differ by much more than one pixel.

So I just don't buy it. There are obvious reasons why a human can't be able to add such lines in the same way twice. If you tried to decide "which idealized line most precisely reproduces some fuzzy patterns that exist in the analog picture", you have to implicitly make lots of decisions such as: Is the contrast between these two places of the picture higher than among other two places? This is important to decide whether you should add another line to some region and which one.

Because a human just can't possibly measure the color precisely, there's an error margin in all of his decisions and this error margin unavoidably means that if the "same" procedure is repeated twice, the results have to be substantially different. Do you agree with me? A computer could process a photograph according to an algorithm and the result would be the same unless a random generator were used. But a human is an analog computer of a sort and because of the error margins, the distortions by a random generator cannot be avoided.

On top of that, I don't really believe that he can have any particular algorithm in mind. I surely wouldn't be able to create any network of lines that resemble his. He claims to translate an analog picture with continuous colors of each pixel to a set of lines determined by their endpoints (on the boundary of the rectangle). There's just no natural or canonical map to do such things.

For me, the fact that he claims to get the exact same pictures twice is a proof that he is not telling me the truth. He probably doesn't understand mathematical thinking at all so he thinks that it's possible to fool the people in this way. But he just can't fool me. He's adding some almost random straight lines according to some extremely vaguely defined criteria. And a human can't do much better with analog pictures.

But even if there were some merit in this addition of lines, what does he exactly want us to spend our time with? He has posted tons of these pictures at various forums before he was banned. And of course, I had to terminate the communication in some way, too. My understanding was that he wanted to hear on a daily basis that he is a divine genius who has found some linear patterns in everything in the Universe. Or maybe he wanted to find a scientist who just completes the details of the groundbreaking discovery – but the essence of the discovery would belong to the guy, namely the remarkable guy who could add straight lines to some pictures.

Men like that are creative (and obsessed) in some sense. And there may even be a perspective that identifies this kind of creativity (and obsession) as a close relative of some true creativity that top scientists (or artists) exhibit. But I think that something totally essential is entirely missing. The audacity and obsession aren't everything.
Luboš Motl v 12:06 PM
Share