A well-deserved triumph for Viktor Orbán

In recent years, Viktor Orbán became much more than just a reliable leader of Hungary. He became an important representative of the European people – and an important defender of the Old Continent and the European civilization who isn't just a symbol or a talking head. He has dealt with nontrivial tasks and had to do lots of nontrivial things that have earned a lot of sympathy for him in other European countries besides Hungary, too.

I didn't have the slightest doubt that his Fidesz would win the today's parliamentary elections. Well, I did find it more likely that he would improve his result. And even though some unpleasant Hungarian trolls dared to disagree with me, the reality has confirmed my words.


The turnout was some record-breaking 68% and according to incomplete official results, after 85% of votes have been counted, Fidesz seems to have gained 49.3% of the votes (it's higher than the last time when the score was below 45% and they got 131 seats) which would translate to 133 out of 199 lawmakers. That seems barely enough for Fidesz to regain the constitutional, 2/3 majority – exactly 133 deputies is enough for that.

Nationalist party Jobbik is the frontrunner with almost 20% of the votes.


Well, even if Fidesz happens to drop below the 2/3 majority, it will almost certainly form a government without any coalition partner. Congratulations to Fidesz and Mr Orbán.

Because of the elections and a certain Mr Kvasz, I was finally led to study the Hungarian alphabet. It has the extra letters "Cs, Dz, Dzs, Gy, Ly, Ny, Sz, Ty, Zs" which will be written as "Č, Dz, Dž, Ď, Ľ, Ň, Š, Ť, Ž" when some Czech-style rationalization of Hungarian finally takes place. 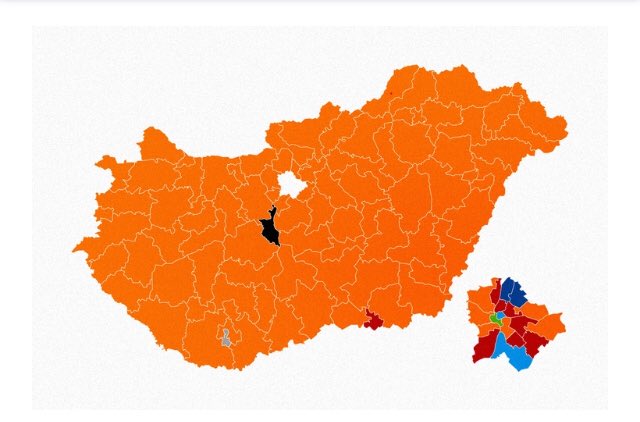 Fidesz won almost all of Hungary and most of Budapest, too.

But I still misunderstood why "Kvasz" was pronounced "Kvas" and not "Kvash". The explanation is simple: for some reasons, "S" and "Sz" are interchanged! After all, that's why the simply spelled expletive "Soros" is pronounced either "Šoroš" or "Soroš", and I am not sure. ;-) So the Hungarian "S" is pronounced as "Š" or "Sh" and if you need to write the ordinary English or Czech sound "S", you have to write the Hungarian "Sz"! That's quite weird. So when we take over Hungary, we will surely switch these two letters and the current "S, Sz" will be replaced by "Š, S", respectively. ;-)

However, if the basics of the Western civilization keep on being threatened, I am ready to surrender and spell e.g. Klaus as Klausz if it is really needed. Czech ex-president Klaus came to support Orbán two months ago, he was accepted as a top leader, and Orbán promoted Klaus' book about Migration v2.0 on the picture (Hungarian translation).
Luboš Motl v 11:29 PM
Share