Last night, it seemed that the Syrian tension was fading away. Erdogan also claimed that it did. Suddenly, we woke up on Saturday to see the news. In a 7-minute speech, Trump announced a new bombardment of Syria justified by the alleged chemical attacks. Friday 13th looked like a lucky date for that to him.

Damascus in 2010: more crosses than in the West

America, Britain, and France are participating. I was terribly angry at the beginning but was careful not to prematurely add fuel to the fire.

After a few minutes, details emerged suggesting that it's not so bad. First, Trump et al. are trying (so far successfully) to avoid the bombardment of any Russian interests and personnel – because Russia has promised to defend those. (It seems clear by now that Russia isn't defending all Syrian interests and only Syria's own defense missiles have been used to counter the 103 attacks – and in 71 of them, Assad turned out to be the winner and Trump was the loser.) Second, Trump et al. bombard "just" some (civilian and military) "chemical infrastructure". That would be bad but not so bad – not even for Assad.

The attack is being justified by claims about Assad's chemical attack in a suburb of Damascus that has targeted some 500 people. Now, I am uncertain about the very existence of such an attack let alone its perpetrator. I am half-persuaded by the Russian claims that Russia has evidence that this was staged and Britons helped in the false flag operation. In fact, even months or years ago, some people have said that a false flag chemical attack was being prepared by the best and the White Helmets (a P.R. group designed to whitewash the Islamic terrorists), see e.g. this February 2018 claim.


Now, Assad has really won the war in Syria and should be congratulated because he was the most reasonable local force that mattered. Trump et al. fail to congratulate him – and that's already a big minus for Trump. When Assad defeats Daesh and a few other terrorist groups, is he motivated to target civilians? It makes no sense.

This precise argument was made by the former commander of British forces in Iraq, General Jonathan Shaw, in Sky News: see this two-minute-long video. Why would the winner do such a thing that has the potential to reverse his victory? It's really irrational and Assad is very rational. Shaw was instantly cut off by Sky News! The female host babbled some incoherent stuff that they have to do something more important than to discuss proofs that the justification of the war makes no sense. (The much more important thing was a commercial promoting a Sky Entertainment plan LOL. A few more subscribers to the Sky Entertainment plan are surely more important than some damn Third World War. You may be sure that this form of censorship wouldn't happen even in North Korea – e.g. because Murdoch can't sell private TV plans there yet.)

It's terrible when people who actually know something – like former top British commanders in Iraq – are being censored on TV stations when they talk about something very urgent and important that they understand 500 times more than the woman who interviews them and than the aßhole who told her to cut the interview through the earpiece. (Some RT comments about this particular case of censorship. They wanted to frame Shaw – he was pushed into talking about irrelevant technicalities e.g. whether the attack needs some approval by the British Parliament given some strange connection with Russia. The female host clearly supports any U.S. attack now – after all, her name is Samantha Washington.)

Some British academics saying the same thing as myself and the general are being harassed by piles of morons, too. We already seem to live in a society where the morons have the upper hand most of the time.


Independently of the uncertainty about the alleged chemical attack, is it right to return Syria to the state of war exactly now, when it was returning to a happy life in peace? I think it's a very evil idea.

Russia is suddenly very passive in Syria which is both good news and bad news. It's good news because it reduces the odds that we will see another world war. It's bad news because Russia was the main power that was mostly trying to spread peace and justice in the Middle East. It's bad news because jihadists will surely be energized by the American-British-French attacks and I increasingly think that it's actually one of the goals.

I wonder whether Russia would enter the conflict if the Syrian presidential palace were bombed etc. In that case (and also if and when Russian military personnel were targeted, of course), I think it should. In that case, Russia should sink the American, British, and French ships in the region that participate in the operation.

Another thing I find remarkable is the degree of support that Trump immediately gets from the assorted left-wing activists and the left-wing press. They hate Trump but there is one thing they hate even more than Trump: peace. So when Trump starts a war, this scum starts to worship Trump. It's pretty disgusting. Trump should be disgusted by the dirty dicks who have suddenly penetrated into his rectum, too.

At any rate, by using some fishy evidence that Assad did something wrong, Americans feel entitled to kill real Syrians on the ground – in front of our eyes and without any doubts. Some of the people who were killed an hour ago could have been Syrian chemists – perhaps totally peaceful, innocent chemists – who may belong to the true pro-Western elite of the nation. Look how the U.S. green brains are helping Syrian science centers to thrive. It's despicable to murder such people. Macrons, Mays, and maybe also Trumps who mass murder chemists are barbarians and jihadist-style war criminals.

Also, it's despicable to bomb Damascus, one of the world's most ancient cities and one of the main world's centers of Christianity during St Peter's reign (much of it lasted; 10% of Syrians are Christians now – almost exactly the same percentage as in Czechia). This U.S. bombardment may literally help the rest of ISIS to attack Christians in Damascus. Trump is basically placing himself on the side of ISIS and similar terrorist filth.

There is almost no pro-peace left-wing opposition left in the U.S. these days. (Around 2002, I attended some Boston rallies against the war in Iraq although my feelings were mixed about the issue at that time – and I surely didn't identify with the typical participants in most other political questions. This kind of the left-wing peace movement has disappeared.) Almost everyone is a hateful warmonger. America is turning into a f*cked-up nation pretending to be really good and sensitive (and even discussing idiotically reformed gender pronouns) but harboring some of the most despicable forms of contemporary racism powered by some of the most self-evident lies and superstitions.

Now, why is Trump doing these things? It may be John Bolton who recently got to power but Trump had to cooperate and betray tens of millions of his voters who wanted to stop America's interventionism into irrelevant šitholes and who wanted to place America to the first place. Why did Trump cooperate?

It's clearly about the other direction of the Russophobia-inspired attacks, the Russian dossier.

According to some new evidence that was anonymously leaked, Trump's personal lawyer Cohen visited Prague in 2016 which he previously denied – and there has been older information that it was a different Michael Cohen who was in Prague. Now, is it a crime to visit Prague? I've lived there for 5 years and it is one of the tourists' top destinations in Europe. 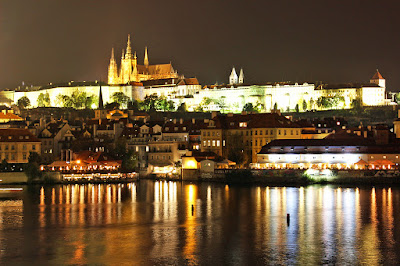 Prague has basically avoided hot wars since it was founded over 1,000 years ago. But it was a key that helped important wars to start – including the Hussite Wars, Thirty Years' War, the Second World War, the Second Iraq War, and the current U.S.-led attacks on Damascus (and Homs).

If you read the evidence carefully, you will see that there is actually no evidence that Michael Cohen was in Prague in 2016. There is only evidence that he crossed the German-Czech border. Now, Prague is just 1/8 of the Czech population and 1/160 of the Czech territory. Michael Cohen could have just visited me in Pilsen or visited the Pilsner brewery (Pilsen is twice closer to that border), among other things (beautiful mountains, rocks, historical towns like Czech Krummau, castles... Czechia is simply not just Prague). Why should everyone go to Prague? Richard Lindzen and his spouse also came to Pilsen a year ago and he thought it was a good idea. Richard Lindzen had to go to Prague (and one of the proofs is) because they came through the airport but Michael Cohen didn't.

So even the suspicious fishy anonymous leak talks about some evidence that doesn't actually say what is being said that it says.

But we're being told that Cohen negotiated with Konstantin Kosachev from the Russian Parliament (Duma). Even if all these things were true, I just can't possibly see what would be so criminal about talks with a Russian lawmaker. Can you show me the laws that imply that it is illegal for American politicians' lawyers to talk to Russian lawmakers? It reminds me of Nazi Germany of the 1930s when the Aryan Germans were prohibited from talking to the Jews – I saw those laws in the museum of the Holocaust. There were exceptions: Germans could scream at a Jew when the Jew didn't clean the staircase.

Is it where America is standing now? Is surely seems to be the case. At any rate, in these efforts to strip all Russians of their basic human dignity, I am totally on the Russian side, and if there's a conflict, I will root for Russia to kill as many American left-wing racists and warmongers as possible.

As you can see, our capital's being relevant is the only silver lining that we see. We may see that some claims about a meeting in Prague indirectly motivated the ongoing war against Syria. That's not the first time when Prague played that role, of course. The Second World War became unavoidable mainly because Czechoslovakia was betrayed by its allies. More recently, Mohammed Atta's visit to Prague was used as a proof that Iraq was behind 9/11 and a justification for Bush 43 to attack Iraq in 2002. Just like in the case of Michael Cohen, there were two Mohammed Attas linked to Prague, too. In the case of Atta, one letter that "proved" the connection was proven to be forged and the remaining evidence was probably rubbish, too.

Have Americans learned no lesson? Have they failed to learn anything despite the fact that the meeting is associated with the same Mother of Cities and City of 100 Spires called "Prague"?

By the way, if Russia decides to respond, I guess that the 3x 300 men on board of three identical U.S. warships, Porter, Higgins, and Cook, will be among the first U.S. casualties. If you have relatives there, you should start to plan the funeral and related events. Those ships have sent Tomahawk missiles (one such missile costs some $880,000). Other ships may follow soon afterwards:


In coming days, the USS Harry S. Truman Carrier Strike Group, which can carry up to 90 aircraft, is expected to arrive in the Middle East. The aircraft carrier will be accompanied by the guided-missile cruiser USS Normandy and the guided-missile destroyers USS Arleigh Burke, USS Bulkeley, USS Forrest Sherman and USS Farragut.


USS Truman (up to 6,250 personnel, 90 aircraft) could deserve a nuke, especially if the other ships are nearby.


To add additional bad news to this particular Friday 13th (which we thought to be just another superstitious day yesterday), Czech and American film director Miloš Forman died at age of 86.
Luboš Motl v 6:48 AM
Share