Sheldon and pals visited Grothendieck in his cabin

If you missed Young Sheldon, the main hero decided to temporarily become adult from his mother's perspective after his mother didn't like some blue superhero's nude buttocks in a magazine. The adulthood was abruptly ended after a tornado in Eastern Texas. 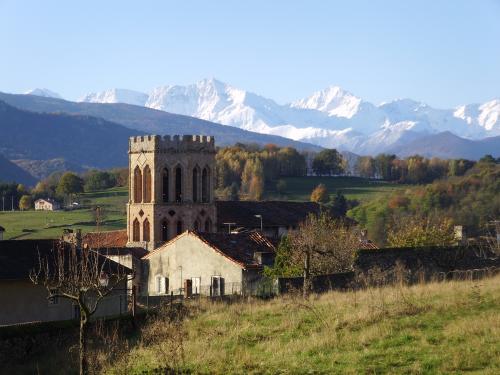 Saint-Lizier on the Salat River, near the Spanish border. Grothendieck didn't pick such a bad place to spend a part of his life.

Meanwhile, the Big Sheldon had some correspondence with Dr Wolcott, a top topologist who is interested in Sheldon's work in string theory and who lives "off the grid" in his cabin in the mountains.


I hope that David Saltzberg will appreciate that someone has explicitly articulated that they have included Alexander Grothendieck in The Big Bang Theory.

Sheldon took his three friends to the cabin. They were allowed to enter, despite their debatable level of rigor. Wolcott showed his two chairs. One of them is reserved for most of the science work; the other is the grudge chair. Rajesh loved the tomato which tasted like an apple. Wolcott shared the secret: he fertilizes it with his own manure.

Wolcott suggested to have a new approach to conceptualize dimensions in string theory. I would love to hear those ideas as well. Before Wolcott could have said anything, he had to collect everybody's phones because they're little listening devices that may steal his work. Howard joked about the old method to steal the ideas: to send prostitutes. Wolcott pointed out it wasn't funny when it happens (to him).

Too bad, we weren't shown Wolcott's notebook. If we were shown the content, we could decode it, despite its being written backwards and despite the interchange of letters with numbers.

When we were shown Wolcott's blackboard about "time", it was full of assorted copies of the \(SU(2)\) or \(SO(3)\) Lie algebra. It basically looked like the \(SU(2)\times SU(2)\) algebra underlying the hydrogen atom or a complexified treatment of the \(SO(3,1)\) Lorentz group. In either case, I doubt that I could agree that it was work on "time" and it was revolutionary.

Wolcott described the work by saying – after Leonard suggested it – that time was multi-dimensional. Well, some Itzhak Bars was there. It seems that in both cases, there are closed time-like curves due to the Euclidean signature of the multi-dimensional time which is too bad, I think. Wolcott just didn't know how to reconcile his ideas with string theory. He described his perfect marriage with a woman who lives in Munich, believes that her husband lives in Latin America, and they send birthday postcards to each other in most years.

He went to hunt for a rabbit to cook for the guests – which was easier because they said they couldn't distinguish a rabbit from a squirrel. Before he brought the squirrel, Sheldon realized that he didn't want to live like Wolcott – after all, he liked Amy and his phone – and they left. When Wolcott returned, he wasn't sure about the chronology of their coming and leaving because of his nonlinear time paradigm.

Amy and Sheldon apologized to each other that they're more ordinary folks than previously thought – and they forgave it to each other. Sweet. Amy was able to river dance, after all.
Luboš Motl v 8:54 PM
Share