Al Gore is a rule, not exception

Conservatives and especially climate skeptics love the former U.S. vice-president Al Gore because he is a great example proving the point that leftists and especially the climate alarmists are hypocritical jerks with evil eyes who can't be trusted.

Gore is such a popular example because even 84% of Democrats would love to throw him to a cesspool. And the climate skeptics may say: Have a look. All of you, alarmists, are as hypocritical evil jerks and liars as Al Gore. For years, this generalization could have looked like a demagogic one. However, The Washington Post has just informed us about a new study:


Believing in climate change, but not behaving sustainably: Evidence from a one-year longitudinal study


The authors have followed the behavior of some 600 Americans and it turned out that the climate skeptics could report more environmentally-friendly behavior than the climate fearmongers. Skeptics were more likely to use the public transportation, recycle, and do other things.


It's obvious what is the most important commentary. This topic isn't really about climatology, it's about politics, and fearmongers are those who favor a big government. Skeptics tend to support the individual freedom, the private sector, and the individual responsibility. So the fearmongers want the government to grow and save the world; while the skeptics are the people who actually try to make the world – well, more precisely, their environment – a better place by their own acts, not by calls for the government to suppress the lives of others.

Just to be sure, I know that there are exceptions – classes of hippies who really talk the talk and walk the walk and whose carbon footprint could be lower than mine which would be a really nontrivial achievement, indeed.

But in a majority of cases, this negative correlation holds. The negative correlation is a shocking testimony to our epoch's being a post-truth era. We're drowning in hypocrisy and people's words and virtue signaling have very little to do with their actual behavior. The loudest critics of carbon dioxide are among this useful gas' most intensive emitters; those who criticize racism most often belong among the most vitriolic racists; those who talk about the independence, freedom, and creativity of the kids are those who are ordering all kids to obey and do exactly the same prescribed stupid things at school at all times; and so on, and so on.

All these negative correlations between the talk and the walk can survive because a huge fraction of the people – and maybe a majority – has been attracted to this despicable game. 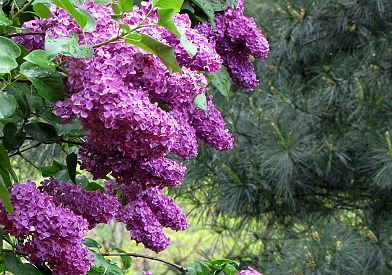 One extra comment about the climate change and weather. On May 8th, 1945, the war ended by the surrender of Germany. On the following day, the Protectorate of Bohemia and Moravia still resisted. And on May 9th, 1945, the Soviet army came to Prague. "They [the Red Army troops] were smelling of petrol and grass," a popular propagandist poem used to teach us.

On top of that, lilacs were everywhere – the early May was a delicious invitation to the era of peace. The U.S. soldiers have probably used some lilacs to decorate their tanks as well – lilacs became a symbol of liberation for the decades.

Now, it's 2018 and lilacs started to blossom days ago. The weather and seasonal cycles seem to be indistinguishable from those in 1945. On the liberation day in 1945, the low and high temperatures were 8.6 and 21.5 °C in Prague-Klementinum, Czechia's warmest weather station. You may check that the temperatures in this week are about the same in average.

We've had a dry beginning of 2018, with the exception of one month. It's not clear whether it will continue. But at least in Pilsen, everything is green and in full blossom. CO2 may be credited with some of these good news. It's higher by some 30% than it was in 1945. Plants need fewer pores which reduces the evaporation of water from the leaves, and they are therefore more immune towards drought.

At any rate, those who remember the persistent communist propaganda about the war must know very intimately that the weather conditions are about the same in the modern era as they were in 1945. If the drought continued, we could match the legendary drought of 1947 – when the Soviet Union heroically saved us from starvation, another piece of propaganda reminded us. But so far we don't know whether 1947 will be matched – so far, that bad year hasn't been surpassed.
Luboš Motl v 6:57 AM
Share