In March, the hysteria about the apparently poisoned ex-Russian spy and his daughter (the Skripals) started. There was no evidence that Russia or Russians were behind it – well, strictly speaking, I think that we haven't even seen evidence that there was any poisoning at all.

In late March, I discussed the fact that Czechia is a superpower in this type of applied chemistry. After all, among other things, we're the cradle of Semtex (there are several types of that), the most popular tool of expression for Palestinian and similar opinion makers. I have linked to a Czech paper from 2011 that discussed the chemistry of related compounds, including a recipe to make A232, a novičok-class agent. 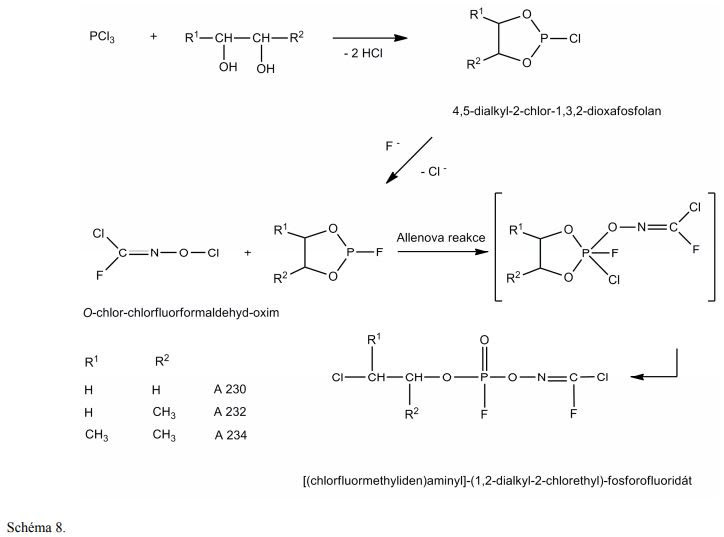 Also, in March, Czech president Miloš Zeman ordered the Czech intelligence community to figure out whether novičok has been produced in Czechia and whether it could have been abused. The military intelligence concluded its investigation and published a report.

The answer is Yes, Czechia has produced a small amount of the A230 novičok agent – or if you know some basic chemistry, you may read the formula above as methyl-{N-[1-diethylamino)ethyliden]amido}phosphonofluoridate, which is how President Zeman calls it even after a bottle of slivovitz. And it's not just some historical curiosity. That compound was produced in Czech Military Research Institute in Brno last year i.e. in 2017. See also Google News. The report also says that the small amount was also "tested" and subsequently "fully destroyed" (ministry of defense later explained why no leak should be possible).

Here you have a page of the institute in Vyškov (where they wrote the 2011 paper) that explicitly states that they're doing research with novičok, too.


The report quoted by President Zeman is enthusiastically quoted in all Russia-based media – as something that undermines London's credibility. But the same story has also gotten to numerous mainstream Western outlets.

Well, I told you so. Of course we can produce and we did produce these compounds. I could memorize the ingredients for that stuff for a minute myself, too. ;-) I think that we're not the only Western country that has played with this portion of chemistry. Sweden and Slovakia have been quoted as possible sources by the Russian authorities, too.

I don't know whether our novičok was relevant for the Skripal case. Of course, I would prefer the answer to be No. The Czechs could have studied it because of purely scientific motivations, or to study whether it works at all and/or how to defend against it. At any rate, it is true that the claims that it "had to be the Russians" has been shown ludicrous.

The fallacious reasoning – or the absence of reasoning – behind conclusions such as "it has to be Russia" is an example of the systematically spread superstitions and misunderstandings of science and technology. It's too bad that this brainwashing of the public occurs – primarily? – on our, Western side of the new apparent Iron Curtains in the world.

This system of superstitions and misunderstandings increasingly resembles the anti-Semitic myths that were popular in Czechia in the late 19th century, e.g. the blood libel. While we learn it's impossible for non-Russians to make this stuff, at least dozens of labs in the world have produced similar things. Also, the agent is persistent, unlike the sarin etc., and you may store it for years. Lots of people had the capability to produce or acquire these compounds.
Luboš Motl v 7:49 AM
Share