Two days after The New York Times insanely celebrated Karl Marx, they published a hit piece against my nation's opposition towards feminism and its most pathological manifestations such as the #MeToo campaign:


What's remarkable is that this May 2nd hit piece is a story about an innocent and amusing advertisement by the famous enough Bernard Brewery owned by Mr Bernard that was posted in December 2017, almost half a year ago: 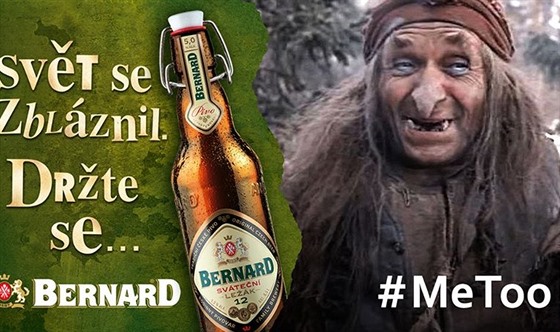 But for the New York Times, this apparent heresy is still a "story". The picture says "the world has gone mad" (like many other pictures by Bernard) and "brace yourselves". See also Bernard's Facebook page for more. The specific part of this picture is the photograph of Baba Yaga who says #MeToo. Just if you happen to be a clueless feminist sourball, I must explain why it's a good joke. It's a good joke because everyone knows that no one would ever fudge Baba Yaga. Bernard expresses the mainstream opinion of the Czechs that most of the women screaming #MeToo are lying hypocritical spoiled girls who look for an advantage.


The New York Times calls Baba Yaga "a nearly toothless old woman". That shows a pretty incredibly lack of research. She isn't just an old woman. She's one of the most recognizable old women in post-communist Europe. She's the Baba Yaga – witch – from Mrazík, a Soviet fairy-tale shot in 1964 (click for a full movie with the great Czech dubbing; the original name is Morozko).


"Jack Frost" is not quite a random Soviet fairy-tale. It's been aired in the best hours on every Christmas in Czechia since that time – and competing against the Czech fairy-tale Three Nuts for Cinderella since the 1970s. The popularity was unaffected by the fall of communism and the Soviet fairy-tale keeps on appearing on major channels during Christmas evenings every year.

The popularity is partly due to the excellent Czech dubbing. In particular, Mr František Filipovský gave his voice to Ms Baba Yaga and it's perfect. Note that Mr Filipovský is the same Czech actor who also dubbed Louis de Funes – and even in that role, Filipovský simply sounded better than the original. Here, "she" fights against Ivan who try to turn the walking, voice-controlled cottage in the desired direction.

Well, just to shock you, not just the Czech dubber but even Ms Baba Yaga on the photograph and in the movie is male "herself", the actor Mr Georgy Millyar.

Three years ago, during the film festival in Carlsbad, Richard Gere was told about the Czech TVs' habits to air Jack Frost during Christmas and he was shocked. Everyone should only watch Pretty Woman on those evenings. Well, just to be sure, Pretty Woman is also frequently aired on Christmas these days but I believe that Papa Frost is still ahead in the ratings.

Later in her hit piece, Kasia Pilat was able to figure out that the woman was taken from a 1964 Soviet film but she didn't investigate further. It really wasn't just a Soviet film. It is a legendary film and she's one of the most recognizable characters from that fairy-tale. Well, Marfusha, the spoiled ugly daughter who was cracking nuts with her teeth, was also amazing. Quite generally, the bad characters from these Russian movies are more memorable, Russians must have some talent to be extraordinary jerks. ;-)

In the U.S., if a company used that funny picture, it would also be attacked by the New York Times and similar rags – probably more aggressively than the Czech brewery. The freedom of expression has been abolished in practice in the U.S. when it comes to such matters. Thankfully, it's not only untrue in Czechia: the opinion about #MeToo that the ad conveys is a mainstream opinion and I am confident that over 90% of Czechs mostly agree with that.

Of course, the New York Times extremists could find thousands of other "offensive, sexist" advertisements everywhere in the Czech media. For example, Pilsen-based producer of strong alcoholic beverages Stock Spirits (traded at the Prague Stock Exchange) had a series of TV commercials "Even Men Have Their Days [menstruation]". One of them was this one (well, in Czech):

It's a really nicely done advertisement. Lots of other parts of that campaign were aired, and they inspired many parodies, too. One of them was broadcast by Czech Soda, a well-known entertaining program on the public TV channel. Even men have their days, we hear while two men share their experience after they simply had to terminate their wives. I guess that just because the relaxed people were men and the victim were women, that video would also be called sexist in the U.S.

A retro Kofola (legendary Czechoslovak non-Coke) ad. "Wow, Nadya. Nadya Tuczech." – "Two kofolas, please." – Nadya: "Hi Andrew [Hi Nadya], may I have a taste of it?" – When you love her [her or Kofola, ambiguous], there's nothing to solve.

As I wrote, almost everyone in Czechia agrees that #MeToo is a pathological movement and most of the women screaming "me too" can't be trusted and they're not even ethically good people. And most people would also agree that the #MeToo philosophy conflicts with the presumption of innocence, a basic European value, and once this principle is abandoned, all hell may break loose. But activists doing things such as #MeToo have acquired an almost complete control over the U.S. media and other important sectors that define the atmosphere in the society and the officially recommended public discourse. It's a form of totalitarianism.

By the way, the hit piece in The New York Times uses the word "communist" four times. In three cases, they want to suggest that our "heresy" is linked either to communism or its fall. Sorry, it's not. Instead, this kind of primitive, pathological, and self-evidently deceitful feminism of the contemporary U.S. type has never penetrated to the Czech society. It has been rejected across the regimes – from monarchy to the interwar democratic republic, the era of Nazi occupation, communism, as well as the post-communist democracy. Czechs – and Czech women – simply disagree even with the very basic suggestions of feminism such as that women are discriminated against.

Women have had the same rights for about a century, they know it, they know that the different activities done by men and women have nothing to do with any oppression, and they agree they would show their utter stupidity if they denied this fact. The New York Times claims that sexual imagery spread after the fall of communism and other things. Well, Czechoslovakia has always been rather tolerant in these matters, even during communism.

Well, for example gays were sort of a taboo (in order not to give "examples" to children etc.), as the song Global Warming (a synonym for "getting homosexual") correctly explained, but at the local level, people understood that some people were gay and gays were never really institutionally harassed just for their being gay. But the basic opinions of Czechs about these matters didn't really change discontinuously when the communism collapsed. And there was no reason for that.

In 1989-1990, we replaced a largely dysfunctional political and economic system – something that individuals considered to be "external features of their environment that they couldn't determine". We didn't replace all of our moral values – which are "internal". So new spiritual movements could have fought for Czech souls – but most of them ultimately failed and feminism was surely one of them. There's no reason why it should have succeeded. In these matters, the Czech nation is probably centuries ahead of the U.S. and others.

Hit pieces such as Kasia Pilat's unavoidably contain some "racist" component – after all, she is demonizing a nation because she doesn't like some majority view in it. Of course I think it's unfortunate to ignite similar anti-Czech pogroms among the U.S. leftists. But it's not the most important thing I worry about. The people whom I worry about primarily are the Americans whose opinions are similar to the dominating Czech views – and those are really treated badly in the U.S., probably more badly than the Czech nation because these people are effectively "really banned" from mocking the #MeToo campaign and similar things.

Pilat mentions that Czechia is among those with the highest "gender pay gap". For some reason, she doesn't inform her readers that Czechia is the most egalitarian country in the EU. I don't really think it's a good thing to be as egalitarian as Czechs are but clearly, the overall egalitarianism is more important than some questionable differences between groups claimed to be equivalent even though they're clearly not.

Last Summer, another, smaller Czech brewery Aurosa also sparked hysteria in the English-speaking press because Aurosa produces an expensive pink "beer for women". I find it insane that someone would want to de facto ban products such as "beers for women". This really amounts to the end of the basic freedoms in commerce. What's next, a ban on shoes with heels and bras? Or mandatory bras for men? Even the communists would have allowed folks to produce "beer for women" or "beer for miners" or anything else.

Proletarians and feminists of the world, lick your own aßes!


Let me emphasize that the opposition towards #MeToo is clear not only among the "ordinary" Czech people – it covers most of the opinion makers and experts, too. First titles about #MeToo found at the right-wing daily Echo24.cz:

Women will start to date fish: #MeToo campaigns continues even at Oscars
A predator wherever you look (by brilliant student Ms Lucy Sulovská)
#MeToo campaign: hypocrisy and the backlash against the sexual revolution (L.S.)
Three members of the Swedish academy resigned due to #MeToo. Sad, the king says
#MeToo is a witch hunt, 100 French women led by Deneuve say
Female #MeToo activist accused of sexual harassment

You get the spirit.

Bernard, a beer that has balls. Feminist edition. 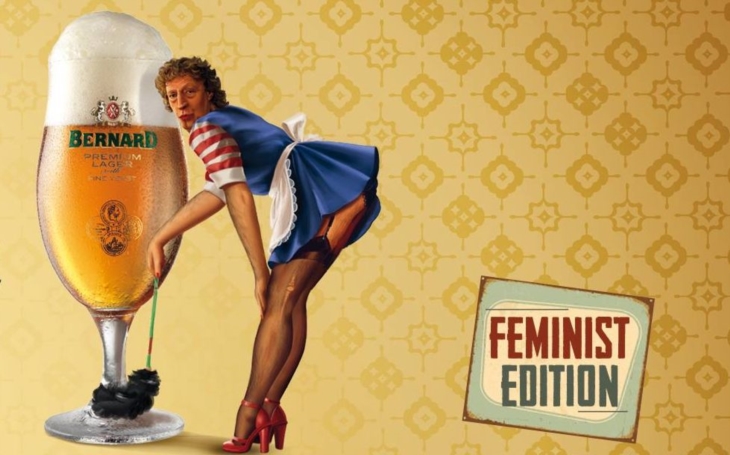 Minutes ago, Czech media started to cover the NYT hit piece. Top center right iDNES.cz mentioned that Bernard already ignited feminists by its pin-up girls in the past. There's a poll under the article asking: "Does the brewery's ad insult you?" Out of 8,000 participants so far, 1% answered "Yes", the remaining 99% said "No". I guess that the feminist insanity is so widespread in the U.S. that the result of "Yes" would be much higher than 1%.

Ms Dagmar Saidlová: (157 upvotes, 1 downvote): I root for Mr Bernard and although I am a woman, I am a principled opponent of the #MeToo campaign – it's not about women at all, it's a modern witch hunt. It's enough to accuse someone without evidence and often in conflict with the truth and you will destroy his life. Our of all the wealth, America has become nutty and it is gradually losing any contact with reality.

LM: As someone who has lived in the U.S. for 10 years, I must say Amen to that. Other posters – also with 100/0 votes or so – say that the female activists are mocking themselves and they insult genuine victims of rape into which they incorporate themselves. And lots of other wise comments... People praise Mr Bernard, go to buy a few bottles of the beer, they would be OK with President Bernard. We also hear that many MeToo activists built their careers by sleeping with men some years ago and now they want to exploit again and reclassify the intercourse as sexual violence.
Luboš Motl v 2:06 PM
Share