It was Wednesday (like today!), May 23rd (like today), 1618 (four centuries ago). For 63 years, the Holy Roman Empire had been shaped by a reactionary religious principle codified by the 1555 Peace of Augsburg: the princes (local aristocratic leaders) could order what exact church their subjects (mandatory employees) should attend.

Since 1526, the Austrian House of Habsburg possessed the Czech Crown – it means the whole territory, not just $0.05 or a piece of gold – but they respected the religious freedom and didn't exploit the 1555 anti-freedom regulation. So a very large fraction of Czechs – the nation that had supported an early, Hussite version of Protestantism since the early 15th century – was actually allowed by the tolerant Catholic Habsburg officials to stick to Protestantism.


Well, that wonderful modern co-existence applied up to 1612 when Rudolf II died. Rudolf II was a German-speaking emperor but he has been considered wonderful for the Czech interests. An enthusiastic fan and sponsor of arts, sciences, and pseudosciences has brought lots of Italian artists, crackpots to Prague – which he used as the capital of the Holy Roman Empire (in 1576-1611; the Czech capital was also the capital of HRE in 1355-1437).

Rudolf was also an expert in looking for the original of Mona Lisa, experts who can create modern forgeries, alchemists who may produce gold or elixir of youth, and he was thrilled by a golem, a 16th century Jewish robot created out of mud which is activated by the insertion of the shem, a Pokémon ball that turns you into golem's master. These wonderful hobbies of our emperor were nicely covered in the two 1952 movies The Emperor's Baker and The Baker's Emperor about the emperor and his younger lookalike, a poor but wise Czech baker.

1952 was the worst year of the hardcore Stalinism in Czechoslovakia. Stalin – dissatisfied with the political evolution of Israel – just ordered his Czechoslovak counterpart, Mr Klement Gottwald, to eradicate the Jewish/Trotskyist wing of the communist party led by Mr Rudolf Slánský; Gottwald – always terrified by Stalin – quickly obeyed the order and murdered his old friend and others. Meanwhile, top Czech actor Mr Jan Werich was playing with the Jewish golem in the movie about another Rudolf, Rudolf II, where he starred as a double role (emperor and baker). See the full first movie with English subtitles (turn them on). The movie's happy end is somewhat touchingly pro-communist (people's democratic leaders ultimately replace the emperor and begin the industrialization, using the golem as an oven if not a power station, and the ordinary people rejoice and sing) but I still think it's a great piece of arts.


If you have never encountered Rudolf II, you should really study this guy. Needless to say, he was attracted to Prague's genius loci and he has enhanced the magic of Prague significantly, too. But you may imagine that a fan of sciences like himself was considered inadequate by his mediocre relatives. So the rest of the House of Habsburg wanted to physically neutralize or otherwise sideline Rudolf II. They were looking for psychiatrists to confirm that Rudolf II was a nutcase, and so on. ;-) 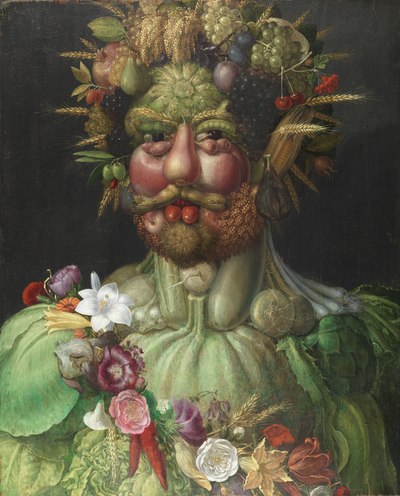 Rudolf II as Vertumnus. The painting proves that he was no nutcase.

They managed to replace Rudolf II by his brother Matthias already in 1608 or 1611, depending on the place, i.e. during Rudolf's life. OK, he moved the capital back to Vienna and under this sourball's reign, things were getting less rosy for the Czechs.

Matthias didn't have kids but chose Ferdinand of Styria (a cousin) to be his successor. And indeed, that staunch fan of counter-reformation (i.e. re-catholicization) was elected the Czech king in 1617. This guy started to give hard time to the Czech Protestant believers. They couldn't build new churches on the royal land and stuff like that.

Just to be sure, a defenestration (which means "throwing an apparatchik out of the window in Prague" in Latin LOL) wasn't a new invention – the first one took place in 1419 and helped to start the Hussite wars. OK, what happened today, Wednesday 23rd '18?

Try to think about the different times. Prague was still a key European capital, Czechs were self-confident, were much more likely to speak German than today (they didn't really care whether they were "Czech" or "German" as long as they lived on the Bohemian territory), and they had some actual political and aristocratic elite – something that was scheduled to be almost eradicated in the following 400 years.

At 8:30 am, four Catholic officials arrived to the Bohemian Chancellory – a bureau within the Prague Castle complex. Two were lucky or unimportant – Adam II von Sternberg and a Matthew Lobkowicz. Two were important and unlucky – Mr Martinic and Mr Slavata (using short names) whose names sound utterly Czech. (No one seems to care that Mr Filip Fabricius, a writer, was thrown from the window, too. He survived, went to the Old Town and then to Vienna to inform the emperor. He was rewarded both financially and by fame – the secretary became "von Hohenfall", a [count] of the High Fall.)

The emperor Matthias was apparently persuaded by someone – by Ferdinand of Styria? – to strengthen some policy against the Protestant churches. The Bohemian Protestant estates protested and Ferdinand – who was already the Bohemian king but he wasn't the HRE emperor – has dissolved their assembly. On Wednesday, they were upset and wanted to use the meeting to figure out who was behind the cessation of churches on the royal land.

OK, you should imagine some tense meetings, serious procedural arguments about how to proceed, and the Protestant estates who were really upset and looking for a culprit. They sort of spontaneously decided that the Catholic apparatchiks Slavata and Martinec (Lords Regent) were responsible for Matthias' decision to weaken the Protestant church by the new real estate policy.

Slavata and Martinec had been red and angry but they suddenly realized their situation was serious, they became pale, started to beg, but the estates needed a speedy punishment, and threw them from the window. I don't want to bother you with the letters and other annoying 17th century bureaucracy because I am sure that you prefer the action. ;-)

First, the Protestant estates demanded "the traitors to travel through the windows". They dragged Mr Martinic towards one of the windows. "Virgin Mary, protect me," the Lord Regent screamed in Latin before he followed a 17-meter trajectory dictated by the laws of gravity. "Edle Herrn, da habt Ihr den anderen," says Count Mr Henry Matthias Thurn, a Protestant leader of the uprising (picture above), calmly. It is German for "Distinguished Gentlemen, here you have the other one." OK, Mr Slavata felt down, too.

Should you believe that Virgin Mary can help Catholic officials? In that case of 1618, you should have, because both guys have survived. The Czech (understandably anti-Catholic) legend usually says they landed on a heap of feces which saved their lives. Other people have said that it was a pile of trash that did the job. In reality, they survived because of a long slope underneath the window. Both guys immediately hid in the rooms of a female aristocrat Mrs Polyxena von Lobkowicz (wife of chancellor Ash von Lobkowicz). Martinic dressed himself like someone else and escaped to Bavaria "tonight" (the evening of the same day); Slavata enjoyed Polyxena's hospitality for another year and then moved to Saxony.

This happy end of the second Prague defenestration's victims wasn't a happy end for Europe, however, because the speedy trial was claimed to violate some European standards, tensions continued, and Europe was drifting towards the Thirty Years' War. "Tomorrow", one day after the execution-turned-farce, the Czech Protestant estates sent an apology to Matthias in Vienna and he was ready to negotiate (the Czech Protestant bosses were also forming a Board of Directors to govern Czechia; they had several promising candidates for a new, Protestant, Bohemian king; Albrecht of Smiřice died of tuberculosis already in 1618 – what a loser). However, Ferdinand of Styria – already the King of Bohemia – didn't want to hear anything about the negotiation.

The rebellion had to be punished, Ferdinand insisted, and hostilities started soon in 1618. The Czech Protestant aristocrats (and their foreign allies) lost the key 1620 Battle of the White Mountain (near the Prague Airport) and 27 of their leaders were spectacularly executed at the Old Town Square (near the Astronomical Clock that has already been there for 200 years) in 1621. A similar execution would surely be exciting for thousands of exotic tourists these days. This execution and other events started to downgrade the Czechs to – politically and culturally – 2nd class citizens. The eradication of the elite was far from over. Aside from the post-1620 re-Catholicization, the execution of the Falcons and Czech resistance leaders under the 1939-1945 Nazi occupation, the expulsion of the ethnic Germans in 1945, and the Stalinist executions after 1948 and in the 1950s, our nation had to undergo the massive post-1948 and post-1968 waves of emigration in which most emigrants were "more skillful people than the average".

This window (in the Louis wing of the Jagiellonian [Old Royal] Palace of the Prague Castle) should be the window from which both guys were thrown. The Louis wing is in the center of this 3D model. Google 3D model.

The previous, 16th century was full of wars – the Dutchmen, Spaniards etc. The Catholic League and the Protestant Union disliked each other and there were clashes inside both sides, too. Everyone hoped that the 17th century would bring peace. Well, it didn't happen. Bohemia – which hasn't been a focus of the people's thinking because of its 200-year-long religious disunity (because most Europeans assumed that the religiously homogeneous, staunch sectarian kingdoms should spark wars) – turned out to be the time bomb, after all.

Among the wars (i.e. not counting plagues and famines), the Thirty Years' War was the worst medical catastrophe of Europe at least in recent 1,000 years. Population losses were as high as 50% at many places – and all of that started by an innocent (and ultimately not lethal) argument at the Prague Castle. You should think twice before you argue with someone at the Prague Castle, the consequences might be far-reaching. Sadly, the Prague Café hasn't learned this lesson yet and it continues to argue with the Prague Castle (i.e. with the Czech president).
Luboš Motl v 5:56 PM
Share