Chemnitz: for media, a broken migrant's nose is a bigger story than a brutal murder by a migrant

Chemnitz is an East German city of 250,000 located 30 miles from the Czech border. During the communist epoch, we could travel there and buy some plastic products, a category of goods in which our East German comrades were leaders. ;-) The word "Chemnitz" is a Germanized version of the Slavic – Sorbian (the Sorbs have been almost completely Germanized) – name "Kamjenica". "Kamen" is a Slavic word for a stone; "-ica" is a derived feminine noun, a girl of a sort. In Czech, we call the city "Saská Kamenice" (the name is analogous in Polish) which I happily translate for you as the Saxon Stony Brook; the derived girl happens to be a creek in this case. I hope that you – especially the readers from Long Island – will enjoy using this new Czech-English name of the city. 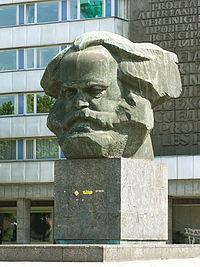 During communism, the city was named Karl-Marx-Stadt after a notorious drunkard. His bust sits in the middle of some way too familiar, ugly socialist architecture. This is actually where the protests have mostly taken place. Which protests?

On Sunday morning, Daniel Hillig was brutally stabbed to death. He was a 35-year-old, well-known, active yet peaceful, fan of Chemnitzer FC, the local soccer club. His mother is German while his father is Cuban – but you may see that his name looks rather German. That's what I call successful integration.

Yousif Ibrahim Abdullah and Alaa Sheikhi, a 22-year old Iraqi and a 23-year-old Syrian men (in this order), did it. The victims were stabbed dozens of time, probably by both culprits, and aside from Hillig who died in the hospital rather soon, two other injured folks' lives were threatened (I hope they're better now).

(Update Friday: the younger Iraqi man has gotten residence in Germany by providing them with two completely counterfeited documents. His criminal record is full of alcohol, drugs, traffic violations, and pepper spray used against refugees in a center.)

The motivation for the stabbing wasn't quite clear. There were rumors that Hillig was defending a woman or women. I think that it hasn't been settled in either way.

OK, it's just not shocking that protests immediately started. In some recent elections, Saxony was the #1 Bundesland when it came to gains of AfD, the anti-mass-migration Alternative for Germany. AfD received a whopping 27% of votes in Saxony (a map). So much like in the Visegrád Group and other countries, many if not most people actually do think about the demographic aspects of similar murders.

From Monday, there were daily rallies – about 5,000 protesters labeled as "far right" were facing about 1,000 left-wing counterprotesters. You know, I don't always find these anti-migration demonstrators likable and I don't approve all of their chants but I dislike many of the left-wing protesters, too. I think that the constant negative labeling and the associations of the anti-migration demonstrators with Nazism and other things is just a painful type of propaganda.

Many of these people are just sensible people like us who see at least the most obvious consequences of the contemporary German asylum policies. Most of them aren't contestants in beauty contests – in fact, most German citizens aren't contestants in beauty contests – so they look the way they look. Is it right to focus on their appearances? I don't think so.

These people really don't want to get used to regular stabbing in the Saxon Stony Brook. Or in Dresden. They mainly want the immigration and asylum policies of Germany to be changed accordingly. Angela Merkel treats them as the main enemies. In her first reaction, she placed the demonstrators and the killers in the same sentence. She denounced the "murder and the hatred on the street." Given the fact that the "hatred on the street" was mainly a protest against the decisions that made such a murder much more likely, her pronouncement may be considered analogous to the well-known joke "I hate racism and n*ggers." It's just not consistent, Angela. You are full of šajze.

The demonstrators feel that they must take the discouragement of the Muslim migration to Germany into their own hands. In Wismar, on the Baltic sea, an alien suffered a broken nose and bruised face and upper body by three assertive antagonists of the Muslim immigration.

Such events don't happen in an ideal world but Germany is not an ideal world (anymore?). What I find remarkable is that the "broken nose and bruised face and upper body" of the migrant has gotten much more exposure in the media than the brutal stabbing of Daniel Hillig. Is that really appropriate? Isn't it obviously correct to describe such a body of journalists as "Luegenpresse" (Lying Press)? I think that regardless of the historical connotations, it's an obviously accurate description. If you're one of these inkspillers who "cover" the stories in this staggeringly skewed way, do you at least understand why millions of people consider you scum and they wish you the worst?

One more event has taken place in the Saxon Stony Brook in recent days. The arrest warrant was leaked. It's a federal crime in Germany to leak an arrest warrant that is investigated at the moment. Nevertheless, someone leaked it and the important folks in the anti-migrant groups could suddenly reveal some known details about the murder.

(Friday update: a prison officer, Daniel Zabel (39, pic), has admitted to leak the arrest warrant. He was fired, will face extra troubles, but he should get top German medals.)

Now, the media and the German politicians pretended to be shocked. There is a suspicion that there must be a "mole" who is ready to leak arrest warrants to the "far right". Holy cow. Are you really surprised? Let me remind you that AfD got 27% votes in Saxony. The percentage of supporters of AfD – or anti-migration policies – is almost certainly much higher among the cops. Recall that in recent presidential elections, 51% of French police officers voted for Marine Le Pen.

The sufficiently regular cops who do their work in the terrain know what's going on. They know that they're at risk when they encounter a sufficiently bold, disobedient exotic criminal. They are unlikely to spread "beautiful lies" because their lives are among the first ones that may end due to some exotic immigrants who aren't really law-abiding. SJWs who live at safer places and work in safer occupations may ignore that risk – they don't really care when some cops are killed, maybe they're happy whenever that happens – but the cops themselves do care. The risks, experiences, patterns, and correlations are way too real. They're parts of their everyday experience.

And these cops simply don't believe the official German authorities much. They think that some people connected all the way to Angela Merkel's government are covering the Islamic criminals. There are lots of reasons to be convinced it's the case. But I still find the case of Anis Amri to be the most shocking one. What Germany has allowed to that mass killer is just flabbergasting.

Recall it was a Tunisian man who killed lots of folks by a truck in December 2016. OK, he stole a car in Tunisia and got 5 years in 2011. But he avoided the prison by taking a boat (along with a few buddies) and moving to Italy. He did some robbery there, arson in a refugee center, and he burned a school. In total, he spent 4 years in 6 Italian prisons. In 2015, he moved to Germany and oscillated between Berlin, Freiburg, and North Westphalia. In Berlin, he was registered as a construction worker. The authorities knew he was selling drugs in the notorious Görlitzer Park, fought a competing dealer with his fists, and planned a robbery to get weapons.

They knew he was using 10 or so identities, was meeting a Salafist priest linked to the Tunisian beach massacre, but only after very many months, someone decided to deport him. Nothing happened for additional months, anyway. So in December 2016, he stole the Pole's truck, killed lots of people with it, and left his ID with a photograph on the place of the mass murder. No one cared to find the ID and use it – maybe this "Gentleman's" personal privacy would be threatened if someone cared. So after the terror attack when we were already reading about it, he went to the most likely radical mosque in Berlin – across the street from a police station – and had some fun there. He continued to enjoy his time in Germany and he traveled to many other German places. Only 4 days after the attack (19th-23rd of December, thanks, Oldo), cops had the decency to finally shoot this monster dead, after the mandatory slur "Allahu Akbar". But it was the Italian cops, not the German ones!

This story looks like a parody. But it's reality – it is just the most extreme example of the selective (and apparently deliberate) impotence of the German authorities that is seen in many other situations. There is clearly an institutionalized system that tries to help the Islamic folks, including criminals and terrorists, and hurt everyone who is against them. I think that most cops in the Saxon Stony Brook and similar cities just don't believe that they may rely on such a system. It's possible that these two murderers could be freed by the system, too. That's why the cops found it important to (risk their freedom outside jail and) leak the arrest warrant including the names and other known details. If the German institutions fail once again in the enforcement of the laws, someone else will enforce the law informally.

This method to rely on a backup plan and unprofessional enforcers of justice isn't how it works in countries with a well-functioning rule of law. But Germany is no longer one. When it comes to dealing with the Islamic criminals, Germany has turned into a failed state and it's a matter of common sense that lots of the German cops realize this point, don't consider the Merkel-led authorities to be reliable partners, and are willing to find more reliable partners instead.