During the night between August 20th and August 21st, 1968, i.e. exactly 50 years ago, Czechoslovakia was invaded by the troops of 5 Warsaw Pact countries led by the Soviet Union (the current president Zeman has provoked many by pointing out that the Ukrainians were heavily overrepresented in this "Soviet" portion of the occupying forces). In the maneuver technically named Operation Danube, Soviets were accompanied by Poles, East Germans, Hungarians, and Bulgarians. Yugoslavia and Albania had already been separated from the Soviet bloc for years. Romania wasn't but its leader Ceausescu boldly refused to participate at that time. 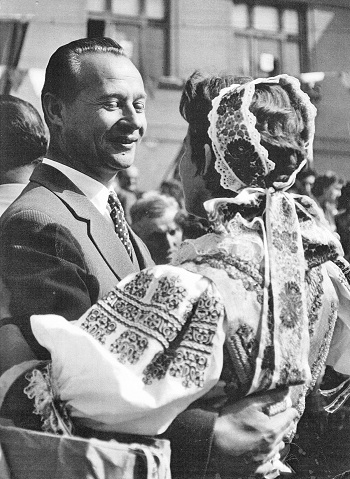 Alexander Dubček, a softcore Slovak communist who led the Czechoslovak Communist Party during the Prague Spring, the first communist in the Christian Heaven, as an article put it. Around 2000, a U.S. taxi driver has taught me that his death in 1992 was engineered by the "multinationals". ;-) Over the years, I drifted to thinking that this amusing chap was less nutty than originally thought.

The year of socialism with a human face, democratization, liberalization, and solid steps towards democracy and capitalism – the so-called Prague Spring (when pro-reform softcore communists were formally in power but truly non-communist folks had already a huge and growing influence over the public discourse) – was abruptly ended by 500,000 troops who were brainwashed to believe that they were going to stop a violent counterrevolution. Czechoslovakia used to have a really nontrivial, large, advanced army so it could have inflicted huge losses to the enemies. But at the end, no one doubted that any defense would be suicidal. We didn't defend ourselves in 1938 and 1939, so almost everyone agreed that there should be no organized violent defense in 1968, either. Although the radio stations were truly patriotic, they kept on repeating "Don't try to physically resist the enemies". That pragmatic approach is a part of the modern Czech national character. This apparent lack of courage – or the victory of pragmatism over pride and emotions – is sometimes embarrassing but I would still say that the overall sign of it is positive. It's one of the reasons why people may still admire the historical heritage of Prague, among other things.

It was five years before I was born. I was partly born due to the pro-natality policies of the post-occupation president Gustáv Husák – so my generation is referred to as Husák's children. Despite my flawless right-wing credentials, I can't eliminate the gratitude to these pro-Brezhnev comrades for my life, of course. ;-)


There's an unofficial law in the Czech history that almost all important historical events occur on years 8 modulo 10. So as the laymen unfamiliar with the \(\ZZ_{10}\) arithmetic say, the historically important years end with the digit 8. ;-)

I am pretty sure that if you attributed reasonable weights to the historical events, the anomalous overrepresentation of the digit-8 years would amount to a five-sigma discovery. Just for fun, here is the list of the important digit-8 events in the Czech history:


It's really incredible, isn't it? Almost the whole Czech history – with the notable exception of the Hussite wars and the 1989 Velvet Revolution – took place on years 8 modulo 10. Let me remind you that we live in 2018 now and there are still over 4 months to go.

Let's return to 1968. OK, I was minus five years old. My mother was going to work in the streetcar and someone screamed: "They are already here!" She responded: "Who is here? The West Germans?" ;-) Meanwhile, my father was serving in the army. He's proud to have been sent to deliver a message to the Soviets. That's the Czech courage – the courage within the limits of the law.

In the past, I have embedded lots of videos about the occupation itself, with the pictures of the troops-savages from the other countries that were facing dissatisfied, much more culturally advanced and peaceful, Czechoslovak civilians.

But let me discuss the peaceful side of 1968. Věra Čáslavská won 4 gold Olympic medals on that year, she already had 3 gold ones from the 1964 games and 4 more silver medals were won in the 1960-1968 Olympic games, too. Her medal tally hasn't been beaten by another gymnast, male or female one, yet. She became a natural face of the defiant liberal Czechoslovakia among the world's sports fan. She died 2 years ago.

Let's look at the culture.

Here you have the top 1968 songs as played in Czechoslovakia, both in Czech and English.

1. The Prayer for Marta quickly became a musical symbol of the resistance against the occupation. The musical theme is rather sad and the lyrics starts "Let the peace stay with this landscape." Ms Marta Kubišová, a top singer up to that point, "had to be" downgraded to a clerk in a vegetable shop for the following 20 years. Unlike her much more opportunist ex-friend Ms Helena Vondráčková who continued as a pop music star, she couldn't keep her appearances and voice in a perfect voice. But she briefly returned in 1989 and we were singing this song again, among others.

2. Karel Gott - Lady Carnival. Gott was becoming the evergreen of the Czech pop music. He won the "Golden/Czech Nightingale" contest – ordinary people vote for the best singer – over 40 times in the following years. He's made quite some career in the German-speaking countries, too.

5. Golden Kids - Časy se mění (The Times They Are A-Changing). Golden Kids was a trio involving the "rebel brunette" Ms Marta Kubišová, the "opportunist blonde" Ms Helena Vondráčková, and a gentle guy in between Mr Václav Neckář who later recovered from a stroke. They recorded lots of wonderful songs around 1968.

6. Waldemar Matuška - Slavíci z Madridu (Nightingales of Madrid; Le Rossignol Anglais). Matuška was the main "macho singer with a beard" of that time. He emigrated to the U.S. in the 1980s. Over there, his career didn't continue at all. He sometimes sang for a pint of beer in the pub and he was almost a beggar. Fortunately, his wife turned out to be a millionaire as a real estate agent. ;-) Funnily enough, Matuška and his mule appears at 1:08, 1:33, 2:23 of Cross the Jordan "the 1968 guide for emigrants", both of them are apparently crossing the Jordan. :-D Matuška is seen for almost 1/2 of the duration of the "Jordan" video! You may also check what the 1969 Finnish remake of the original Czech song sounds like. ;-)

7. Engelbert Humperdinck - Am I That Easy To Forget

8. Helena Vondráčková - Přejdi Jordán (Cross the Jordan River). To cross the Jordan sounds pretty Biblical. But if a modern Czech listens to the song, she seems to urge everyone to emigrate. If you have an open mind and any skills, run, baby run, take your bags and run. Chorus: Cross the Jordan, the river of all the hopes, don't wait when you sacrifice your life for the tyrant etc. I said that this blonde was very "flexible". But with this "guide for emigrants", she could have had problems, too. But she didn't. Incidentally, Jordan is a river and a country but in Southwestern Bohemia, there are various ponds called Jordán or Jordánek (Little Jordan), too – we visited one a week ago. Incidentally, Vondráčková was also rumored to date the ex-president Czechoslovak prime minister Štrougal. That was probably BS – perhaps caused by Štrougal's daughter's being a similar blonde.

12. The Mamas And The Papas - Dream A Little Dream Of Me

14. Olympic - Želva (The Turtle). It's not too easy to chase a turtle on the bottom. Olympic led by Mr Petr Janda remained the top Czech rock band for decades but since the 1980s, lots of competition began to emerge.

I omit the remaining five in that list. My point is that you may verify that Czechoslovakia was extremely tightly incorporated into the Western culture in 1968. That's how people felt and the communist regime totally tolerated it since January 1968. All important Western movies go to our movie cinemas, lots of songs got Czech remakes, and there has been a lot of similar original Czechoslovak production, too.

Here you have the best movies of 1968 – some of them are truly excellent Czechoslovak films, comedies, fairy-tales, dramas. Even if I search for full Czechoslovak movies filmed in 1968 and available on YouTube, I get an incredibly long list. 1968 was really a year when culture flourished in Czechoslovakia. In some measures, the cultural life was more vibrant than today.

The occupation meant that the trend was stopped and destined to be reversed from the top. It doesn't mean that all Western things were immediately banned etc. Good movies continued afterwards etc. But the political freedom disappeared. The people (hardcore commies and opportunists) who had criticized the Prague Spring were getting to the top, people connected with the most promising changes of the Prague Spring were fired, forced to emigration, and so on. My uncle, mother's brother, and his wife emigrated to Australia in 1969 (his father and my grandfather, an academic painter, was urging him to do so and succeeded), my father's brother, the uncle on the other side, emigrated to Bavaria with his family in the early 1980s. Obviously, my family background has been overexposed to the Czechoslovak history but the history was real and far-reaching, anyway: 300,000 (2%) people have emigrated from Czechoslovakia in the wake of the occupation 50 years ago. That's enough for every class's reunion to deal with 1 emigrant in average.

The 1968 invasion itself – despite the presence of 500,000 troops in total in several waves, as I mentioned – only led to 100 casualties on the Czechoslovak side, mostly civilians, and (fairly enough) 100 casualties on the enemy's side. Deaths are tragic but as a program on Radio Free Europe that I listened to in the mid 1980s argued, and I still agree with it, this number was shockingly small in comparison with the political implications of the occupation. In that sense, even this event of re-Stalinization was another "almost Velvet" event in the Czechoslovak history.

Hardcore, unreformed, uncreative communism has continued for additional 21 years in a rather important country on the boundary of the Soviet bloc. Things could have been different if the occupation had been avoided in some way. Czechia would probably be wealthier than most Western European countries by now. And I wouldn't be around because, let me remind you, I would probably not be born without some post-occupation communist social engineering. ;-)

While Czechoslovaks were enthusiastically plotting their journey back to democracy and capitalism, the West was experiencing seemingly similar revolutionary events in 1968 – think about French student strikes and mess at UC Berkeley. But as I kept on thinking about those events, I was increasingly certain that it's right to say that what was happening in the West was the almost exact mirror image of what was happening in Czechoslovakia. These young Western folks laid the foundations of the disgusting, brain-dead, politically correct, globalist, neo-Marxist "mainstream" that is so powerful in most Western countries these days. So while Czechoslovakia – a corner of the (then) East – began its transition to the West in 1968, the West became its transition to the East.

So aside from some good arts, the only really good event that took place in the West in 1968 was the birth of string theory. Thank you, Dr Veneziano.
Luboš Motl v 8:30 PM
Share