Municipal elections: our only oligarch loses Prague, shock, and awe

One-half of the TRF readers are American citizens where the two-party system is alive and kicking. I think that all of the Yankees must be puzzled about the following map of the results of our local elections that took place between Friday 2pm and Saturday 2pm: 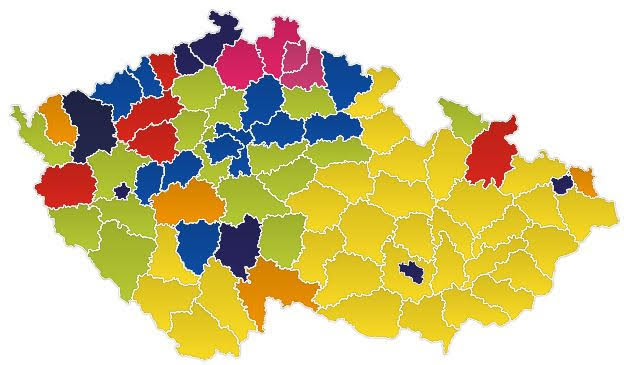 This is Czechia (in the heart of Europe), not Czechoslovakia. Czechoslovakia split up in 1993 because Slovaks didn't drink enough beer. In the "eye of the Bohemian fish" on the left side, you can see the blue Prague. In general, the map shows the political party that won the largest number of votes in each district. The "number of votes" may be a rather confusing quantity, however, because the number of representatives at the local city halls as well as the number of candidates that were running for a party may affect it.

Also, some city halls are more important than others. And one color – the totally non-uniform body of totally independent candidates – is not shown at all. They would have won almost everywhere, with some 50% of votes. The smaller town or village you consider, the more power goes to the local politicians who aren't affiliated with the nationwide political parties. This fact surely makes the interpretation harder but if I think about it, I think it's mostly right that the local "politics" – like new parking lots – is being settled by people who don't care about the high-tier politics in Prague.

OK, the colors show that strongest political party in the districts. Most of Moravia (the East) and much of Southern Bohemia is yellow. No, thankfully, it's not rape for biofuels; it's the Christian Democratic Union – Czechoslovak People's Party (KDU-ČSL), a counterpart of Germany's CDU of a sort (but somewhat less radically SJW-oriented). It's the most pro-consensus standard party – also the main party trying to improve the relationships with Germany a bit more excessively.

This huge territory is yellow because KDU-ČSL really dominates the countryside, especially the still somewhat religious countryside in Moravia where they drink wine instead of beer. And as we can see, they are also getting rather strong in the rural Southern Bohemia where the people drink milk instead of beer. ;-) Most of the small towns and villages where they won are inconsequential for the life of urban Czechs, I think.

Analogously, a rather big chunk of mostly Bohemia is light green. Those are the "Mayors and Independents", a bloc that is rather non-ideological – which makes it unreadable in Prague – but that defines itself as a full-blown political party, anyway. So that's why they couldn't have been treated as the true "independent candidates" and they were shown colors. But their "ultimate centrist" ideology or non-ideology makes them rather close to KDU-ČSL – their relationship to Christianity is weaker, however, just like you would expect from the fact that Bohemia is (even) less religious than Moravia.

Fine. Yellow and light green is somewhat "politically neutral", made of people who only build parking lots or bike paths. Well, there is actually yet another color that may be classified like that. Four districts in Northern Bohemia are pink – that's another special "Party of Mayors" that is regionally confined to Northern Bohemia.

The perspective of high-tier politics only starts to be relevant if you look at large enough cities. The larger cities you consider, the more aligned the powerful politicians should be with the nationwide political parties. In those cities, the winner is mostly ANO owned by the former communist and oligarch Andrej Babiš, the current prime minister. But before we get there, let's look at the whole map again because there are some regular ideological parties on it.

The red color is the communists – they won the highest number of votes in four, mostly poor but not necessarily "exactly the poorest", districts. Orange is diluted red (diluted communism). It's the social democrats who also colored four districts above only. Both communists and social democrats have almost disappeared from the map. In Prague and many other important cities, neither communists nor the social democrats have made it to the city hall at all! The traditional left-wing voters (if you ignore the geeky-postmodern-leftist Pirates who only succeeded in Prague) were almost completely devoured by ANO, the oligarch prime minister's movement.

Like in every elections in my life with a single exception of the polls for the European Parliament (when I voted for Libertarian Petr Mach and he got there), I voted for the Civic Democratic Party (ODS) founded by Václav Klaus in the early 1990s (his relationships cooled down dramatically a decade ago, due to ODS' centrist movement, but he's no longer too angry and he even voted for ODS recently again, partly because his son Václav Klaus Jr is the main guy representing the patriotic and non-PC wing of ODS). It's the "pure blue" color – neither too light, nor too dark, just the proper blue that deserves the word "blue" more than any other color you could pick (couldn't I just say #0000FF?). On the map above, ODS got an impressive number of 11 districts, mostly a strip that goes through Prague. Some 5 years ago, lots of people were saying that ODS was dying and disappearing – after ODS was linked to some economic crime in a series of witch hunts and fake news that remained popular among the permanently dissatisfied and jealous citizens, however. That process has clearly stopped and ODS – led by the excessively formal Prof Petr Fiala, a social scientist who is OK enough with me because he obviously isn't a radical SJW – is regaining the status of the main opposition party against the oligarch left-wing ANO movement.

The dark blue or violet – start with the pro-capitalism blue but add lots of fascist brown and the communist red – is ANO, the main left-wing party today. They got 7 places on the map above, including the Pilsen-City district of mine. But one must say that in Pilsen, ANO and ODS were almost statistically tied. However, ANO got the highest number of votes in almost all of the 14 largest cities. Liberec (in Northern Bohemia) is a possible example.

However, there's one rather subtle counterexample among these cities which is called, you know... Prague. ;-) In the Czech capital, ANO has spent over $2 million on the campaign (the spending isn't limited by the law in these particular elections) but what they got was... the fifth place. ODS won and 4 other parties were almost equally strong. 3 of these parties (the politically correct conservative TOP, the Pirates, and one Disneyland-cartoon-style ad hoc bloc "Prague to Itself" [the National Theater's curtain paid from donations says "Nation to Itself"] led by teacher Mr Čižinský) are expected to team up and expel both ANO (which had an unsuccessful mayor in recent four years or so) as well as ODS (which has had a mayor of Prague throughout most of the new capitalist era) from any significant influence over the Prague city hall. Most people expect the coalition of the politically ill-defined blocs to decompose soon, however.

In Pilsen, ANO won but ODS got almost the same number of votes. We've had a social democratic mayor of Pilsen as well as the suburb Pilsen 4 for a few years (I could think of no tangible complaints) – due to the social democrats' lousy results, both will probably end.

Because I surely consider the left-wing ANO's ambitions to become a new party with the nearly complete power to be the greatest purely internal present threat facing my homeland, I am rather happy about the colorful, motley results as indicated by the map above. I am also rather happy about the apparent disappearance of the social democrats and the communists. ANO replaces these two parties on par. However, it seems that the ANO fad is already fading away and ANO may disappear from Czech politics along with its owner comrade Babiš/Bureš (both surnames are being used for our prime minister, the second one is the codename of an agent first used by the communist secret police).

If ANO were reincarnated as neither communists nor social democrats, it would be a huge progress.

There were also Senate elections in which 1/3 of the seats were refreshed. ODS seems like the strongest contender for the second round. Two candidates – failed PC presidential candidate Mr Drahoš and an atypically anti-migrant and popular KDU-ČSL member Čunek – became Senators already now, after they have secured over 50% of the votes in the first round. The second round will be "mostly" a contest between ODS (which seems strongest) and ANO and I believe that ODS will become the clear winner of the 2nd round.

I have always been a defender of the Senate because just like the lawmakers who had designed it, I saw it as a more conservative force in Czech politics, with a greater inertia, that is capable of defending the constitutional order against some aggressive short-lived non-democratic fads that could otherwise have long-term consequences. I think that we've living in times when this exact viewpoint is being vindicated. It seems that due to the different "rhythm" of elections into the Czech senate, as well as the quasi-majority system over there, Babiš's ANO is simply failing in trying to become an important party of the Senate at any point.

Because the Senate's approval would be needed to change the constitution to say that Babiš is our beloved leader and ANO is the most important political force in the society (and Babiš as well as most of the 1.5 million of his stupid sheep would undoubtedly love such a change), we could say that the Senate is really enough to defend democracy in Czechia. And that's surely a sufficient justification to pay a bunch of extra lawmakers.

Well, these municipal and Senate elections probably show too optimistic a picture. The turnout was 47%. In the regular Parliamentary elections, the turnout will be higher much like the percentage of the brainwashed protest votes.
Luboš Motl v 11:15 AM
Share