Although it's just a bunch of conventions, I have been sort of excited about the systems of units – and the SI units in particular – for more than three decades.

The most recent blog post, one from July 2017, announced plans to redefine the fundamental SI units so that some universal constants become known constants, much like \(c\) which became \[

\] after a 1983 reform of the SI system. In particular, I have rooted for a reform that would turn Planck's constant \(h\) to a known constant since my childhood – but a clear blog post from April 2012 is the most explicit thing I can link to.

The dates have been determined for years... and it just happens that next week, a meeting (26th meeting of The General Conference on Weights and Measures, November 13th-16th) takes place in Versailles, France. A vote will take place over there. If the prevailing result is Oui, we will be able to memorize Planck's constant, without any error margins.

The Science Magazine's Adrian Cho has some fresh details:


Metric system overhaul will dethrone the one, true kilogram


Most importantly, the 1-kilogram platinum-iridium alloy will be thrown away to the French sewerage system. Instead, one kilogram will be defined indirectly so that Planck's constant will be\[

\] exactly. Note that the Wikipedia page on the Planck constant quotes the most accurate measurement as ...70040(81) instead of ...70150 which is chosen in the newly proposed definition of the kilogram. For some reason, the soon-to-be-permanent value of \(h\) was shifted to a slightly higher value. Note that the relative error margin of the \(h\) measurements is about \(1.1\times 10^{-8}\).

Just like the platinum-iridium cylinder will be thrown away to the dumping ground, the laboratories that measure \(h\) may also be thrown to the garbage bins because the value of \(h\) will be perfectly known without them. Alternatively, the experimental physicists may rebrand themselves as the people who measure the mass of a platinium-iridium object thrown away to the French river – note that their result will no longer say that this platinium-iridium object was "exactly" 1 kilogram by its weight.

Fundamental physicists surely think that the reduced Planck constant, or the Dirac constant \(\hbar\), is more fundamental or more natural than \(h\), and maybe that one should have gotten a simple rational value in the SI units. But you may still use \(\hbar = h / 2\pi\) so its value will be precisely known, too.

Aside from the kilogram, one ampere, one kelvin, and one mole should be redefined to peg other universal constant to known values. Those aren't quite the values \(1=c=\hbar=N_A=k_B=\epsilon_0=\dots\) used by the adult physicists – but fixed known values different from \(1\) eliminate the uncertainty just as well as the values equal to \(1\).

I believe that this page, physics.info/constants/, already contains the newest (red) truly constant values of the corresponding universal constants whose error margins will be set to zero. Aside from \(c\) and \(h\) mentioned above, we might have:\[

Next week, I would surely vote Yes for this reform – well, I consider myself a long-term proponent of this kind of a reform. Universal constants are constants appearing in the fundamental laws of Nature and play a similar role as \(\pi\) or \(e\approx 2.718\) in mathematics. If they may be made perfectly precise with a choice of units, they should be. 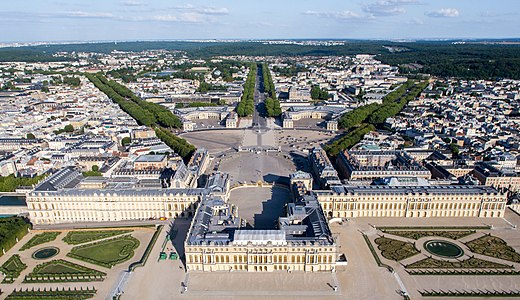 For the normal people, nothing will change at all. The physical constants will have more or less the same values, within error margins that are narrower than the normal people may distinguish, and the SI units will have the same meaning as before. The reform will only affect the life of the experimenters who were capable of measuring the constants with the globally competitive precision. They will have to translate their measurements to the new units and realize that it's different numbers than before that will inherit the relative error margins.

Versailles. With all this useless wealth, why wouldn't you throw a dull platinum-iridium cylinder to the trash?

The relative precision of the measured Planck constant is about 3 times worse than what the speed of light was right before its numerical value was fixed. But it's not such a big difference. We often can and need to measure distances and durations with the accuracy of \(10^{-15}\) or so – but the masses? Every quantity that has a "kilogram" in it is just fine with the \(10^{-8}\) precision. Think about milk in the supermarket.
Luboš Motl v 7:46 PM
Share