Some three days ago, the Pew Research center released a report on the European nations' attitudes towards Muslims and other things: 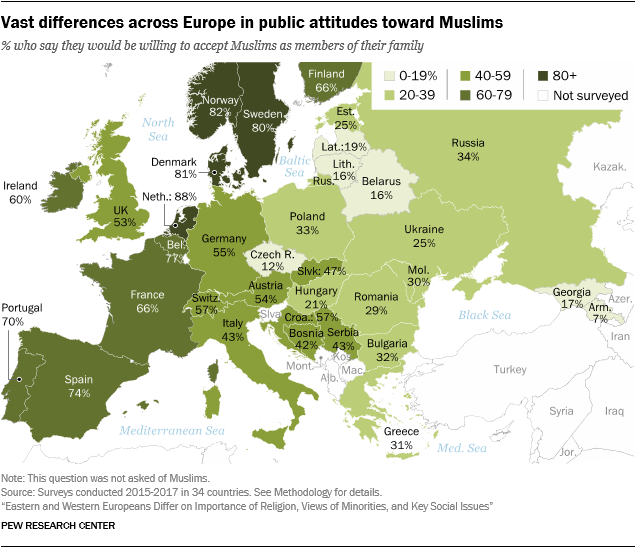 See also the complete report as 30 pages of PDF. The map above is striking, isn't it?

Non-Muslim citizens were asked the question whether they would be "willing" to accept a Muslim as a member of their family. This is a rather well-chosen question when it comes to "maximally extracting the underlying feelings" although the question cannot be interpreted literally. Parents may very well be totally against a new Muslim member of their family but their daughter is independent, has her independence backed by the law, and if she simply wants to marry a Muslim, she will probably be able to, anyway.

In Western Europe, you got some truly striking outcomes. In the Netherlands, 88% said "Yes". In Scandinavia, it was 80%-82%. Spain, France, Ireland, Finland were in the 60s and 70s, Croatia and 3 German-speaking countries in the mid 50s, Slovakia, Italy, Serbia, Bosnia in the 40s, then Russia, Poland, Greece, Bulgaria, Romania, Moldova around 30%, Ukraine, Estonia, Hungary in the mid-to-low 20s.

There's a lot of "random group think" that determines the answers – even though the nations may differ much less than the results indicate. It's politically correct in Czechia to agree with any statement that we should better shield ourselves from Islamization in all forms. In spite of that, Czechs happily elect Syria-born mayors for two decades, and purely anti-Islam candidates have almost no chance in any elections. Many Muslims in Czechia will tell you how they consider Czechs friendly.

Some of the the attitudes by the Armenians and Czechs are probably explained by the historical experience with imported religions.

You know, in 1915, the Armenian Genocide took place. 1.5 million Armenians, starting with their elites, were murdered. You know, Armenians were overwhelmingly Christian while the killers were almost entirely Turkish Muslims. So you just shouldn't expect Armenians to welcome a Muslim to their family, should you?

Czechs didn't have similar dramatic experiences so far, thank God even if we don't believe that He exists. But Czechia is one of the true cradles of mass Protestantism in the early 15th century – I mean the Hussites. Most of Czechs became "standard" Protestants of the Western European type when it was possible. Nevertheless, after the Thirty Years' Wars, the Austrian Catholic overlords were capable to re-Catholicize the nation, anyway. The process was basically successful, the 18th century saw Czechs as another Catholic nation again.

But at what cost? The costs were huge and the re-Catholicization was accompanied by the loss of our national power, self-confidence, and even a big drop of the Czech population. John Amos Comenius, the teacher of nations, has been forced to exile (the Dutch Republic). On top of that, we haven't forgotten about these things. So when we abandoned Catholicism and most other religions, we still knew that the religious changes imposed from abroad are almost guaranteed to be a very bad thing for the nation and its individual members' well-being and freedom.

Incidentally, this very report contains lots of data, including those about irreligion. Only one European nation had a majority answering a "pure none" to the question which God or religion they preferred. Our percentage was 72% – everyone else had below 50%. So much for the doubts about Czechs' being the most irreligious nation in Europe. This priority of Czechs is crystal-clear. No one else comes close.

Some people, especially in the U.S. (and I mean people on both sides of the political spectrum), love to mindlessly identify religion with the right-wing politics. But in Czechia, we have nothing of the sort. Religion is a tiny phenomenon – and the proudly religious people in politics are close to the political center and arguably lean to the left. The key people on the right are irreligious. So that religion-conservative link doesn't really work here and there's no good reason why it should.

Also, because the irreligion is being identified with left-wing politics and "welcoming of the Muslims" is an important feature of the contemporary left-wing politics, some people could expect the irreligious Czechs to be welcoming Muslims. But that's rubbish as well – and you should know it's rubbish. Most of us are really irreligious – and it's not a codeword for some extreme left-wing politics. Being irreligious obviously involves being skeptical of (or hostile towards) Islam, too, because Islam is said to be a religion. Well, Islam is also a religiously flavored political ideology – but Czechs are even more skeptical of those things. A big political power demanding the influence over every citizen and his behavior 24 hours a day and using religious justifications for that manipulation is what we really hate.

We actually accept most of the Christian values and traditions that have worked. Czechs just don't feel the urge to pray, attend masses, talk to God, and they wouldn't like some priests to become their rulers again. But this desire to be independent of the religious power and proclamations does not mean that Czechs instinctively stand on the opposite side than Christianity. They mostly stay on the same side – probably much more so than most of the "very Christian" nations. When we don't pray every day, it does not mean that we do all the things that Jesus Christ has labeled as bad! Jesus Christ would be our pal of a sort, He just wouldn't be able to exaggerate His divine credentials because We don't like it much. ;-)

I am sort of shocked by Slovakia's 47%. How did our brothers get these brutally different results? A four times higher percentage of Muslim welcomers than Czechia? It's striking. You can see that the idea of a single Czechoslovak nation clearly had its sharp limitations. We were never quite thinking as a single nation. In the long run, the proportion of left-wing and right-wing attitudes may be similar in Czechia and Slovakia. But our menstruation cycles weren't ever synced. Slovaks are more religious today and they have never been Protestants. Slovakia, perhaps a little bit like Slovenia, partly enjoys to be a good puppy that is thrown some Pedigree Pal from Brussels for its obedience. It's a bit puzzling – in 1990-1992, most Slovaks weren't terribly excited about the Pedigree Pal from Prague. But maybe Brussels sells Pedigree Pal of a better quality than Prague, who knows. The Czech Pedigree Pal probably contains a smaller percentage of real meat and they dislike it etc.

The huge differences in the attitudes to Islam – even when it comes to the simplest question of the type "Islam in Europe Yes or No" – seem very serious and a possible reason for a future big war. At this moment, the Islamic migration is modest again and the huge gaps in the European map are a bit Academic in its implications. But if Europe returns to the conditions in which millions or tens of millions of Muslims will be waiting right behind some European borders and tens of millions of Europeans will brutally differ in their opinion whether the doors should be opened and which doors, the conflict is almost bound to erupt. There are clearly nations that are dreaming about being Islamized (Geert Wilders must obviously have a hard time in his country!) – and nations that are absolutely terrified by it and find it more unacceptable than almost everything else.

It's such a fundamental yet simple social or political question and the differences are so obvious that it's likely to be the cause of the next big conflict in Europe.
Luboš Motl v 11:48 AM
Share