2019: the International Year of the Periodic Table

In a few hours, the first TRF readers – probably starting with those in New Zealand – will make the transition from 2018 to 2019 = 3*673. The United Nations General Assembly didn't have a better idea. So it declared the new year to be the International Year of the Mendeleev Periodic Table. 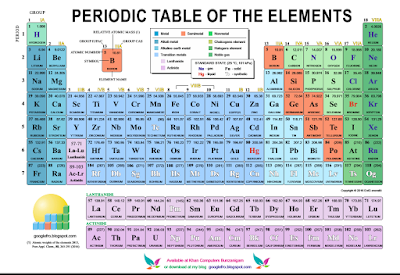 It's surely a better pick than a year celebrating e.g. invaders and terrorists who are flooding and decomposing Western Europe. Here you have the Czech verses that helped me memorize the periodic table.

The year 2019 is a good choice for such a "chemical" year because on March 6th, 1869, i.e. exactly 150 years ago, Dmitri Mendeleev made the formal presentation to the Russian Chemical Society.

Mendeleev has claimed that the periodic table has emerged in front of his eyes in a dream, while he was sleeping. That sounds truly romantic. Unless he was lying, he only needed to adjust one mistake in that dream he had.

Before 1869 and even before that dream, there was some prehistory. In 1867, he noticed the following pattern in the atomic masses of the similar elements:

The three rows clump elements with similar properties to 3 families. If you sort the atomic masses of these 9 elements, they fit into the families 1,2,3,1,2,3,1,2,3. So qualitatively speaking, there is a periodic pattern here. OK, Mendeleev summarized his observations as 8 principles – the properties of the elements, including the valence (the combining power), seem to be periodic functions of the atomic mass. Discoveries of new elements should be expected, and so on.

Quantum mechanics has made these findings "obvious". It has allowed us to calculate lots of things – rather precise chemical properties of each element and the molecules, too.

I remember that as a high school kid, before I understood quantum mechanics, I had trouble to believe all the statements we were fed in the chemistry classes. Why should electrons sit in shells, as if they were realizing some combinatorial tasks? Electrons were particles so they should better move along some trajectories etc. Only when I started to "get" quantum mechanics at the age of 17 or so, it started to make sense.

The organization of elements is a fun approximate calculation in quantum mechanics.

The hydrogen atom may be solved exactly, e.g. by the \(SO(4)\) symmetry. Electrons in the attractive \(1/r\) potential (Kepler or Coulomb problem) sit in \(E\lt 0\) energy eigenstates with the eigenvalues \[

This hydrogen solution is relevant for the ions with 1 electron, too. The energies just get rescaled by \(Z^2\) – \(Z\) from the higher nucleus' charge affecting the potential energy, another \(Z\) from the smaller \(r\) by a factor of \(Z\) which is also caused by the stronger attraction.

If you study atoms, you need to place many electrons. The simplest way to use the hydrogen result is to first neglect the mutual repulsion between the electrons. If you do so, you deal with electrons in the hydrogen problem. They may be second-quantized and created by the Fermi creation operators to the hydrogen energy eigenstates, so that the occupation numbers are 0 or 1.

This answer remains largely correct qualitatively but the "effective" energy shells that you are filling with the electrons are a bit rearranged due to the electrons' repulsive interactions. So you would have


if this were a real second-quantized hydrogen problem. But because the electrons' repulsion modifies the energies a bit, the 4s shell gets actually filled before 3d and there are many modifications later.

Some two years later, I could understand where all the Hund's rules came from. To know all these bizarre rules without the explanation was provoking for me, to say the least. I think that lots of schoolkids just memorized any rubbish they are fed – most kids today don't do it today and they would claim to be tortured if someone wanted them to learn any hard facts. (Many of us kids wanted this pressure to be considered torture already in the 1980s, we were ahead of time LOL!)

On one hand, I am inclined to say that kids shouldn't be taught the data – such as Hund's rules – that they cannot "prove" for themselves, and therefore they cannot "rationally believe" them. On the other hand, these rules are still true and useful and lots of kids are just good at learning things whose proofs are completely incomprehensible to them.

And even kids like your humble correspondent who simply want to understand the proofs of everything they believe may find these "unjustified claims" rather helpful. Maybe many of us decide "not to believe" Hund's rules for a while. But if we pay attention to that problem, we finally realize that there's quite some evidence that the rules are actually correct, at least the empirical evidence that is independent of the textbooks and teachers. And they must struggle with the consequences. First of all, we're forced to realize that our disbelief doesn't automatically mean that the statement is false. Second of all, we're led to fix our mistake – and to actually understand or re-discover the proof.

If I had to choose what excites me more, atomic physics or nuclear physics, I would probably pick atomic physics – despite its operating at a lower energy scale. Nuclear physics is a "higher energy physics" in comparison but it's still far enough from the truly fundamental scale. And the difficulty seems to have no depth or philosophical purpose. So from the viewpoint of the energies, it's almost a draw from my perspective. But atomic physics is much more controllable theoretically which is an advantage.

This is a preference related to people's personalities. I think that there are people who prefer the messier nuclear physics just for the sake of the messiness.

Thanks, gospodin Mendeleev, for the wonderful table and the ideas that were so important for the evolution of the 20th century physics, too.
Luboš Motl v 12:09 PM
Share