Global warming left when the Midwest needed it most

Czechia is enjoying a standard winter, with lots of snow in the mountains and temperatures a degree or two below the normal January temperatures (daily average is some –1 °C in Czechia and we may have –2 °C or –3 °C these days) – exactly the kind of an old-fashioned winter that was promised not to happen anymore.

Meanwhile, the American Midwest is freezing. You can't survive in your swimming suit for an hour outside. The U.S. president has excited everyone by this obvious tweet:

In the beautiful Midwest, windchill temperatures are reaching minus 60 degrees, the coldest ever recorded. In coming days, expected to get even colder. People can’t last outside even for minutes. What the hell is going on with Global Waming? Please come back fast, we need you!

Let me assume that he typed it with his own little hands – something that the Czech prime minister would never be capable of doing. Andrej Babiš has never successfully touched a computer, not even now when he proudly met Bill Gates, Tim Cook, and the boss of Huawei. ;-)

It's just amazing when this 19th century-style Bolshevik nurtures his image as the man of the future who is connected with the technological elite of the 21st century.

But let's return to the Donald. Instead of "covfefe" and "hamberder", the readers could see "waming" without "r". So exciting. I often post tweets that have such typos because the tweet is not supposed to be a repeatedly proofread artistic work that will be celebrated for millenniums. It's a piece of digital junk that just gets mixed in the noise for a while.

Most of the typos (at least serious ones) in the blog posts are caught by Bill Z. whose sensitivity for details is amazing. ;-)

However, you may see that there are hundreds of inkspillers who get extra thousands of dollars of income for having written a sentence about Donald Trump's misspelling of the word "warming" in a damn tweet. Just search for "waming" on Google, using the filter for recent 24 hours. When you're the U.S. president, such an innocent typo literally changes human lives! ;-)

Lots of religious climate alarmists are terrified that the cold weather – which may break all-time records at numerous places tomorrow – is mentioned at all. It's a heresy. Everyone should worship global warming!

Meanwhile, as Chicago expects –31 °C tomorrow and some places will stand at –50 °C, the newer subsect of the global warming cult, the extreme climate change cult, is saying that the global warming is compatible with this chilly weather. [Yes, a silly mistake in the previous sentence was caught by... Bill Z.] Why? Because the evil mankind has really caused climate change which may mean anything – and one thing that it means is the polar vortex that caused the ongoing chilly weather in the Midwest.

In the Soviet cartoon, it was always Wilczek who was trying to catch Zajc. Why shouldn't sometimes Zajc catch something, e.g. all my mistakes, errors, and typos? :-)

The polar vortex is some distortion of the shape of the warm and cold regions and winds and their boundary that makes the Arctic "reach" to zones that expect to be warmer. It's great but you can't really get a polar vortex without some wind from the North – cold Arctic wind that actually brings the boundary and the whole chilly air mass to Chicago, and does so sufficiently quickly so that the air doesn't get heated up much during the journey.

If you think just for a little while, you will immediately conclude that such episodes of very cold weather have always taken place (you remember some of those decades ago, to say the least) – and when they were extreme enough, they were always caused by a polar vortex. The polar vortex doesn't depend on the human activity or the modern era at all. Half a century ago, journalists didn't write "polar vortex" during every cold spell but it was a polar vortex, too.

Because the poles are warming a bit faster, the temperature difference between the warmest zones and the Arctic has shrunk a bit in the recent century – perhaps by a degree Celsius which means by a few percent (from 40 °C to 39 °C, to invent some numbers – but the precise numbers depend on the exact question). This smaller difference implies that there's less clear "stratification" or separation of the different latitudes. So the polar vortex may be more frequent, indeed. But it's also less intense because, you know, the Arctic which sends this chilly air is less chilly than in the past – because this is basically the Earth's region where the global warming was fastest! 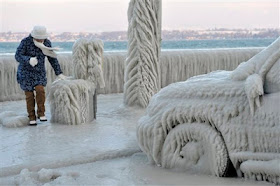 When you quantify such things, you will realize that the frequencies of well-defined cold spells and the temperatures of the worst ones may change at most by a few percent or a few tenths of a degree – the two opposite effects above largely cancel – so there is really no change that anyone could detect. On top of that, if you measure the variability by some uniform measure involving "integrated squares", it is rather clear that global warming has made this variability (and therefore extremes) a bit smaller, after all – because the temperature on Earth got a bit more uniform and the non-uniformities of the temperature on Earth is more or less the source of the temporal variability of temperatures at each place, too (because the temporal temperature variability at a fixed place is largely "feeling" the spatial variability elsewhere due to the changing direction of the wind).

On one hand, you could say: It's nice that the journalists talk about the "polar vortex". The public may learn some atmospheric physics from the newspapers, isn't it great? On the other hand, the actual main purpose of this term, "polar vortex", is for the journalists to sound credible and convey a thesis about the climate that is absolutely idiotic. Cold spells like that didn't exist before 1776 or some year like that! They're caused by SUVs or coal power plants!

Sorry, the latter statement is a sign of the speaker's absolute scientific illiteracy – and it's way more harmful and stupid than the notion of "polar vortex" is useful and intelligent. At the end, rather normal people have always used the phrase "Arctic air" or terms involving "North" to describe the sudden arrival of very cold weather. They may use "polar vortex" now – which is somewhat more complete in its description of the shape of the masses of cold air (just to be sure, not "every" cold day is due to a "polar vortex").

But the increase of accuracy or knowledge from the "Arctic air" to the "polar vortex" is much smaller than the decrease of people's scientific literacy when they unlearn that the weather was always changing approximately equally – and instead start to believe that the weather was free of extremes a few century ago. That is a fundamental misunderstanding of science which is much worse than the ignorance of the term "polar vortex". "Polar vortex" is superficially being written in the newspapers to increase the readers' understanding of the air masses – but in practice, the main lesson that they're supposed to learn is the nonsensical thesis that "polar vortices" are man-made!

You know, the leftists used to agree with such things. They were mocking Christians for believing that the world wasn't there 6,000 years ago, that there was the Big Flood, Creation, and other wonderful Biblical events. Everyone should know about the longevity of the Earth. Cosmology, astrophysics, geology, archaeology, and genetics have all determined that the world around us – and even most of the important objects and processes – are billions or at least "many millions" years old.

To believe that something major didn't exist thousands or hundreds of years ago – mammals, trees, stars, mountains, seasons, days and nights, sexes, competition, races, rainbows, cold spells, earthquakes, anything like that – means to be a hopeless, scientifically illiterate imbecile. And this is what the deceitful media are trying to gradually make out of millions of readers and viewers – while they're pretending that they're making them smarter by occasionally using some scientific jargon.

Sorry, science isn't about the jargon. Science is about the content, especially the most essential insights. The fact that nothing fundamental has changed about Nature or weather in recent centuries is a cornerstone of the scientific world view and inkspillers and demagogues who are eroding this understanding of the world among the readers need to be punished.

An American babe learned to play (great!) and sing (unexpectedly good!) the song "Ladovská zima" ([Early 20th century painter or cartoonist] Mr Lada's Winter" by songmaker Mr Jaromír Nohavica who recently got the Pushkin Medal from Putin, an event that divided the Czech public, as you can imagine. In the song (TRF), romantic segments alternate with the segments where Nohavica is really pißed off by the white mess, afraid to go to supermarkets covered by thick layers of snow, children are only sledding because it's their duty now etc. Like every year, Winter Highway Maintenance guys are surprised a lot that the snow covered their roads (it rhymes in Czech; this is so current in 2019 again LOL).

Totally off-topic: I played a dozen of songs by Nohavica, fun. It's interesting to see how the societal atmosphere is evolving. For example, Nohavica wrote Mr President in 1997. The lyrics is a fictitious letter by a pensioner to President Havel. The pensioner complains that his kids forgot him, everything sucks, everything is getting expensive. The pensioner believes that the president will fix everything. The video I linked to was created in 2008, i.e. 11 years later. The president was Klaus, a very different person, and the video is clearly meant as a parody. But even Nohavica's original song was rather far from the worshiping of Havel. Nohavica was actually dissatisfied that during the 1997 floods, Havel failed to "even soak his pants into the Moravian waters". OK, the 2008 video makes Klaus look like an arrogant man who doesn't care about any people. Now it's 11 more years later, the current president Zeman is in a much worse and less active shape and PM Babiš, the de facto main leader of Czechia, is only doing some mundane everyday and populist moves without any historical significance – and work needed for him to avoid jail – while he markets himself as the most important man of history. Disappointing evolution.
Luboš Motl v 6:48 AM
Share