Only in recent days, I learned some facts and I was amazed how many buildings that I have known so well were designed by Eng Arch Hanuš Zápal (1885-1964), often considered the most important regional architect of the Pilsner Region of the last 100 years. He was born in a village North of Pilsen, Krašovice, which has just 370 inhabitants. To make it confusing, while also located in the "Pilsen North District", Krašovice is rather far from Krašov, a place with the most powerful communications tower in the region, and another Krašov, a castle on the Berounka River.

OK, this is the Luděk Pik Gymnasium, a high school I used to attend (and mostly dislike). It was built between 1930 and 1932 according to Zápal's plans – and (after the fall of communism) named after Luděk Pik who was the most important social democrat in the region and led the city as the mayor between 1919 and 1938, for quite some time.

On the picture, you may see that the building looks fresh, white, modern, and free. Now it's painted orange which looks uglier and it is surrounded by lots of buildings, especially those on the massive road, the Masaryk Avenue.

While almost no one knows the name of Hanuš Zápal, every person from Pilsen knows lots of buildings he had designed such as The Skyscraper

at the American Avenue, our "Wenceslaus Square". Yankee readers may appreciate how impressively Western name this avenue has been given; up to 1989, it was called the Moscow Avenue. ;-) The building isn't scraping the skies as brutally as its namesakes in the New York City but I guess that in Czechoslovakia of the early 1920s, such buildings were among the taller ones.

But Zápal has designed lots of well-known huge schools, hospitals, new churches, crematoriums, and so on, see e.g. this SWEB page, his Wikipedia page, or his list at Pam.Plzne.cz (in English).

OK, so far, these buildings had very little to do with me. Zápal was a top architect of the First Republic and one of the guys who have been mostly forgotten. 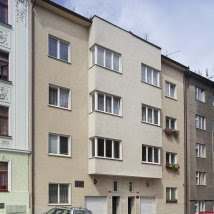 You may look at Seznam.cz maps to understand that the apartment buildings Křížkova 1 (I took that picture) and 3 are older – I've seen the romantic photographs of those houses from 1900 or so. Křížkova 5-7 is a semi-detached building from 1938-1939. (Incidentally, there's a plate saying that Cardinal Beran – the Czech catholic boss who oversaw the communist coup – lived in Křížkova 1 between 1904 and 1930, a fact I ignored as a kid but now I find it sort of fascinating.) And Zápal himself moved to... Křížkova 5 (the left half of the building on the photograph I embedded) from the adjacent Malická Street (which I also knew extremely well).

As you may guess, my postal address used to be... Křížkova 5. If you cared, Křížkova is Littlecross', named after a Mr Littlecross, and Malická is the Malician Street, named after the 10th century village of Malice (The Littlevilles) that used to be there.

The apartments were huge, sort of luxurious. And after 1989, they were offered for privatization for... CSK 1.1 million. I believe it was the price for both parts of the Křížkova 5-7 semi-detached house. We had some "pre-purchase" rights. I was sure that this would be an incredibly good buy and wanted some relatives to cooperate with me but no one did. The value is almost certainly above CZK 20 million now, probably significantly more than that. Some neighbors from Křížkova 7 bought it instead.

Throughout the Protectorate and for many years after the war ended, the rent for the large fancy apartments was just CSK 103, quite a nice number. I can't believe it was so cheap. The average salary was CSK 500-1000 during the wartime and before/after that. For a small fraction of the average salary, people could afford such a fancy apartment. Fancy accommodation has gotten more expensive in the last 80 years, even as a fraction of the salary – despite the growing GDP.

I guess that my maternal grandfather, an achieved regional painter František Koliha, had some special rights (or money) to get there soon after 1939. The rent of CSK 103 looks particularly unbelievable if I realize that we found a bankbook of my uncle (now in Australia), with savings paid by my grandfather, where the savings grew from a tiny amount in 1939 (when my uncle was born) to the high of CSK 80,000 or so around 1945. In 1948-1953, this whole money was stolen by the communists (except for a few percent). They stole damn 800 months of a rent in the fancy almost 100-squared-meter apartment. And this is just some savings for a kid. I am sure that my grandfather was robbed of much more money than that. You should understand that there's also something personal about my hatred for the left-wing people. The left-wing scum has been harming me even decades before I was born. Needless to say, the communists not only robbed my grandfather – a guy with clear pro-Western links (who spent many years of the 1930s in France) but they also largely prevented him from doing his work (as a painter). He had to become extremely thrifty and people remember him arguing about the value of 5 eggs etc.

Not to create a false impression, my paternal side ancestry is pretty much working-class – another side of my identity that I sometimes identify with.

Communism didn't want top architects or painters or better people and their buildings to be visible or to thrive, either. So it is no coincidence that only at the end of 2018, I learned that my childhood's postal address coincided with that of the most important regional architect. It's funny to remember the tenants in that building as of 25 years ago. The small apartment at the bottom of Křížkova 5, next to Zápal's garage, was occupied by Ms Anna Rumlová, my first and beloved teacher at the elementary school – who had accidentally taught my mother 25 years earlier, too.

I met her two years ago. Because she was born in 1917, on January 1st, she was going to celebrate her 100th birthday. Her name is no longer written there. I can't find out whether she is alive or what's happening with her. Update: I found a page where a local politician wishes her best, but I found it was after her 99th birthday, in February 2016, so it is not safe she made it to 100.

OK, next floor, Ms Brandtová. An ordinary pensioner of a sort (perhaps completely accidentally, she moved to an entirely different place of Pilsen, a concrete block where my paternal grandmother used to live!). If I understand well, hers was the apartment where Zápal lived himself! With all my respects to Ms Brandtová, I still find it crazy. How does it happen that someone like Ms Brandtová gets the apartment that used to belong to the architect of that building, the top regional architect, and where he lived himself? Go one floor further: Mr František Hykeš. He was the editor-in-chief of the main communist newspapers in Pilsen, Pravda. OK, I can at least understand why Hykeš could have gotten one of those flats. After the fall of communism, he reinvented himself as a guy who understood the combination of words and animals (he began as a journalist who covered animals) and he became the spokesman of the Pilsner Zoo.

One floor higher, the highest one with the full-blown windows. That's where my mother and I lived. Here, I can understand it as well – she wasn't a VIP but her father, the painter Koliha, was one. (A similar explanation may exist for Ms Brandtová, of course.) OK, there was one more smaller apartment at the attic. These findings made me even more curious: How did the other people get there? What about the second part of the building, Křížkova 7?

With its absolutely pathological, egalitarian ambitions, the communism regime has completely messed up the real estate market – much like all other markets – and erased the differences between VIPs and non-VIPs. Well, in many cases, it has not only erased them. It has deliberately reversed them. All parts of the economy unavoidably suffered because of that. And most of the creative architects were replaced with makers of ugly concrete blocks which have had no personality.
Luboš Motl v 8:30 AM
Share