CMS: a 3.5-sigma excess in CP-odd Higgs to tops decays

The CMS collaboration has apparently resumed its mass production of deviations from the Standard Model. After the hints of a gluino in gauge-mediated supersymmetry breaking, we have a new anomaly:

A hypothetical new Higgs boson – which is searched between \(400\GeV\) and \(700\GeV\) and for various small values of \(\tan\beta\) – is assumed to decay to top quarks which decay further. The maximum deviation occurs near the lightest edge of the possible mass, around \(m_A=400\GeV\) for the mass of the CP-odd Higgs boson \(A\).

The situation is most clearly summarized by the last figure: 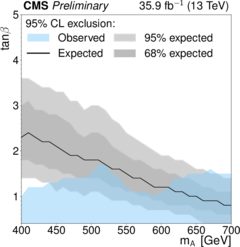 The black line is the expected exclusion limit – everything below this line should have been excluded. The two grey strips indicate the 68% and 95% bands, understood as a percentage of models for the given values of \(m_A,\tan\beta\) that are excluded.

The blue region is the actual excluded part of the parameter space. You may see that much less is excluded than expected, especially on the left side. As I said, the excess is as high as 3.5 sigma on the left boundary of the diagram. It was expected that everything below \(\tan\beta\lt 2.3\) would be excluded but only \(\tan\beta\lt 1\) was excluded.

It's all great and they have even taken some interference with top quark pairs into account. However, the possible and rather strong excess has one big disadvantage. It might be an artifact of the leading order (LO) approximation chosen for the MADGRAPH5_AMC@NLO calculations.

That lousy approximation might matter because higher-order processes could predict significantly higher cross sections for the top pair quark production near the threshold. And because the minimum mass of a top quark pair is some \(350\GeV\) or so, \(400\GeV\) is near the threshold, indeed. After all, these risks near the "top quark pair threshold" are the likely reason why they didn't try to look at lower values of the CP-odd Higgs mass.

That's why this excess, despite its being signal-like, could be more likely to be explained by some neglected Standard Model processes than other, smaller excesses I discussed recently. But it's still signal-like which is why there exist good reasons to think that it could be a sign of a new Higgs boson, too.

That excess could be due to the same new physics as this similar L200 signal region of ATLAS in a similar search (3rd line from the bottom on that page).

An isolated 1.9-sigma excess is also found in a bin on Figure 2b in a different paper.

Some huge, over 5 sigma, discrepancies were found for the \(J/\psi\) physics but I don't understand it well and it seems too messy, not a reason for new physics.
Luboš Motl v 7:12 AM
Share