The third hep-th paper in today's listings is very interesting.


First of all, the authors are nice because they are deniers. One of them is a Koch brother, Robert, and the other one is David Berenstein, the long-haired guy who sings "I'm a Denier" along with Al Gore, Michael Mann, and Chicken Little. ;-)

OK, more seriously, they study matrix models which are clearly relevant for full-blown definitions of quantum gravity. Lots of descriptions of vacua (or superselection sectors) of quantum gravity are given by \(U(N)\) or \(SU(N)\) gauge theories in various numbers of dimensions – that includes the \(AdS_5\)-like vacua in AdS/CFT and the BFSS matrix theory.

Some half-supersymmetric subsets of operators in such theories are fully understood etc.

A non-supersymmetric case of a matrix model is the "old matrix model", just a Hamiltonian with a natural kinetic and potential term written for bosonic degrees of freedom arranged in a Hermitian matrix. One may cleverly solve it, see that the eigenvalues of the matrix effectively behave as particles, and those particles happen to be fermions. That treatment may be shown to be dual to the Liouville theory etc.

Koch and Berenstein study the seemingly simpler, fermionic version of that matrix model,\[

\] A very simple theory of a massive fermion in 0+1 dimensions extended to a whole matrix of fermions. The solution of this problem for any \(N\) must be sort of analogous to the bosonic case with eigenvalues.

Koch and Berenstein show that these two bases are actually exactly the same, up to the normalization of each basis vector. The translation is done by hooks in the Young diagrams. A hook is an (upside-down-inverted) L-shaped sequence of boxes. You may divide every diagram to hooks, starting from the left upper corner, see e.g. this hooky Wikipedia page. 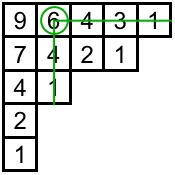 It's surprising that the identities to show that the basis vectors are the same, up to a normalization, are said to be newly discovered. So the single fermionic matrix model simplifies.

For years, I have thought that the proper mastery of many such matrix models, their operators in assorted regimes, and their clever generalizations is important for a complete understanding of a theory of everything – or the most universal possible description of string/M-theory or quantum gravity. Note that the word Schur appears in 7 TRF blog posts so far, if I include this one. In some of them, I tried to make the Schur bases relevant for the ER-EPR correspondence.

There's another hypothetical (my) connection to quantum gravity that needs to be refined. Note that Vafa et al. wrote about quantum Calabi-Yaus and classical crystals or quantum foam where the partition sum may be written as a sum over generalized, 3D "Young diagrams" labeling topologies of Calabi-Yau three-folds. I believe that there is some generalization involving the two-complex-dimensional topologies and matrix models of the Koch-Berenstein style are dual to a theory in a two-complex-dimensional world volume – a generalized definition of a world sheet.
Luboš Motl v 7:21 AM
Share