Thanks, CO2: the resilience of plants to drought is amazing

Since the beginning of the Industrial Revolution, the CO2 concentration has grown from 280 ppm to 410 ppm or so (ppm is a part per million, of volume, or equivalently, 0.0001% of the number of atoms/molecules in the atmosphere), i.e. by 45 percent. CO2 is primarily good as plant food – most of the mass of trees and other plants is made out of water plus carbon that is extracted from CO2 in the air. 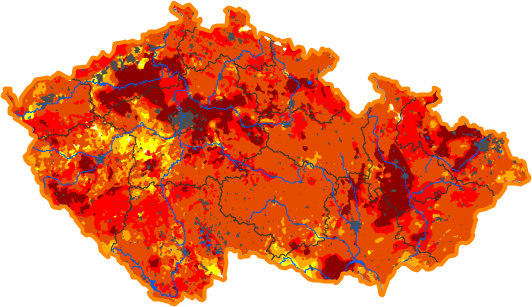 So it's not shocking that agricultural yields have grown by 20% or so just because of the higher CO2 itself. The food is more easily available so plants grow more easily. But the microscopic explanation why plants are doing better also involves water. Because CO2 is more available, plants may afford fewer pores – the holes through which they absorb CO2 from the air – and this is good because the fewer pores also mean a smaller loss of water.

Clearly, many researchers have studied these matters and there are lots of additional details to be said, like variations of these statements for different classes of plants etc. For the basics, see e.g.


Rising carbon dioxide is causing plants to have fewer pores, releasing less water to the atmosphere (Indiana Univ. 2011)
Study: plants do better during drought thanks to increased CO2 levels (WUWT about an Irvine paper, 2016)


The first paper mentions that the density of pores has dropped some 34%.

Because the pores are so important for the loss of water, it is reasonable to say that the "water that is being lost and needs to be refilled" may be 1.5 times less available than before and the plants will do equally well as they would do in a CO2-poor but wetter environment.

I think that these days, we're seeing the effect of the plants' resilience quite explicitly in Czechia. A year ago, there was a hysteria about the nearly historic drought. During the year, the harvest was at least as good as an average one, most of the crops were above the average. Tomatoes did poorly. By the end of 2018, the drought suddenly disappeared, proving that the panic was unjustified and I had been right.

Now, the maps at Intersucho.cz show amazingly dry conditions. Most of Czechia – it's even worse in Hungary but significantly better in Slovakia and just fine in Romania, Yugoslavia, Belarus, and much of Europe – is at orange S3, namely significant drought, with large enough islands of the red and crimson, S4 and S5, i.e. extraordinary and extreme drought. Just 3 weeks ago, the map was overwhelmingly white or very light yellow with minority reddish islands. However, one can notice something by observing the real world: the grass and trees are amazingly green, flowers and blooming plants are amazingly red, blue, or whatever they should be.

All the plants are doing fine. They don't complain. Despite the 200 meters times 600 meters forest fire in Pilsen yesterday – firemen stopped it quickly enough, helicopters helped. We expect at least some rain on Friday so the map of Czechia could get less orange next Sunday.

But my main point is that we have really gotten used to this amazing help from the higher CO2 levels. When CO2 starts to drop, and it will start to drop quickly (perhaps by 4 ppm a year) once people significantly reduce the consumption of fossil fuels, the mankind may face some really difficult food shortages etc. According to water only, 2018 could have easily been comparable to 1947, a legendary dry year in the Czechoslovak history. On that year, Stalin sent us lots of corn. Also, he told us to forget about joining the Marshall Plan – those were the "international trade" events that contributed to the communist coup in 1948.

But the year 1947 was bad enough. People in the West got used to the excess of food. We forgot what hunger is. Much of it is due to the technological progress in agriculture, genetic engineering etc. But some of it – perhaps a comparable increase – is due to the higher CO2 concentrations. If CO2 catastrophically dropped, e.g. below 350 ppm, the people could see very bad harvests again. Visually, the culprit would seem to be drought in most cases. But the real culprit would be the higher vulnerability of plants towards drought in a CO2-starving atmosphere.

I believe that this problem may be delayed by a lot. There's enough coal. People should keep on burning coal – even if it were just for keeping CO2 – and prevent the CO2 concentration from dropping by more than 1 ppm a year. At that rate, the mankind could hopefully adapt to lower CO2 levels again. I think that these aren't problems that any of our generations will face – I think that the CO2 concentration will continue to rise at a healthy rate for a century or more – but the "peak CO2" moment (perhaps with the peak CO2 level around 600 ppm only) will arrive at some point and it will be a dangerous point for the mankind, indeed.

If the fast drop of CO2 becomes unavoidable, I guess that people will have to grow almost everything in some kind of greenhouses, under a roof that mechanically prevents H2O and CO2 from escaping. Could we afford such glass or plastic covers of our fields today?


Incidentally, the weather was sunny and summer-like during Easter – a great source of psychological energy. If you can simply catch some suntan etc. At least temporarily, I decided that I primarily wanted to survive!

So the English speakers could pick I get knocked down but I get up again as the right motivational song. It's great but I combined it with Peter Nagy's (Slovak) "Sing/love/live as if it were the last time" from the 1980s.
Luboš Motl v 7:38 AM
Share