Farmelo speaks like an excellent host – the framing, background music, and intonation seem professional for someone who is mostly known as a writer. OK, Witten was relaxed and said he was interested in astronomy as a kid. Many kids were – there were astronauts and other things at that time. Witten mastered calculus at the age of ten or eleven (depending on the type IIA coupling constant – and yes, he is an M-theory guy with a high coupling LOL), it's a bit later than your humble correspondent, but OK. He couldn't quite hide that his mathematician father had something to do with this mathematical exposure. 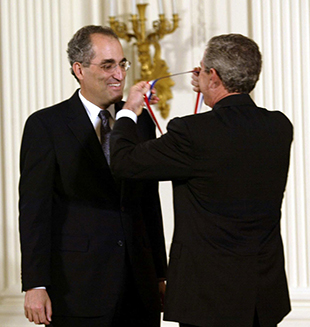 He was interested in other things, worked on a failed Democrat Party candidate's presidential campaign (the victorious president above brought more smile to both men!), and realized physics was his cup of tea after the age of 20.

I was a bit surprised to hear that his first professional-level exposure was to physics, not mathematics. Intuitively, Witten just looks like a man whose formative years were shaped by mathematics, not physics, but it's apparently an illusion. He was only dragged to deep mathematical aspects and mathematicians' mathematics later.

(OK, I verified with Wikipedia and I insist that I am not completely wrong. After an economics graduate school, Witten joined as an applied mathematics graduate student, and switched to physics only later, earning PhD under Gross in 1976. Applied mathematics grad school, father-mathematician... I just don't buy it's completely wrong to say that Witten the kid hasn't been shaped as a mathematician.)

Witten talked about the fast pace of experimental discoveries a few decades ago. When he became a graduate student, the pace slowed down considerably. So I guess he rationally figured out that he had to work more theoretically to optimize the output.

Witten mentioned some interactions with Steven Weinberg – who had some fun while explaining current algebras to the current algebra infidels that included Witten. Sidney Coleman was important for Witten – the only guy who was really interested in strongly coupled QFTs (and instantons etc.). OK, Witten was probably the second guy. Michael Atiyah, Saša Polyakov, and Albert Schwartz are mentioned in connection with Witten's interest in instantons. (Georgi and Glashow are mentioned as weak-scale phenomenologists.)

That's where Witten probably got his mathematical edge – he learned sheaf cohomology groups and stuff like that. "Sheaf cohomology group" sounds like more hardcore mathematics than your favorite hardcore server but for Witten, it was apparently a matter of "learning about the physical topic of instantons just a bit more deeply than the average physicist". Index theorems got to the game, Witten did some influential mathematics work there. Some Polyakov's instanton program hasn't worked for physics as expected but it turned out interesting in other, more mathematical contexts.

Witten finally learned some Morse Theory while in swimming pool in Aspen, Colorado. Again, Witten does his best to deny he had any sort of mathematician's thinking. He was like other physicists who heard "Morse Theory" (or what it's good for) for the first time etc. He crisply explains the theory – as counting of the maxima, minima, and saddle points whose combination is determined by a topological invariant of the domain.

Some basics of string theory and the 1984 First Superstring Revolution are discussed. The anomaly cancellation needed some mathematics that was known to mathematicians (and to a limited extent, to Penrose and perhaps a few others) but not to physics graduate students. String theory has obviously made difficult mathematics more important.

The harmony between mathematics and physics is a "fact of life". He doesn't know what an "explanation of this harmony" would sound like, and neither do I. ;-) The very distinction between mathematics and physics depends on some slightly contrived definitions which introduce a conceptual boundary – and the relationship between them really means that you may remove the boundary that you just artificially added. What a big deal. ;-)

At 17:00, Farmelo uses the term "string framework". For years, the classification as "framework" has actually been favored over "theory" by some people such as David Gross. The string framework is an "alternative" to the quantum field theory framework. Nice but there is still a difference: the QFT framework is composed of many theories/models while string theory really is a single theory. So the two "frameworks" aren't analogous in most key respects.

Like your humble correspondent, Witten says that string/M-theory is the only interesting direction to go beyond the well-established framework of quantum field theory. A year ago or two, an article in The Quanta Magazine forced Witten to recant and an anti-string activist was able to force a deceitful edit of Witten's phrase to say that "string theory is one among many". But "it is revolving, anyway", Witten somewhat bravely reiterated, and string theory is indeed the only game in town in the absence of activists in the IAS dining hall or on the sofa in Witten's office (he was sitting at the point (0,0,0,0)).

So Witten got some small positive points for bravery on this point. But if it remains in isolation, and if he's not facing those who find "it's the only game in town" politically incorrect, the points are really small. You have to try harder, Prof Witten, to get rid of the relatively cowardly image. OK, here he corrected Farmelo's statement about "other routes". "There aren't any other routes," Witten has informed Farmelo. And "loop quantum gravity"? It's just words. Exactly. String theory is the only interesting way to go forward. Loop quantum gravity is a triplet of words used for some spin networks – and these spin networks have rather clearly nothing to do with quantum or any gravity which is why the triplet of words is misleading.

(Similarly, "asymptotically safe gravity" are just words. They could mean something but they surely don't mean a theory – not even a sketch of a theory – that has some well-defined rules and that has, according to some available evidence, a significant potential to solve some actual problems counted as "quantum gravity". The phrase "asymptotically safe gravity" represent some scale-invariant local QFT that is gravitational at the same moment. Because of holography and the black hole spectrum etc., it's unlikely that quantum gravity could be equivalent to a local or even scale-invariant quantum field theory in the bulk spacetime. I am pretty sure that Witten agrees with all these claims of mine about all the "alleged alternatives" to string theory.)

Concerning the absence of post-Higgs LHC discoveries, Witten recalls the widespread belief that the Higgs physics would have come together with new physics that fixes the Higgs scale – as a very low scale in comparison with the Planck scale. The absence is "extremely shocking" to him. Well, I would surely use less dramatic words – the fine-tuning may still be 1-in-100 and I don't find events with a 1% probability "extremely shocking". For him, a huge surprise was also the positive (but tiny) cosmological constant. Witten used to feel a big discomfort with the landscape or multiverse but he is less upset about the multiverse now than a decade ago – the Universe's purpose is not to make him feel comfortable. Well said. When the daily wars about the multiverse are over, I totally calmly accept this general picture as a clear possibility.

Some down-to-Earth questions may be solved in physics of the near future. The biggest new ideas may be completely unknown to everybody now. Among the known routes, the entanglement-geometry (spun as "it from bit") link seems most interesting to him now. Sensible in all counts. So the next upheaval could come from the entanglement-glue duality. Witten, usually too shy to forecast visions for the future (perhaps after some wrong predictions), regained some (totally reasonable amount of) composure and argued that his closet prophetic bones could have predicted such upheavals "a few years in advance" two or three decades ago – not bad. ;-) He should allow his prophetic bones to speak a little bit more often.

Witten says that people with various opposing opinions about "new physics" were all a little bit wrong. Expectations of lots of new (experimentally found) physics were wrong but so were the ideas that it would mean that the progress would stop. The progress since his graduate school was cool enough – and it has enriched mathematics, condensed matter physics, and more.

Farmelo praised Witten for the precision of speech and avoidance of philosophically sounding verbal gibberish. At the end, aside from promotion of his books, Farmelo admits that a purpose of that interview was to fight against the myth that Witten is a mathematician self-framed as a physicist. I surely believe in this myth less than the actual believers (Witten is an amazing physicist – and a universal top phenomenologist, he learned much of SUSY phenomenology from Gordon Kane etc.) but I still believe it's somewhat true and the interview hasn't substantially reduced this partial belief of mine, sorry. ;-)

Totally off-topic. I had wanted to embed this animated history of Czechia's map (with Smetana's Vyšehrad/Upper_Castle, a part of My Country) sometime in 2019 – and it's 2019 now.

If you find the years 1019-1041, you will see that Czechia's shape was almost identical to the Czech Republic as of today. In 1019, although it could have been 1029 as well and no one is sure, Duke Oldřich of Bohemia finally conquered Moravia, the Eastern 40% of Czechia that was organized as a margravate-not-kingdom throughout the feudal history.

So within miles on all sides, Czechia has had the same shape for 1,000 years in this year. The territory firmly controlled by Prague has been larger at some moments and we used to have access both to the Baltic and Adriatic Sea – but it used to be smaller, too, like nothing LOL. We're probably the world's most territorially stable country of the last 1,000 years now, congratulations to us.
Luboš Motl v 10:14 AM
Share