Trump vs censorship: The White House has launched a new website where Americans may report censorship on the Internet.


In recent 24 hours, I have watched several videos by the young pro-capitalist, Libertarian, old-fashioned right-wing YouTuber Soph T. – heavily censored YouTube channel, BitChute channel (yes, I can imagine that we will gradually move from YouTube – a soon-to-be-censored cultural Marxist hell – e.g. to Bitchute). Two blog posts ago, I mentioned her as the brilliant counterpart of the hysterical and unspectacular Greta Thunberg. 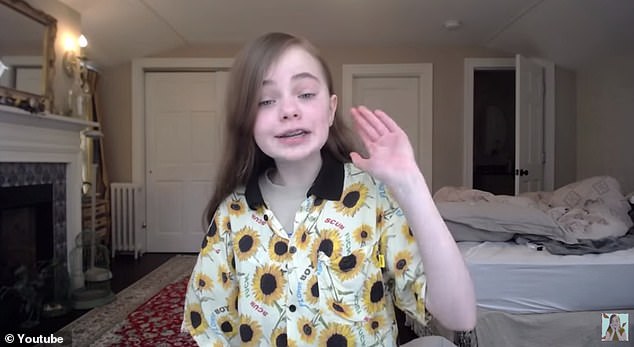 Soph T. – the surname is known to me – was born in September 2004 – the precise date is known to me – so she is 14.7 right now. She lives in an upper middle class suburb somewhere in the Bay Area. She's been creating unusually intelligent videos for a kid, mostly about gaming, when she was 9-11. She was gradually switching to more political topics. I find this evolution natural because I would also care about computer games at age 10-12 but politics became very important when I was 14-15 or so.

Nevertheless, this brilliant and ultra-articulate 14-year-old girl really does sound incredibly mature. I was impressed by some of her observations about Islam in the West, feminism and low-testosterone men's strategy to compete as if they were whining women, children's fan clubs, the content of many individual YouTubers' videos (e.g. why this fat Asian American kid Bolshevik is wrong), but especially her analysis of the differences between the Millennial generation and her Generation Z, not to mention some comments about the Italian art, the U.S. education system, and more. She is really discussing adult topics and in many respects, her analysis is deeper not only than those by most adults but even than the average influential adult thinker-YouTuber. She does sound like a genius kid.

For some time, I did think that she had to be an actor. There has to be a genuine mastermind who writes the script and she just reads it as a kid actor, perhaps trying several versions according to the film director, before it looks good as well as authentic. If you've ever tried to be a film director with kid actors, you probably agree that they end up being too shy, lacking the self-confidence, and things just don't look authentic most of the time. Her videos are completely different. They are lively and natural. She primarily refers to her older brother as an assistant. All of this would make sense. The planning, most of the monologues, and editing is done by someone else, perhaps by the older brother, and she is just acting as a charming presenter who makes the content way more attractive by being the apparent kid genius – her 900,000 YouTube followers simply cannot be surprising.

A more realistic co-author of her monologues is Vaporub Boy who is arguably a 16-year-old boy and, if I understand, a Brazilian boy.

But hours ago, I gradually converged to the theory that the videos, including most of the content and editing, are overwhelmingly her own – i.e. that she actually is a kid genius. As soon as I saw her, I had some inclination to believe this theory because her speech really does sound very authentic. Long passages seem like she is speaking naturally, she doesn't have to read anything from a teleprompter, and so on. What has finally pushed me to the "kid genius theory" as the default assumption was an explanation of her courage that I saw somewhere.

So she is incredibly brave, uses expletives organically, and it's entertaining to listen to her monologues. She is also rather combative. For example, using more straightforward words, she has warned the CEO of YouTube about the possibility of a rather permanent, second-amendment-inspired fix to the CEO's unacceptable interventions to Soph's video content. Now, Soph looks happy, full of energy, and enjoying herself. But in the warning to the CEO, she revealed to be a sufferer of the mitochondrial disease. One kid among 4,000 has it. Be sure that in average, this condition is more serious both than her braces as well as Thunberg's Asperger.

With this genetic disease, the energy doesn't get to cells. The disease has many types and levels, they may shorten the life to weeks or they may even prolong the life – while reducing the quality of life. People with the disease usually have assorted problems with various organs, may be more likely to get cancer, their growth rates may be modified (it may be delaying her breasts etc.), and the ageing may speed up. Papers indicate that the disease tends to reduce the IQ but the effects may be diverse.

So I actually believe that her brain has been ageing faster by a factor of 1.5 relatively to an average girl and she's mentally 20 years old now, a number compatible with the content of her mature videos. This obviously makes her an anomaly at the high school and therefore a natural solitaire – and I do believe that she should attend a university now, like Sheldon Cooper did at her age. Soph is smarter than all the professors at Harvard's grievance studies departments combined so she should become a full professor of some social sciences by the age of 20. (But she probably doesn't want to go in this direction; see how she interviewed a black adult guy and revealed her rather mature financial plans to make her living from the Internet shows – you may see in this video that she can act as a perfectionist diplomat, too.) She has also mentioned that at home, she is cooking dinners for her parents who return home tired and exhausted. She really is cool.

Her intense Internet life – which unavoidably made her one of the victims of the ongoing campaign to ban all non-left-wing content creators on the Internet (her partial deletions, bans, and erasure of comments was mostly stimulated by a nasty jerk at BuzzFeed News but the details don't matter – cesspools are full of such jerks; Soph has already thank him for the Streisand effect) – does indicate that she doesn't care much whether something happens to her. Maybe it even looks like she is not planning to live for too long.

Soph, I don't know any medical details but you should certainly plan a longer life. If that disorder affects you by increasing your ageing rate of a subset of organs (brain and others) by the factor of 1.5, you would still be expected to live for almost 60 solar years in average. It wouldn't be qualitatively different from many "ordinary" people. You may do amazing things in those 60 years – especially because the rate at which you live and produce brutally trumps almost everyone else.

The original YouTube video that was embedded here was disabled; I replaced it with another copy that may disappear again. To hear her mature Infowars answers, you may also go to Jones' website and jump to 1:14:20-2:02:40 here.

My doubts that Soph is the true mastermind behind her show have virtually evaporated after I saw a part of Alex Jones' interview with her today – wow, she really is amazing. And her parents, while supporting her and her free speech, have voted for Hillary! ;-) Her message of the pro-freedom Generation Z is wonderful and the optimism is contagious.

Here is another, fresh new one-hour-long interview with Soph if you have become a fan.
Luboš Motl v 7:58 PM
Share