Sadly, as reported by The New York Times and many others, Murray Gell-Mann died at home yesterday, May 24th, at age of 89.7. He was clearly one of the greatest living physicists – by integrated achievements. It was cancer that killed him – for years, he's used his broad scientific expertise to defeat that lethal process inside his body. See this talk by Gell-Mann and David Agus about cancer. Physician Agus considered Gell-Mann to be his mentor. Cancer has also killed Gell-Mann's first beloved wife. 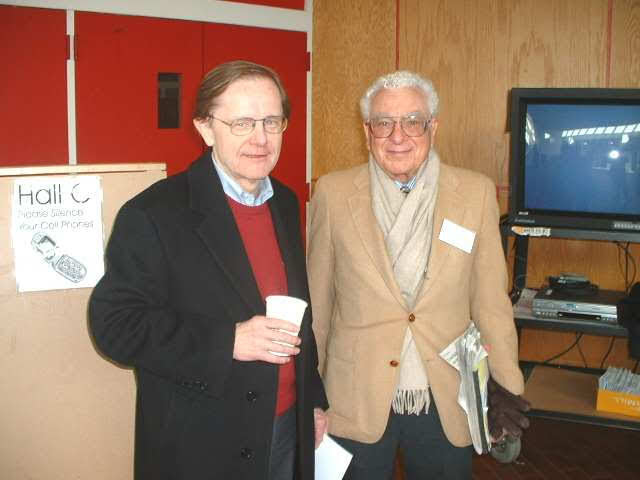 A picture of MGM and Thomas Appelquist that I took in Harvard's Science Center in 2005. If you think that you are a theoretical physicist but I haven't photographed you, then you effectively fail to exist.

He was born in Manhattan in 1929 to a Jewish family that arrived from the present Ukrainian territory – then a town named Černovice (close enough to Czechoslovakia so we have our name!) in our beloved homeland of Austria-Hungary.

He got his PhD when he was 21. His students included Ken Wilson (Gell-Mann really helped the renormalization group ideas to emerge, think about the Gell-Mann–Low equations), Sidney Coleman (who was celebrated at the event where I met Gell-Mann), Jim Hartle (that's linked to Gell-Mann's interest in foundations of QM – they were also among the people who authored the consistent histories), and Barton Zwiebach (a top expert in string field theory today, I discuss Gell-Mann and strings later). Gell-Mann has also discovered the seesaw mechanism that might give neutrinos their masses of the right magnitude.

Gell-Mann received his 1969 Nobel prize in physics mainly for the 1964 theoretical discovery of quarks (independently of George Zweig) – more precisely, as Ed S. insists, he got the prize for the Eightfold Way which only "led" to quarks – which made the classification of hadrons (proton, neutron, and their cousins) meaningful. Gell-Mann copied the name "quark" from Finnegans Wake by James Joyce ("Three quarks for Muster Mark" – indeed, it's not "Mister Clark" as I wanted to write LOL). That fancy choice was an early example of his deep interest in linguistics (he was claimed to speak 13 languages fluently, wow).

He was also obsessed with birdwatching or ornithology, archaeology, and more conventional intellectual interests. He possessed three houses in different U.S. states (Santa Fe, Aspen, Pasadena in NM,CO,CA), one of them was a "museum", and he loved-and-knew expensive wine and cars (guess where the "Jaguar" comes from in "Quark and the Jaguar" – the animal was there just to mask that he wanted to brag about the car).

Gell-Mann also stole the term "Eightfold Way" from the Eastern religions to describe some \(SU(3)\) octets and then he was surprised that many people thought that particle physics had something to do with Eastern religions. He has clearly done more fundamental work involving \(SU(3)\) in physics (especially the flavor symmetry) than any other physicist – which is also why the \(SU(3)\) counterparts of \(SU(2)\) Pauli matrices are called the Gell-Mann matrices.

Inspire shows that he has written 9 renowned papers – which are dominated by the strong force but actually include the electromagnetic and the weak force papers, too. (The weak force paper is the famous Feynman—Gell-Mann FG paper that isn't FG, i.e. fully good.)

Gell-Mann was a collaborator and a well-known rival of Feynman at Caltech. Gell-Mann represented the approach that wants to be "more conventional or aligned with the community" while Feynman was the "maverick".

Gell-Mann has had one adopted child and two biological children, Lisa and Nick. Those have had a strained relationship with their dad. In particular, instead of being inspired to do some intelligent stuff, Lisa – previously a dutiful child – was suck into extreme left-wing politics – the Central U.S. Organization for Marxism-Leninism – by an incredibly hypocritical rich man from a New York neighborhood. So I guess that he didn't like the left-wing bastards who have basically destroyed his daughter.

I have spoken to Gell-Mann for half an hour during the 2005 Sidneyfest (celebration of Coleman's life). He was a captivating storyteller and he was excited that I was interested in Feynman's opposition to toothrbrushes – Gell-Mann really thought that Feynman's teeth were decaying and he was doing really stupid things for his maverick status – and in Gell-Mann's role in a wonderful TV commercial for Enron (for younger readers: Enron was something like Tesla but 20 years ago).

While Feynman loved to mock John Schwarz in the elevators of Caltech ("How many dimensions does your world have today, John?"), Gell-Mann was a key sponsor and defender who has allowed an early string theory group to emerge at Caltech. In the early 1970s, Gell-Mann was just capable of figuring out that string theory was likely to be here with us to stay – as the default state-of-the-art foundation of all of physics – at least for 50 more years. Barton Zwiebach's years as Gell-Mann's student say something, too.

But just to be sure, Gell-Mann didn't understand the value of string theory right away. As recently as in 1970, he mocked Lenny Susskind for strings, too – and he played some role in the delaying of Susskind's paper.

The difference between Feynman's and Gell-Mann's attitude to string theory had a very simple primary reason. As this 3-minute monologue by Gell-Mann shows, Gell-Mann actually understood string theory at a level that was about 50 times more detailed and technical than Feynman's (Gell-Mann knew something that no critic does, namely the structure of actual papers, such as those about sectors in the superstring). So Feynman did talk as an absolute layman, Gell-Mann did not. Every person in the world who says negative things about string theory is really a layman. In this 2-minute monologue, Gell-Mann complained that it was a pity that Shelly Glashow became the original hostile promoter of the fundamental misconceptions about "string theory that couldn't be tested" etc. More on Gell-Mann and strings, also in his Note on Prehistory of String Theory (making Gell-Mann's connections to early stringy technical results clear).

This book is an introduction to the quark theory for 1-year-old students.

Aside from his support for string theory, Gell-Mann is also one of the forefathers of naturalness – he coined the totalitarian principle which states that everything that is not forbidden is mandatory (just like in the totalitarian regimes). In particle physics, it means that all coefficients that can't be proven to be zero by some principles are bound to be nonzero and probably "of order one" in some units. He has also opposed "quantum flapdoodle", the misuse of quantum mechanics' alleged weirdness designed to push other topics in strange directions.

Gell-Mann's name has appeared in 103 TRF blog posts. You may want to read some of them. Try a Google ordering by relevance.

P.S.: If you want to share my frustration about how much the BBC's and other popular science programs have dumbed down in recent 50 years, watch Strangeness Minus Three from 1964 (three parts featuring both Feynman and Gell-Mann; and Yuval Ne'eman, too). One part of the gloomy evolution is that journalists have generally turned into a cesspool. Another cause of the evolution is that the scientists have lost the spine and self-confidence to insist that they determine what is actually being said about science. The body of scientists have been turned into a obedient herd of effeminate tools.


Here you have another, 12-minute-long monologue about the birth of the quark model (thanks, Willie!):

He ordered the hadrons into multiplets, thought about subunits, and found out that they – the quarks – had to have fractional charges \(+2/3\) and \(-1/3\). With a napkin during a visit, he realized that this counterintuitive trait wouldn't be a problem as long as the quarks stayed confined (it was almost a decade before the confinement was derived from QCD). He called the quarks "mathematical" because they had to be "confined". Many historians later wrote that the word "mathematical" meant that he didn't believe the quarks at all which is completely wrong!

While the Nobel foundation didn't make that mistake, the fabricated confusion was a reason why the prize wasn't given to him easily and simply "for the quarks", as dictated at the top. That's obviously what should have taken place.

These days this position is even more widespread – various overgrown clones of the critics of physics that emerged in recent 15 years use the word "mathematical" as if it were something wrong – and they completely contaminate the journalistic environment surrounding physics with these toxic delusions. But there is absolutely nothing wrong about it – quarks are just inseparable from each other. The quark theory turned out to be perfectly correct – the quarks were just not directly observable in isolation which doesn't contradict the fact that they're demonstrably and completely real. The case of string theory is so far perfectly analogous. It's also "mathematical" but it doesn't mean that there is anything "physically unreal" about it! Clearly, all the incompetent people have failed to understand that mathematics must play and has played a decisive role in physics since the very "Newtonian" beginnings – they're still dreaming about a setup in which mathematics is suppressed, declared to be either wrong or not even wrong, and decisions are made by some sociological tools or bullying.

Gell-Mann has repeatedly tried to talk to the historians who write the untruths that were frustrating to him and fix their perverted story about the history but it was like talking to the wall. Also, Gell-Mann said that he had the sound approximating "cork" before he found the final spelling "quark" in Joyce's book. I think that if this chronology is authentic, it was quite some good luck that Joyce wrote about quarks – and in fact, there were three quarks in the sentence!
Luboš Motl v 12:21 PM
Share