No global symmetries in QG 2019

Peter F. was intrigued by an article in Phys.Org,


about a paper by Hiroši Ooguri and Daniel Harlow that was just published in a good enough PRL. Note that these two men have written two similar papers together. 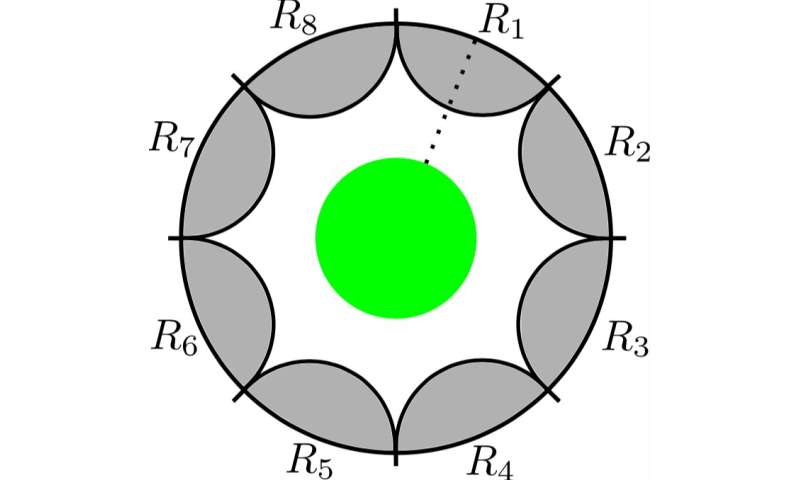 The heart of the main Harlow-Ooguri argument. The global transformation would be a current integrated or transformations composed of boundary regions \(R_i\) but each of them only affects a nearby grey wedge, leaving e.g. the green bulk non-transformed. It follows that the boundary currents or operators responsible for symmetries cannot correspond to global symmetries in the bulk.

Well, the main claim, as we promised in 2017, is that the symmetries in the bulk of quantum gravity have to be local, gauge symmetries. No global symmetries are allowed. And this statement also extends to non-Abelian and discrete symmetries, they argue. They praise their own paper as the most general, rigorous, and conceptual proof of a "similar" kind of a result.

Now, the statement that quantum gravity doesn't allow the global symmetries has been a part of the lore for decades – I guess that many sharp physicists have been convinced about it before Daniel Harlow was born. I have surely believed it from the 1990s. My adviser Tom Banks would make sure that I did believe it after 1997-1998 because he has always been a physicist who liked to get familiar and refine all similar lore.

The spirit of their proof may be found on Page 6 (8/175) of this long paper. They prove the qualitative statements about the character of symmetries within theories that have both the AdS bulk description and the dual boundary CFT description. They assume that there is a global symmetry and there must be some currents as well as fields that create charged objects.

They need to assume some kind of locality for the "wedges": the operators corresponding to bulk objects near (or very close to) the boundary must be written as operators acting within a (very small) region of the boundary CFT. With this assumption (which might of course be incorrect in principle – local bulk objects could be created by Wilson-line operators going all over the boundary along some paths etc.), the proof of the most basic theorem is trivial. If there is a generator of the global symmetry within the CFT, then it is an integral over the boundary – or a sum over terms from different regions. But each region is only capable of transforming objects in some "wedge" which is near the boundary.

It's great. I haven't written the most precise arguments for the "lore" that I knew after the AdS/CFT was proposed in late 1997 but I guess that they could be virtually identical. It's good that someone writes these things explicitly but I would distrust the statement that their explanations are really new.

At any rate, I believe they are correct and they are effectively relevant for all of quantum gravity. The fact that the proof took place in the AdS space is hardly a limitation. Gravity – even when it is quantum gravity – should still be local in some conceptual sense. It means that its basic properties (such as the existence of symmetries, global or local, and gauge fields) doesn't depend on the asymptotic behavior of the spacetime or the events in very distant points.

It means that if global symmetries are banned locally in the AdS spaces with a CFT dual, they are almost certainly banned in any other spaces of quantum gravity, including those that are asymptotically dS. This assertion is a reasonable expectation. I don't have a full-blown proof, of course. I can't have a full-blown proof because I can't even rigorously define general concepts such as a "general quantum gravity in an asymptotically dS space" – well, we can't define quantum gravity in any de Sitter space terribly well.

Nevertheless, papers like that represent clear progress. Physicists are finding a mixture of rigorous, reliable results and results that are just "rather persuasive" but that nevertheless shape the expectations and move them in certain directions, directions that are increasingly justified by the evidence.

If the baryon \(U(1)\) is a local symmetry, then there should be gauge bosons – baryon-charge counterparts of photons – that mediate a new force. Such a new force would cripple the tests of the equivalence principle (there would be new \(B\) forces between electrically neutral pieces of matter, and those wouldn't be proportional to the masses) unless the gauge coupling \(g_B\) is tiny.

However, even the loophole with a tiny \(g_B\) may be basically excluded by a quantum gravity-based, swampland-like reasoning, namely by the weak gravity conjecture. Coupling constants shouldn't be too low, our conjecture states. In effect, the weak gravity conjecture prevents you from "fraudulently circumventing" the ban on global symmetries by considering local symmetries with tiny couplings. Indeed, this was a top motivation of the whole conjecture that I/we added to that paper.

To summarize, quantum gravity-based formal arguments make it very likely that despite the non-observation of any proton decay so far, proton is ultimately unstable and may decay although the lifetime may be much longer than the current bound.

You can see that quantum gravity – as exemplified by string/M-theory – increases the predictivity of the framework of physics. It generally bans some things (global symmetries in this case) and it also prevents you or Nature from applying "cheap tricks" to circumvent the bans. This is an ability of quantum gravity that the critics of physics rarely understand. They think that any rule can be circumvented by a trick, they may always find a loophole, fool Nature in any way, which is why they think it's right to ignore any formal finding in string theory or theoretical physics in general. But Nature, as soon as the consistency of quantum gravity is added to the picture, doesn't really want to be pißed upon.

In other words, whenever we find a principle or a no-go theorem, Nature doesn't obey it just theoretically. It also obeys it in practice. Your method to circumvent the ban unavoidably predicts new effects whose observability is nonzero – the observability is implied to be greater than a lower bound that Nature guarantees not to be "arbitrarily small" in general. Qualitative lessons of quantum gravity matter even in practice.

You know, the knowledge of probably correct answers to questions such as "should the fundamental theory allow global symmetry" is very important and, in some deep sense, primary for a meaningful research program in fundamental physics. Do you remember Feynman's Cargo Cult Caltech commencement speech? A man named Young did some careful experiments – those are analogous to this swampland-like research of quantum gravity – that were ignored by the sloppy researchers who just let their rats run through the mazes chaotically, without a proper quality control. Feynman wrote:


They just went right on running rats in the same old way, and paid no attention to the great discoveries of Mr. Young, and his papers are not referred to, because he didn’t discover anything about the rats. In fact, he discovered all the things you have to do to discover something about rats. But not paying attention to experiments like that is a characteristic of Cargo Cult Science.


Young discovered things like "you have to be careful not to allow the rats to sniff something" etc. if you want to know how the rats get their information etc. Rules like that are necessary for you to do all the experiments properly. Similarly, the stringy or swampland-like research also determines answers to fundamental questions such as "should you play with hypothetical theories that have global symmetries?". And the answer seems to be No: global symmetries shouldn't be there at all.

In this analogy, the "work" on new unifying theories or theories of quantum gravity that ignores the stringy research is a cargo cult science. People doing things like that are just letting their rats recklessly run in mazes – but they may keep on doing serious mistakes (such as the inclusion of global symmetries) that render their life-long research totally worthless.

On one hand, the stringy research is "analogous to any other legitimate type of research". On the other hand, it is often more fundamental and defining or redefining the rules of the game. In this sense, the string theory research may be considered "meta-research" or "metaphysical research". But that doesn't make it less relevant for science. On the contrary, it makes it more relevant for science because every piece of scientific research assumes some metaphysics and it's damn important for this metaphysics not to be completely wrong.

The search for the deepest theories in Nature is a very advanced activity that is unavoidably detached from the people's everyday intuition. Even the most obvious metaphysical assumptions may be wrong. And that's why every person who approaches these questions as a real scientist must be ready to question and revise any assumptions, however obvious, and he must prefer the answers to the fundamental questions that are supported by the evidence, not those that are supported by some prejudices or intuition based on the everyday life. Much of the formal research in quantum gravity and/or string/M-theory is a search for the rules of the game that Nature Herself respects, for the refinements of the rules of the scientific method.
Luboš Motl v 7:25 AM
Share