The NIPCC reports are actually amazing

Because a VIP from the vicinity of ex-president Klaus has told me that it would be a good idea, I've spent a few days by translating the Summary for Policymakers of the latest 2019 NIPCC report into Czech. Some climate skeptics may be amateurs; others are clearly competent and brilliant but they may be overspecializing on some aspects of the climate debate or even a bunch of papers (or one paper). 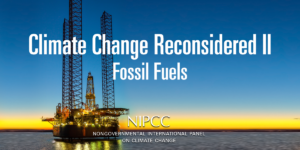 The NIPCC reports have really been a series of eclectic and comprehensive documents that discuss a great majority of the aspects involved in the climate change debate. And the reports aren't the work of amateurs; the latest report cites something like 2,000 articles whose bulk may be said to be peer-reviewed in the standard sense.

The 2019 report – see the full book (PDF) that you may buy in the paper form from the Heartland Institute (the publisher) – is focusing on the cost-and-benefits analysis of the usage of fossil fuels and/or mitigation policies to reduce the fossil-fuel-related CO2 emissions.

Here you have the Summary for Policymakers that I was dealing with. Note that some links on the website, climatechangereconsidered.org, are broken, probably because they were moving the files from one folder to another and forgot to update the hyperlinks. You may find all the documents on the web if you search carefully.

The full 2019 book has 782 PDF pages – quite a piece of work. Note that I was honored to be named as one of the 39 co-authors of the oldest 2009 NIPCC report which had 868 pages. As you may guess, my inclusion was partially due to Fred Singer's attention paid to (geographic) diversity of the team. My contributions to the final text were quite certainly smaller than 1/39 of the huge volume. That doesn't mean that I was ignorant about most of the stuff in that report. I really was on the same frequency.

Previous NIPCC volumes have also been extensive and they dedicated more space to the physical and biological scientific foundations. The newest 2019 report dedicated to the fossil fuels is unavoidably more practical and economics-oriented.

But it rationally discusses all the extra layers of the causal chains of the climate warning. Even if one assumes that there will be a warming, does it hurt the environment? The economy? Don't the benefits exceed the costs? Don't the costs of the mitigation policies exceed their benefits? As you may guess, the correct answers to all these questions – advocated in the NIPCC report – are almost universally the "skeptical ones".

I think that you don't need to be a PhD (let alone a specialized PhD in climatology) to understand almost all the stuff. It seems to me that most of the conclusions are a matter of common sense.

In the list of authors of the NIPCC report, you may see a clear dominance of the English-speaking countries (U.S., Canada., U.K., Australia, New Zealand) including some "nations that are very good in English" like the Scandinavian ones. Some of the people are in their productive age but the percentage of the retired men and emeritus professors is huge. You may blame it on the fear and opportunism of the people in their productive age.

The huge percentage of retired vice-admirals and commanders-of-chief of the U.S. navy has made me laugh out loud. But the percentage of the PhDs is even higher. ;-) Many of the authors have legitimate PhDs from climatology, atmospheric physics, and more. And of course, Fred Singer himself is a true pioneer of the weather satellites. As he approaches 100 years of age, his activity seems to accelerate!

You're invited to look for some other interesting documents and resources at the NIPCC website.

With some deeper knowledge of the content of the reports – even deeper than the knowledge I had when I was a co-author LOL – I would be willing to insist that the quality of the NIPCC report really is higher than the quality of the IPCC reports. Even more obviously, the NIPCC reports are more impartial, less ideological, and less agenda-driven. The fact that "I" and "NI" stand for "Inter-governmental" and "Non-governmental International", respectively, has consequences for the objectivity of the content.

It's so unfortunate that despite the higher quality of the NIPCC report (or at least comparable quality, if one were really generous to the IPCC), the left-wing media establishment – in some loose alliance with the governments – was capable of promoting the IPCC reports as if they were the Holy Scriptures while the NIPCC reports remained almost completely hidden from the world public. So far, the retired and impartial vice-admirals haven't been enough to defeat these powers.
Luboš Motl v 12:59 PM
Share