WGC and modular invariance: does the WGC constrain low-energy physics at all?

Physicists writing papers about the Weak Gravity Conjecture (WGC) seem to be particularly excited about their work so they often submit their paper to be at the top of the hep-th list. Two weeks ago, a paper on the axion WGC was posted one second after the collection of papers for the new day started.

That's exactly what was achieved by another group of authors, Shiu and Cole at Amsterdam and Aalsma in Madison, who just submitted


a second after the beginning of the new arXiv day. A funny achievement of this paper is that it is the 500th followup of the WGC paper according to Inspire, so the Weak Gravity Conjecture has made it to the highest, "renowned", category of papers. Both Arkani-Hamed and Vafa have 19 renowned papers so there is no reason to congratulate them, and Alberto has 2+1 renowned papers with Nima et al. But it's my first renowned paper, so congratulations to me. ;-)

One followup is needed for our 7-author pp-wave paper to join the Screwing String Theory as a famous paper (250+) and one or two dozens are needed for the two quasinormal papers to do the same.

In a recent discussion, commenter nicknamed TwoBs has suggested that the WGC and perhaps similar swampland criteria are (almost?) vacuous because low-energy considerations along with the mere fact that the low-energy effective theory is an RG limit of a more fundamental theory at high energies is enough to prove that e.g. gravity is the weakest force and similar inequalities.

In particular, the WGC says that there exist elementary particles whose charge-to-mass ratio exceeds the ratio calculated for extremal black holes. That's enough for a weak form of WGC – it's enough for large extremal black holes to be able to evaporate although their "right to do so" is on the edge. And TwoBs has pointed out that one may basically show that some higher-derivative corrections to the black holes' charge-to-mass ratio is guaranteed to have the right sign required by the WGC.

At this level, I would agree that the WGC is basically "proven" because the slightly "superextremal" black holes may be counted as objects that are predicted by the WGC to exist.

Well, Aalsma et al. – the authors of the new paper – disagree with this view of TwoBs. Instead, they say that these large "superextremal" black holes whose existence may be proven just from some low-energy effective field theory cannot be considered elementary particles because their mass is too high and the effective theory where they're treated as elementary particles is no longer valid at the high energies comparable to these black holes' mass.

I am not sure where I stand on this subtle debate. Of course, we weren't terribly rigorous about our statement. But I think that what we wrote was that there exist some objects with the "superextremal" charge-to-mass ratio and the black holes that are heavier than the Planck mass – and those are the microstates whose charge-to-mass ratio only depends on the low-energy effective field theory, in some expansion – are enough to satisfy the WGC. We didn't require these states to be very light.

In fact, it's very likely that if the heavy black holes that are "superextremal" according to the charge-to-mass ratio exist, there must also exist "rather light" ones whose mass is at most of the order of the Planck mass because it's not clear where the extra "parameteric" enhancement of the minimum black hole mass that obeys the WGC could come from.

At any rate, Aalsma et al. at least think that we should have formulated a stronger version of the conjecture that basically says that the elementary particles with the "superextremal" charge-to-mass ratio should also exist at masses that are lower than the Planck mass, or at least lower than or comparable to the Planck mass. After all, the probability that a large black hole Hawking emits another "rather large" black hole is exponentially tiny and maybe we don't want the "loophole" to be this shaky.

And once we strengthen the WGC in this way, i.e. once we require the "superextremal" sub-Planckian particles, the low-energy arguments no longer guarantee the existence of such states. I am not aware of terribly strong arguments that would say that we should strengthen the WGC in this way. But to be sure, this strengthening must be considered important for the paper by Aalsma et al. to be important, too! ;-)

OK, so Aalsma et al. implicitly say that all of us should strengthen the WGC and the states with the "superextremal" charge-to-mass ratio should be sub-Planckian. Can we say something about the existence of these light particles that guarantee the WGC in that case? To justify their "Yes" answer, they use a paradigm that all of us have always wanted to be relevant for the swampland arguments, namely the UV-IR connection.

The laws apparent at high energies (UV, ultraviolet region) – like the detailed patterns of the heavy black hole microstates – are being linked to the laws seen at low energies (IR, infrared region). While banned in the effective field theories, pretty much by their definition, the UV-IR connections are believed to be omnipresent in string/M-theory. But there really exists a subclass of these connections that is understood well – the modular invariance of perturbative string theory.

When the string coupling constant \(g_s\ll 1\) is very small, string theory may be well described by the actual old-fashioned version of string theory with world sheets of a well-defined low-genus topology. The one-loop topology for closed-string diagrams is the torus which is a rectangle with the periodic identification of the top-and-bottom sides and the left-and-right sides, like in Pacman. 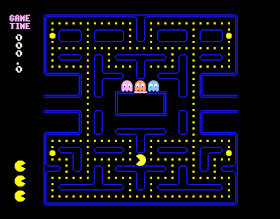 This only has the left-right identification.

A funny fact is that a rectangle may be rotated by 90 degrees. So you may consider the vertical dimension of the torus to be the Euclidean time in the thermal partition sum (expressed as a path integral); or the horizontal one (or infinitely many other, tilted direction, but let's not go there). And the invariance of the toroidal path integral under the rotation by 90 degrees may be interpreted as an identity relating two seemingly different partition sums. This equality is known as the modular invariance.

When one of the rectangles is "short and wide", the other one is "tall and thin". In the language of temperatures, it means that when one partition sum is dominated by low-mass string states, relatively to the string scale, the other one is dominated by high-mass string states. It means that the distribution of the low-string vibration states isn't really independent from the distribution of the high-string vibration states. And in a heterotic string case, Aalsma et al. calculate the masses as calculable functions of \(\alpha'\), the inverse string tension, and decide that it's really enough to strengthen the WGC.

Due to a calculation involving the toroidal world sheets, the weak form of the WGC which may be justified by purely low-energy effective field theory arguments – the existence of some mildly "superextremal" black holes – may be strengthened to the strong form of the WGC – the existence of low-lying string excitations that are "superextremal" by their charge-to-mass ratio. The strengthening itself requires characteristically stringy identities, those resulting from the modular invariance.

It's very interesting but I think that the very question whether the WGC and swampland conditions "really depend" on some characteristically stringy properties of quantum gravity will not quite be settled by this paper. When it comes to this big question (which is morally close to the question "how much we have proven that a consistent theory of quantum gravity has to be string/M-theory"), the paper by Aalsma et al. – albeit a very interesting paper – may be considered a rationalization of one possible answer ("Yes, stringiness is demonstrably essential for QG to work"), not really an impartial proof that this answer is better than the other answer.
Luboš Motl v 11:42 AM
Share