In the recent year, I participated at two anti-Babiš rallies in Pilsen – although my presence was always a bit experimental (well, comparably experimental to my "attendance" of the anti-Iraq-War rallies in Boston in late 2002) – because I think it's wrong for him to bend the court system, it's wrong to get billions of crowns in subsidies, and I am not excited about a former communist as a prime minister with an extremely primitive, purely material way of thinking about everything.

But I saw the folks who seem to be the actual drivers behind these events – and what is the possible alternative that they could give us instead of Babiš. In many cases, I must say "No, thank you." You know, I applauded many people's clichés and they were nice or touching. But it seemed obvious to me that they were guests, not the drivers. The drivers seem to be far left SJWs.

Right now, the biggest rally in Czechia since 1989 is taking place in the Letná Plain in Prague – an elevated empty place above the Moldau River, not far from the Prague Castle (3D map, street view). The world's biggest Stalin statue was standing there up to the 1960s. The name "Letná" is an adjective seemingly related to "let" which means "a flight" but "Letná" actually comes from old Slavic "Leteň" which is a place illuminated by the Sun – and I happen to live meters from Pilsen's own Letná. ;-) See the live video now. Organizers and others agree with the estimate of 200,000-250,000 people. Well, T-Mobile has "calculated" the number to be 258,000 – not sure since when phone providers are experts in this calculation, especially given the fact that one phone doesn't translate to one person and the ratio may depend on the situation.

Many of them have arrived from faraway places including Moravia – by cars, by trains. The public transportation in Prague has largely collapsed. About five subway stations were shut down – the trains are going through. Also, the phone providers are locally overloaded so you may fail to call anyone if you attend the rally. Dr Milada Horáková Avenue was also shut down by the police around the rally. (Across this street named after the only woman executed by the Czechoslovak communists for her political views, you find the Letná Stadium, the home of AC Sparta Prague [not FC, thanks, Karle B.], a top 3 Czech soccer club.)

Right now I have been listening to the speeches for an hour or two. Some of them are OK. Some of the pundits are actors or singers – they sing etc. But the subsidy fraud, bending of the court system etc. aren't even being mentioned. Instead, I am hearing lots of insane attacks e.g. against the Industrial Farming – which the lunatics in Germany's Green Party want to ban altogether. Clearly, they have comrades in Czechia, too. 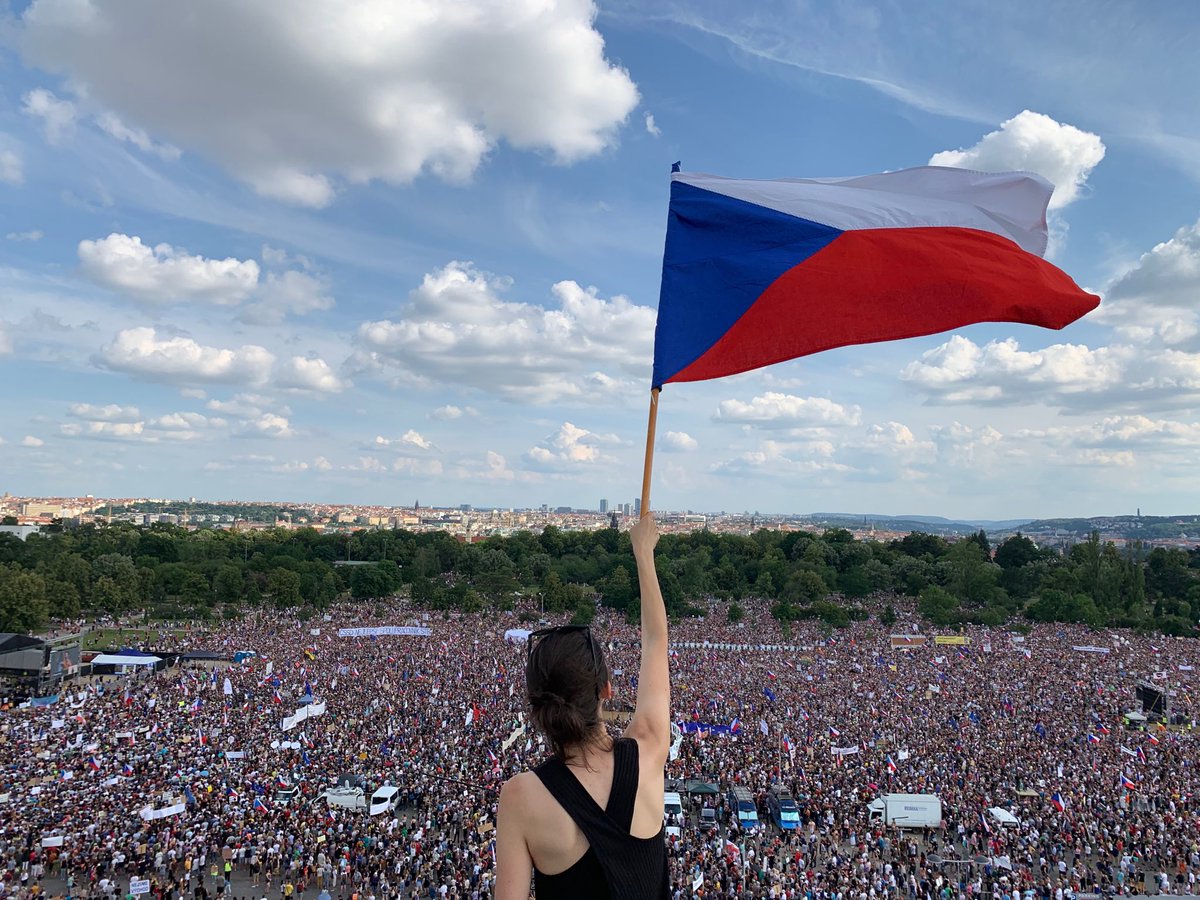 Also, there are tons of personal attacks against PM Babiš and President Zeman and the conspiracy theories linking them to Russia and China. Many speakers parrot the anti-Russian and anti-Chinese Nazi-style clichés, along with anti-Trump pronouncements. So far, the most obnoxious speaker turned out to be Mr Bohumil "Bob" Kartous. I know this guy because he's been wrong about the right methods to teach mathematics to kids. But this guy is totally wrong about absolutely everything. A hardcore SJW. He and/or other people have also supported the climate hysteria, Gretenism, and other ideological pathologies.

His tirades made me laugh when he switched to an attack against Huawei. The biggest crime of the prime minister is that an employee of his uses a Huawei product. I was laughing out loud, enjoying lukewarm water in the bathtub, especially because I was watching his monologue on my excellent new tablet, Huawei MediaPad M5 8.4. I really recommend you this beast – it is incredible. The display is supersharp and the contrast is huge, the speakers are loud, the octacore chip is fast, the 4 GB memory is great, it's light, almost no bezels, and the metallic design looks fancy.

Babiš is doing bad things and he's wrong about certain things. But we live in a world with much greater threats – people who may deliver a much scarier future than a "somewhat modernized" communist cadre who has become a billionaire. If I really had only these two choices who will lead our country – Babiš or the collective power of the speakers at this Letná Plain rally – I wouldn't hesitate and I would choose the comrade immediately. Many of these people, starting with Mr Kartous, are just way over the edge. But even if Kartous were eliminated, these people would clearly bring the globalist neo-Marxism that has hijacked much of Western Europe and Northern America.

On the other hand, I think it's right that rallies like that are allowed – and I obviously disagree with the hateful comments that all participants of such rallies are scum (so yes, I disagree even with some dramatically hostile statements by Klaus Sr and Klaus Jr although I am ready to vote for the latter now). After all, I've been a participant at two similar rallies, too. People have various motives, reasons that make them attend etc. Prime minister Babiš said that "he didn't understand why the people were in the streets". LOL, there is no single reason but his lack of understanding is pretty bad, anyway.