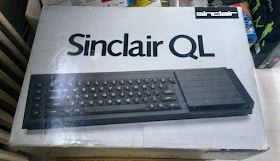 Sinclair QL (Quantum Leap). Sometimes in the 1980s, I was so attracted by an article about that computer that I memorized a long 1-page article about it. With hindsight, my worshiping seems rather irrational. By some technical measures, it could have been a stronger computer than Commodore C64 that I used to have – but it turned out to be unsuccessful and less software had existed for QL.

Philip Ball wrote a text for the Quanta Magazine


which makes semi-covert statements that an experiment has allegedly disproved the basic principles of quantum mechanics. That much is clear from the title. The subtitle is even a bit more radical than that:


An experiment caught a quantum system in the middle of a jump — something the originators of quantum mechanics assumed was impossible.


Another text saying that the founding fathers of quantum mechanics were not only wrong but idiots, as some current geniuses revealed. In reality, it's the other way around, of course.


To catch and reverse a quantum jump mid-flight by Minev, Devoret + 7 co-authors


which reports their results involving an effectively 3-level system and something that they consider a violation of the quantum mechanical wisdom.

An artificial superconducting atom is observed to transition from level 0 to level 1 and the authors claim to predict the transition in advance, and to be continuous, after all, by observing whether the transition to level 2 has taken place.

And they make various extraordinary statements – although a bit shyly – such as: the 3-level spectrum isn't really discrete; the unpredictable stochastic process of quantum leaps is predictable, after all, and more. Needless to say, every single one of these statements is completely wrong.

When one measures an observable such as \(H\) that has three eigenvalues, \(E_0,E_1,E_2\), then the spectrum is discrete and there is no continuous way for the system to interpolate between the levels. The jumps are discrete or quantized, indeed. The discreteness of some observables is the reason why quantum mechanics uses the "quantum" adjective. To dispute this basic fact is an extraordinary statement.

Observing the presence of the atom at the highest level 2 may be claimed to be "clever" by someone who just hypes some random experiment but a more unambiguous fact is that this observation changes the experiment. In particular, everyone who knows the Quantum Zeno Effect realizes that if you constantly watch whether the system that was known not to be at level 2 has transitioned to level 2, it will never get there! And if you pretend that you don't have to be careful about what you're actually doing with the system and what you're observing because it doesn't matter, then your conclusions are guaranteed to be garbage. In quantum mechanics, it always matters whether you're observing and what you're observing. Lots of people can't reconcile their limited minds with this basic new fact that refutes some assumptions that used to underlie classical physics but it's their fault, not a fault of quantum mechanics.

The fact that by some added constant observation of something, you are changing the experiment, is something that undergraduate students should learn in the first lectures of an introductory quantum mechanical course. However, it's normal for science writers and even some experimenters to misunderstand these basic these days, and that's why they are often spreading brutal misinterpretations of what is going on which usually culminate in bombshell statements that are totally incorrect.

Quite generally, it should be obvious that the experimental part of this work is rather trivial and straightforward. But most of the paper in Nature is about some theoretical interpretations if not philosophical musings. And because the authors aren't theorists – or at least, they are not good theorists – the result of this "visiting scholarship" into theory is unsurprisingly bad. Every sentence is at least a little bit wrong. Scientists simply shouldn't try to do scholarship in disciplines they're not verifiably good at.

Needless to say, they haven't found anything that would disagree with the predictions of quantum mechanics, as defined by the Copenhagen folks and derivable from the Copenhagen rules, which is why their statements that they have refuted some Copenhagen ideas is just completely wrong. But a general problem with the culture of science writing as of 2019 is that it doesn't seem to matter to many people in the "system" that the experimenters haven't found anything that violates the predictions by the Copenhagen QM. Instead, they just do some experimental masturbation that isn't new in any way and use this masturbation as an excuse to write completely silly personal opinions of the experimenters about theory. They just use some castrated crippled quasi-classical idiosyncratic theory, falsify this straw man, and claim that some extra mutation is therefore needed. That's not what the proper role of experiments and theory looks like in proper science, Gentlemen. Experimenters have the role to verify the predictions of verifiably well-defined theories, usually written down and calculated by theorists. They may use their creativity to design a clever way to do so but they shouldn't be verifying their own misinterpretations of some philosophical statements. The philosophical statements made by the QM founding fathers are really brilliant generalizations from lots of experiments that were done by very careful and ingenious men. An average man can't change these big principles by randomly talking about a single random experiment. In this sense, experiments like that (plus the interpretations) resemble Afshar's alleged falsification of the Bohr complementarity that I wrote about almost 15 year ago on this blog – I've met Afshar in the pub at that time – the time is fast.

I don't think it makes sense for me to discuss the paper and Ball's summary more deeply. One would have to correct every sentence that is wrong or at least misleading – which is basically every sentence both in Ball's text as well as the text in Nature.