ČEZ, the Czech Energy Works (České energetické závody), is the main Czech power utility company. It runs most of the Czech power plants, a big part of the grid, also sells gas to the consumers, and does other things. It's just sold its business in Bulgaria but it is generally trying to invest abroad, too.

The market cap of ČEZ is some $12 billion. 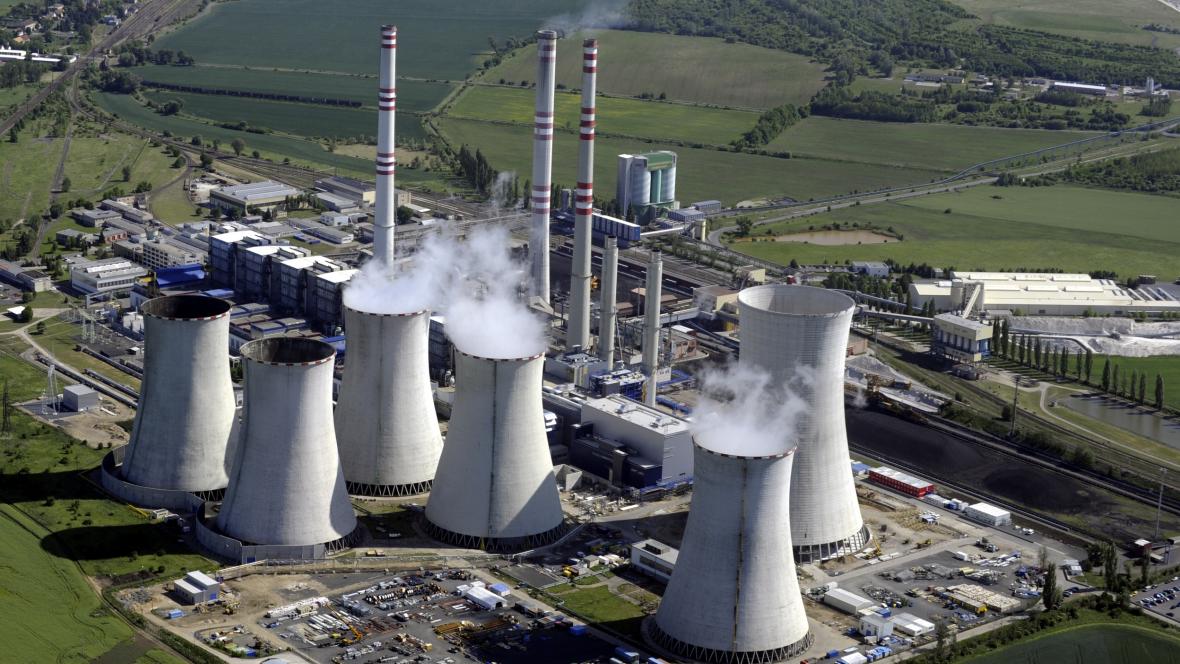 OK, today, we have the warmest day of the year so far, with temperatures reaching 35 °C – it seems unlikely that the "absolute" records will be broken today, as promised yesterday; in August 2012, Dobřichovice near Prague saw 40.4 °C. Next week, the temperature high should be just 25 °C. (Update: Pilsen-Bolevec, 2 miles from me, saw Czechia's highest temperature today, 37.9 °C. The absolute Czech record safely survived.) PM Babiš is going to survive another no-confidence vote. And ČEZ has a shareholder's meeting, also deciding about the dividend. ČEZ is also planning to sell Počerady, a brown coal power plant, to the billionaire and "coal baron" Mr Pavel Tykač – which would extend its lifetime – according to an agreement from 2013.

So they have allocated about six activists to invade the shareholder's meeting. Well, one of the six activists was a big piece of coal. The coal was female and the organizers demanded the coal girl to take the coal costume off to be allowed to enter the hall where the meeting takes place. It turned out that she – the coal – only had underwear beneath the coal. Well, that's not our problem, the organizers insisted. The coal must be undressed because they can't feel safe, guns could be underneath! ;-)

At other places, a girl in the underwear at a shareholder meeting would be scandalous and her being green would be shocking as well. Here, people are tolerant, take it calmly, and sort of follow the well-defined rules. You have to have an ID plus the wristband proving you are a shareholder, and then you can attend the meeting. There is absolutely no rule that would prohibit girl-shareholders in their underwear so the organizers very correctly told her that there was no problem with that! ;-)

You know, the rules are being applied to an unusual situation here but they're being applied totally correctly and reasonably: a girl-shareholder in a coal costume isn't safe but a girl-shareholder in her underwear is perfectly fine! A stripper for free could even be considered an ingenious move by the ČEZ management. I think that even a shareholder without any underwear would be fine but Greenpeace didn't have the balls to go this far this time.

In Western Europe and North America, the story would evolve differently. When a female piece of coal arrived to a utility's shareholder meeting, it would immediately be promoted to the king of the meeting (or a queen, but women may also be kings these days), the CEO, and recommended for the Nobel Peace Prize. The shareholders would shut up and worship.

At 0:00, in the middle of the CEO Daniel Beneš' monologue about the 2018 financial results, you start to see yellow banners saying "climate change starts here" that spread across the room. A second later, a girl interrupts the speaker and starts to announce: "This is the state of climate emergency! For reducing the catastrophic changes of the climate, ..." Now, in New York or Frankfurt, they would become the most important people in the room and everyone would immediately be their servant because the West's contemporary shareholders seem to be spineless effeminate cowards. Thankfully, Czechia is still a bit different.

Around 0:30, an official says "if some non-shareholder personnel are present, I urge them to be removed from this room". "Are you shareholders, please?" – No clear answer – "So I declare a pause up to the moment when it becomes possible to clean this hall."

Meanwhile, the somewhat shy Greenpeace girl in the glasses and white clothes continues to read her tirade against the coal power plants. Many shareholders scream "Out!" (Ven!). After various intonations of "Out!", the shareholders also switch to "Phew!" (Fuj!). They repeat various slogans above. One shareholder observes: "The television will have something to broadcast again, won't it?" Another one says: "They're only creating a brothel [disorder or mess]."

Around 3:30, the first active rank-and-file shareholder voices another demand: "Put them into a prison!". The guards seem to have suits and they're rather slow. Meanwhile, you can see that some verbal arguments are actually ignited elsewhere and the shareholders seem to have much more to say about why the green ideology is a brothel than what the brainwashed Greenpeace girls could ever offer.

Finally, at 4:00 or so, the non-shareholder is finally grabbed by her shoulders and the guards are shown which doors she should be kicked out through. My understanding is that this non-shareholder who is expelled isn't Czech, despite her banner in Czech – she wants to talk in English. Three girls patiently stand with their banner "stop the sale of the Počerady power plant".

The first shareholder producing gems adds: "You have shown yourself in a nice light again!"

At 4:40, a semi-professional green male narrator starts to explain that we're on a shareholders' meeting. The minority shareholders' proposal to discuss the sale of the Počerady plant was rejected again. It's the most polluting operational power plant in Czechia right now, having 1000 MW, producing 5.5 million tons of greenhouse gases (CO2) a year – the largest single source in Czechia. It's also the greatest source of mercury. If Počerady is sold and Tykač continues to run it for decades, Czechia will have no chance to fulfill its climatic commitments, the narrator argues. He claims that the sale directly conflicts with the state's energy policy that has been approved. The sale could take place even if the Czech state, the 60% shareholder, didn't want it. Greenpeace wants to shut the plant down – the oldest parts of the plant are 50 years old.

It's the warmest day in a "far and broad" recent past, we're learning from him. ČEZ shouldn't have shareholders' meetings on the warmest day of the month, I would recommend to Beneš (as a shareholder who didn't attend)! And it's warmer and warmer because we emit greenhouse gases, he says. Sure.

Aside from CO2 and mercury, Počerady emits sulfur oxides and causes health problems etc. not only to Czechs but also to foreigners, the narrator says. Minority shareholders led by Michal Šnobr question the economic value of the sale. Oops, Šnobr isn't just a stunt, he owns around 1% of ČEZ. This almost sounds as if he were green. How could a sale be an economically worse solution than the demolition? Šnobr is reported to say that the site is extremely valuable. (I don't believe this for a second, it's hard to find an economically better way to exploit the piece of land than an intense power plant.)

The narrator predicts that Tykač would like to expand the power plant further and run it for a long time. Chvaletice, another plant he has already bought, is telling us something about his plans. The narrator claims that the filters he installed in Chvaletice are of low quality. The narrator urges the viewers to join a protest against the sale - through a website with a stinky name. The people who don't like the sale should also harass the CEO Beneš on Twitter. The protest was supported by former left-wing Czech prime ministers Pithart and Špidla, by various scientists and physicians, and other personalities. Right. By some green Prague Café.

Some data are repeated by the narrator for the viewers who came late – the video was originally aired live.

A shareholder tells them: "It seems that you didn't succeed, kind of." Around 14:00, it seems likely that even the three girls who are shareholders are actually foreigners. Greenpeace imports demonstrators to its Czech stunts! ;-) One of the girls starts to be annoyed that all the other people consider her an animal in a zoo and they're taking pictures of hers for that reason. Well, but that's the completely adequate reaction because they really are on par with exotic animals.

Anti-green shareholders seem to be in a good mood and laugh.

ČEZ would have to revise the sale plans before the end of 2019, otherwise the sale will be made. The video is over, 16 minutes wasn't enough to clean the hall. On the other hand, you can see that these green activists weren't taken seriously by anyone who mattered.

By the way, there exists a straightforward kosher method for Greenpeace to shut down the plant. Offer a greater amount of money to ČEZ than what Tykač offers, buy the plant from ČEZ, and shut it down! That's exactly the only legitimate way for the green activists to realize their dreams about the reduction of greenhouse gases.
Luboš Motl v 2:55 PM
Share