Second Bell's theorem and the irrational cult around it

Off-topic, climate bragging: Steve Koonin is an NYU physics professor and a high-tier DOE official under Obama who proposed to introduce "the red team, the blue team" to the climate debate. I successfully urged him to respond to Gavin Schmidt's attack against a Koonin's talk at Purdue University – attack posted at RealClimate.ORG – and made sure he knew the address to submit it to the Anthony Watts' blog where it became the most successful text in quite some time.

Five days ago, I reviewed Bell's theorem. Two spins that are entangled – in a singlet state – produce a simple correlation \(\langle \sigma_a \sigma'_b\rangle=-\cos\vartheta_{a,b}\) between the measurements of projections of the two spins along axes \(\hat a,\hat b\), respectively. This nice and simple quantum mechanical prediction cannot be reproduced by a local classical theory (even with hidden variables) because such a local classical theory implies inequalities for correlations involving three axes that the (experimentally verified) cosines do not obey. 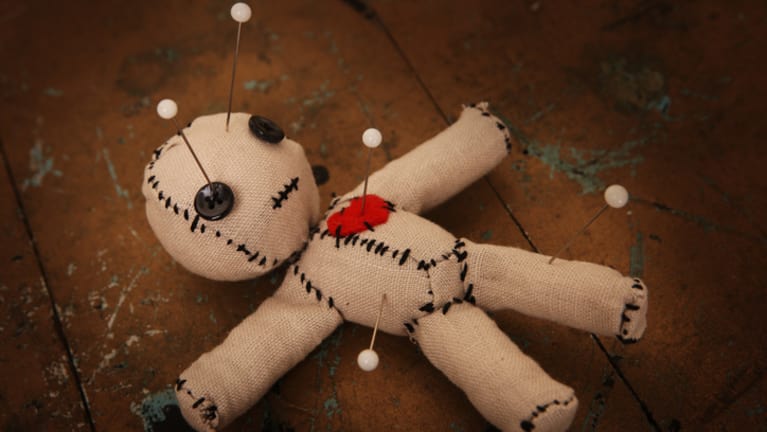 A voodoo doll. Anti-quantum zealots believe that quantum mechanics must enable some magic action-at-a-distance (and break Einstein's relativity, at least in principle) but it doesn't.

My blog post was a polished, more effective version of a 1964 paper by Bell. That paper made some sense, Bell has proven an actual result that was somewhat analogous to no-go theorems banning hidden variables. In fact, it was technically a more correct paper than John von Neumann's theorem on the same topic from the 1930s.

Although he wasn't terribly clear, it was implicit in the 1964 paper that the class of theories that was ruled out was composed of theories that were (1) classical theories with hidden variables that simultaneously (2) interacted locally.

But John Bell continued to write... and drift towards the confusion and ideologically motivated stupidity. So the misinterpreters of quantum mechanics love to say that he's proven not one Bell's theorem but two Bell's theorems. The second theorem was described in a 1976 paper "The Theory of Local Beables" – although my CERN version of that preprint was already written in 1975.

In this later paper, Bell coined the new terms "local beables" and "local causality" which have turned his writing into complete mess combining outright wrong statements with totally illogical definitions. He also tried to retroactively rewrite what he did in 1964. While in 1964, as I said, he was rather clear that he made two main assumptions about the theory, namely that it is local and it is classical (although he wasn't a sufficiently clearly thinking physicist to actually use the word "classical"), in the 1976 paper, he already tried to claim that he had only made one assumption, "local causality".

Eric Cavalcanti was trying to repeatedly push the slogan "local causality is important, violated by quantum mechanics, and it's a big deal" so I had to blacklist him according to the rules as an obnoxious troll who wants to spread wrong views by permanent repetition. But it wasn't just four or five comments where he writes all this junk. If you open Google Scholar, you will see that he has actually written tons of papers about this "local causality" stuff. All the papers are wrong and they're being referred to by very similar papers by other writers who are totally clueless about the actual rules of quantum mechanics.

In many previous blog posts, I explained that the entanglement experiments don't show any nonlocality and don't depend on any nonlocality. In a non-relativistic formalism, the faraway subsystems are typically described by tensor factors of the Hilbert space – so the full Hilbert space is a tensor product of the subsystems' spaces – and the Hamiltonian is close to the sum of the Hamiltonian for two parts which means that the subsystems evolve independently and locally.

In relativistic quantum field theory, the full Hilbert space isn't constructed as a tensor product but it is approximately a tensor product if only excitations in two separated regions A,B are allowed. More generally, the operators in the region A have vanishing (graded) commutators with the operators in a spacelike-separated region B. The word "graded" means that you should use anticommutators if both fields are Grassmannian i.e. fermionic. The vanishing of the commutators is what guarantees the independence of the evolution of objects in faraway regions.

There only exists one physically meaningful notion of locality or local causality – and it's what holds whenever the special theory of relativity (or its Lorentz invariance) is correct. The probabilities of measurements done purely in region A are determined by the prehistory of A – and don't depend on further data in the region B although it may contain objects previously in contact with the objects in A. There may exist correlations between measurements in A and B but all of those are calculable from the conditions in the past when A,B were a part of a single system AB. What's important is that people's decisions (e.g. what to measure), nuclear explosions, and other random events in region B don't cause changes to the system A.

The 1976 paper by Bell – and the cult around this wrong paper that has grown into a whole industry of pseudoscientists who try to turn physics into one of the humanities if not grievance studies – has tried to obscure all these things. So you may see Bell saying that the conventional "locality is not important". It should be downgraded and he renamed it to "signal locality" (clearly, only members of that cult respect this silly renaming). He not only tried to give an awkward name to locality; he also tried to say it's not important and something else, "Bell locality", is more important – and violated in any quantum mechanical theories.

All these statements are absolute rubbish. Every competent particle physicist sees this fact clearly. Every good atomic, molecular, nuclear, or condensed matter physicist or optic sees it, too. What the special theory of relativity guarantees – by its nontrivial Lorentz invariance – is locality or the local version of causality. It's the thing that Bell called "signal locality" - "signal locality" is the only physically meaningful locality-like conditions because signals (influences) are what actually determines the character of causation and causality according to any physicist. Outcomes at point P are only affected by the data in its past light cone, not by the past of the whole Universe. This locality or local causality holds because of relativity – and that's a great insight and the main reason why we actually consider Einstein a very important physicist. Other things that someone may imagine to understand physics may "look" nonlocal (e.g. the sudden collapse of a wave function for 2 particles in a reference frame) but they are not physics. If someone is imagining something while doing a calculation and this something is nonlocal, it doesn't prove that the theory is actually making nonlocal predictions – because the person is adding something unphysical to the theory!

If some "term that has locality in its name" is violated by quantum field theory, then this term is absolutely silly. Confused people often say that entanglement makes quantum mechanics nonlocal – but the only reason is that there exist faraway objects that are correlated. But those existed in local classical theories, too! Needless to say, Bell – a full-blown anti-quantum zealot by 1976 – deliberately incorporated the assumption that the world follows classical physics into all his terms so that his stupid readers – such as all the "researchers" writing Bell-style junk papers even in 2019 – don't even dare to think about thinking outside the classical box!

So a theory is "locally causal" only if it is classical. Needless to say, no viable state-of-the-art theory has been classical since 1925, so it cannot be "locally causal" according to Bell's silly definition. But is this conclusion really logically correct? Let's look at page 3 of the 1976 paper a bit more carefully. Here is his definition of [Bell's] local causality:

\] whenever both probabilities are given by the theory.

But the actual definition above doesn't demand the theory to be classical. Instead, it only requires the independence of the values of beables on some other beables. This independence has to hold for all beables with some properties. Is the condition obeyed by the Standard Model?

People who talk about "beables" in quantum mechanics are doing an equally silly mistake as an evolutionary biologist or a molecular geneticist who builds his science on the seven days of creation. Life wasn't created by a Creator in seven days according to the evolution theory or genetics; and analogously, observables that can be measured within quantum mechanics aren't expressed by beables or \(c\)-number-valued functions of time. Too bad, the people incapable of getting these complete basics have created a whole would-be field that they market as a branch of physics although it is really a branch of moronic grievance studies.

Incidentally, if you carefully fixed the silly features of Bell's definition of "local causality" – you would erase the requirement that the observables are "beables" etc. – you would get a definition that would be equally obeyed by local classical field theories as well as the local quantum field theories. If you allow the observable \(A\) to be determined by Bayesian inference, then of course results of measurements done in the faraway region \(B\) may be relevant for determining the value of \(A\) once it's measured. That boils down to the fact that outcomes measured in region \(B\) are also affected by the joint prehistory in \(AB\), so they may be relevant for Bayesian inference. But this influence of Bayesian inference doesn't mean that the region \(B\) influences the region \(A\) now! Instead, all these predictions for the region \(A\) now may be reduced to the properties of the system \(AB\) in the past that contained both the predecessors of \(A\) and the predecessor of \(B\). By reverse inference, recent observations in \(B\) determine some properties of the joint system \(AB\) in the past which means that they also affect our expectations about the recent outcomes we will get in \(A\).

All these statements are exactly equally true in classical and quantum mechanical theories! So strictly speaking, with the definition that talks about observables and not beables, no theory – neither classical theory nor quantum mechanical theory – would be "locally causal" according to that fixed definition – simply because that definition of "local causality" prohibits Bayesian or logical inference of properties of \(A\) now from \(B\) now that is affected by \(AB\) in the past. There's no real difference between classical and quantum physics here. The psychological would-be difference is that in a classical theory, the measurement done later in \(B\) may be identified with an observable that already existed in \(AB\), before \(A\) and \(B\) separated. But if you think carefully, this statement is true in quantum mechanics, too! The observables measured later in \(B\) have also Heisenberg-evolved from some operators that used to act on the joint system \(AB\) in the past, too! The only difference is that the measurements always matter in quantum mechanics – if that predecessor-of-an-observable were measured in \(AB\), that would have changed the experiment. But there's no reason to demand that the observable in \(AB\) had to be measured – it isn't really being measured in the classical situation, either. What matters is that the observable mathematically existed.