Christopher Booker died of cancer today at 2 am, aged 81. He was a British journalist who primarily wrote to the Sunday Telegraph – from 1961 (!) up to March 2019 when he retired for health reasons.

His last column was partly composed of memories, partly of pessimism about Britain and the West. 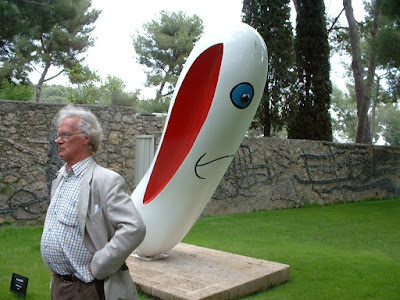 His main topic was the climate panic – he was an excellent, fair climate skeptic. But he also enjoyed writing about religion, butterflies, and architecture.

The reason why I write about it is that I had the pleasure to befriend him, well, for a week, at the 2010 retreat in the French Riviera. Maybe the FinePix picture above – from the Musée d'Art Moderne Et d'Art Contemporain in Nice, I guess – isn't the most flattering but it's authentic and I took it. It may be the most relaxed or personal picture of him you may find on the web.

He was a classic English Gentleman and a kind storyteller with lots of the English humor. He has been to many places and he could talk about many things – including my homeland.

When folks like him are being subtracted while things like Gretenism is reproducing as quickly as Candida Albicans, it's not hard to see how the Roman civilization could have declined in a few centuries – ours can do it in a few decades.