Yesterday, Trump finally said what he thought about the cryptocurrencies. And although a big Bitcoin cultist Peter Thiel has been his adviser, it turned out that Trump's views are very close to mine (and other pundits in the conventional financial markets).

Meanwhile, the true Bitcoin cultists celebrated the following criticism because they love to imagine they are a credible foe to the likes of Donald Trump – a reason why I consider the Bitcoin cult to be just another part of the postmodern leftist movement.

I am not a fan of Bitcoin and other Cryptocurrencies, which are not money, and whose value is highly volatile and based on thin air. Unregulated Crypto Assets can facilitate unlawful behavior, including drug trade and other illegal activity....

As the zeroth approximation, it's just right. With no backing, material or hard commitments, Bitcoin-like cryptocurrencies aren't money. That's nearly equivalent to their high volatility. Aside from the Ponzi-scheme-like lottery, the only good application is the criminal one.

He also added remarks about the planned Facebook cryptocurrency, Libra – which is the word for a pound, both the British currency and the unit of weight, in Latin (and also in Czech):

...and International. We have only one real currency in the USA, and it is stronger than ever, both dependable and reliable. It is by far the most dominant currency anywhere in the World, and it will always stay that way. It is called the United States Dollar!

This was the second and third part.

Yup. I think that the assumption that Facebook could be or should be allowed to run its alternative currency is way too fast. Supporters of the cryptocurrencies clearly assume that by using a slightly different method to remember the current account balances, the cryptocurrencies automatically have the permission to be anywhere.

It's bizarre. When I was in the U.S., I actually wanted to have an account in the Czech crowns in a U.S. bank. It just wasn't possible. It wasn't legal, I think. The U.S. insisted on the usage of the U.S. dollar as the money and its almost monopoly.

Now, why should a non-financial company be allowed to have its currency if an allied country with solid finances can't? It doesn't make much sense. Technicalities about the update of the database with account balances are secondary; everyone who thinks that these details matter is completely overlooking politics, economics, morality, and the legal systems. What is primary is that Facebook plans to turn itself into
In a civilized system, a company that plans to behave as a bank should be regulated as a bank. They need people with the expertise, degrees, experience, and integrity. They need the appropriate capital reserves. And they also need to prove that they have no relationship with the groups influencing politics etc.

Facebook has banned some totally law-abiding citizens – and even declared them "dangerous individuals". Laura Loomer has filed a $3 billion lawsuit against Facebook. She probably wants too much. But it's "just" some Facebook accounts and postings that are at stake so far. Imagine that the currency becomes successful and perhaps "de facto necessary" to get certain new products or services. People will have to have it. But Facebook will be capable of confiscating the funds of any inconvenient individuals. Internally, it may treat the Libra as a "children's money" so the elimination of your account could be a non-theft allowed by their terms of services.

It just shouldn't happen. The idea that a company whose policy decisions are demonstrably affected or controlled by some political extremists who don't hesitate to harm other people because of their political opinion is scary enough.

But even if you ignore the problem with the pathological Big Tech companies' approach to politics, ideologies, and the freedom of speech, it is still wrong for a generic company to issue its currency. Not even commercial banks are allowed to do it, are they? Libra would probably be something like a Tether – but pegged to a basket of currencies. Why? Because issuing one's currency is something that only central banks may normally do – and there's a good reason for that. It's just too simple a method to create a profit. And if it were allowed, the law enforcement would become incapable of preventing theft at many places because there would be too many things to guard. 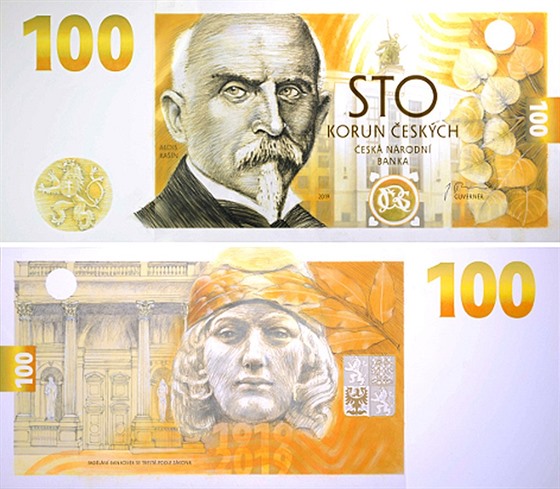 A simple exercise. Take a publisher that doesn't consider the existing banknotes pretty. So it just issues its own new CZK 100 banknotes which has a better color or perhaps a better design. Or a better shape. Or it's made of a better material. It says that it can always convert the CZK 100 banknotes in both directions, for no fee or a low fee, and this commitment will hold as long as the publisher or its successor exists. The picture above is a real banknote issued by the Czech National Bank to celebrate the 100th anniversary of Czechoslovakia – the guy is the first finance minister Alois Rašín – we normally use a different CZK 100 banknote.

OK, what are the implications and opportunities?

Lots of people would buy these new banknotes because they are still "worth CZK 100" and some companies could even start to accept them directly for payments if this became legal. The good news for the publisher is that it is extremely unlikely that all the Rašín banknotes in circulation would be demanded by their owners to be bought back by the publisher so that the real old-fashioned CZK 100 is returned to them.

Because of this low probability, just like in the case of the commercial banks, the publisher wouldn't have to back up all the new banknotes it has printed by some real money. It could afford the reserves to be lower – and use a part of the collected "real money" as the profit! The Bitfinex-linked people behind Tether, the cryptocurrency, are "accused" of doing exactly that. Now, like in banking in general, the question is "what are the sufficient reserves". It's a pretty good idea for banks to be regulated – to lower the probability that they will go bankrupt and cause further problems as soon as there is some financial anxiety in the markets.

But the normal banks are still using the same currencies that were issued by some central banks. The "Tether company" doesn't but at least it is a purely financial organization of a new kind. On the contrary, the publisher – and similarly Facebook with their Libra – is issuing something else and people may want it just because of the different design or the different (blockchain) software powering the database. This is why the publisher or Facebook could collect lots of money.

Facebook could be around for years or decades (and after that, some other company could inherit the commitments and credit) and there's no clear "risk for the system" in the Libra, you might say. But if Facebook were allowed to do it, every similar or literally every company should be allowed to do the same, right? Twitter coins, Microsoft Windows coins, Google Maps coins, and Infowars.com coins would be omnipresent. Old-fashioned banks would surely lose a part of the deposits that would be moved to these new de facto banks. The stability of the financial sector could decrease or dramatically decrease, at least temporarily, because some of these new de facto banks would surely have insufficiently sound policies or insufficient reserves etc.

I think it's right to have the banking regulation preventing these trends and it's right for the regulators to prevent Facebook from issuing this currency. There may be innovative ideas in banking as well but the added value of Facebook's would be mostly about the mixing of financial instruments with some discussions on social networks – and it is just a very dangerous combination because finances are important and Facebook could use them to blackmail and manipulate the people. If such an influence may be described as blackmail, it is illegal, at least according to the spirit of the law, but by the murky mixtures with the terms of services, Facebook could get away with lots of this blackmail.

Also, I think that Trump should initiate the regulation or abolition of Bitcoin and similar cryptocurrencies. Before he does so, he should announce it, tell all Americans to bet against the Bitcoin etc., and make a profit, and them make sure that these people actually make some profit. This would help him even in the elections if lots of prospective Democratic voters were also capable of listening to Trump and making a profit.

The Bitcoin price has increased again to over $11,000 by now. It's about 1/2 of the peak price in late 2017 and that one still seems very difficult to revisit but it's more than triple the annual minimum around $3,100. So some shortsellers have recorded huge losses – and, correspondingly, there is a lot of new potential for new shortsellers.

Tomorrow, on the Bastille Day 230 (July 14th), Czechia celebrates the 80th birthday of Karel Gott, a legendary singer – who recently became a cancer survivor. He was born here in Pilsen in 1939 (yes, exactly 150 years after the French Revolution started), in the Protectorate of Bohemia and Moravia, and was trained to be an electric plumber. But he got back to music at the right time so that he could win the Czech Nightingale for the best Czechoslovak or Czech singer over 40 times. See the blog post about him exactly 10 years ago.

Meanwhile, some 230 years after the Bastille Day, France has its own Pantheon Day. Pantheon has been occupied by a hybrid of Black Lives Matter and Occupy Wall Street that demands to stay in France forever. See a video filmed by a French camerawoman named Marine Le Pen who still expects that these illegal migrants should be deported.


Meanwhile, Germany plans a carbon tax of €25-50 per ton of CO2. This will increase the price of petrol, air tickets, and beef by 1/3 and the price of butter by 1/2. Merkel's predecessor Gerhard Schröder, although he was from SPD, was only dreaming about a Wettersteuer, and it was just a parody of the Chancellor who did it. Merkel not only dreams about it, she introduces the Weather Tax, and it's the real one with the Parkinson, not a rubber model of hers! The West has deteriorated terribly under the leadership of the likes of Merkel and Obama.
Luboš Motl v 7:46 AM
Share