...and other cool twists in education...

Many of us have agreed that undesirable trends in education lead to the decline of – and existential risks for – the civilization. It seems that kids are not learning the reasons why things are the way they are; they are not even led to ask the question "why"; when they learn something at all, it is usually some ideological clichés and/or ephemeral details that are bound to get obsolete very quickly.

The ideological clichés are too general and too sociological (and also wrong, in most cases); the ephemeral details are too localized. But the whole "foundations" or the "skeleton of knowledge" that can be reliably extended is somewhere in between when it comes to the generality – and it's largely suppressed at contemporary schools. 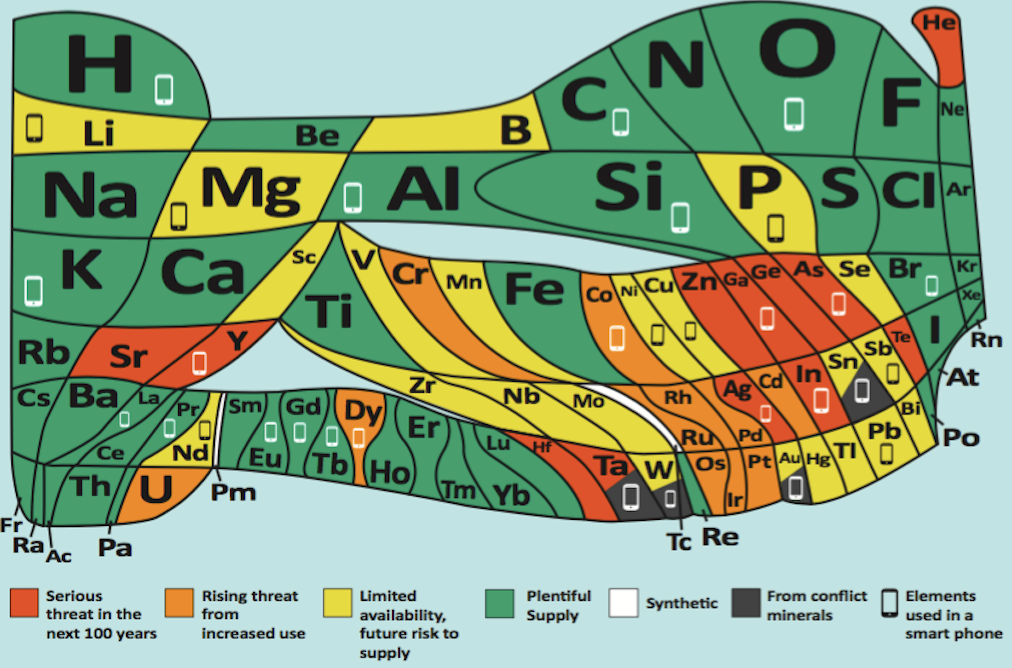 Elements according to their "endangered species" status

Many of these trends in education reflect the Zeitgeist. In fact, when I was a teenager, I may have wanted the education to be changed in this direction – maybe the pendulum has just swung too far in the direction we used to favor. At the high school, we were expected to memorize too many isolated facts – about organic compounds; novels and novelists, and more. I was – and, I assume, most kids were – overwhelmed by so many random things that didn't look relevant for us, that didn't have anything to do with us, that didn't inspire any emotional attachment of ours.

Also, most of the stuff we would learn seemed sterile and obsolete – we were apparently more interested in the "fashionable" things, in topics of our times.

Many years or decades later, I decided that lots of the "obsolete" or "sterile" things that used to annoy me – basically many things outside mathematics and physics ;-) – were very interesting. The history of the world, the history of my nation, evolution of species, some novels, various groups of organic compounds, plants, animals, and other things.

One thing that was typically missing in the education of my childhood – and, I think, in the education of the previous centuries – was an authentic excitement. Kids were slaves of a sort and they could have been forced to memorize things, whether they enjoyed it or not. It was good for the society – and possibly bad for the (naturally lazy) kids. But no one asked them. Kids weren't supposed to have the human rights. During Maria Theresa's reign (she introduced the mandatory schools in our empire), kids weren't getting PhDs and Nobel prizes for skipping the classes and becoming dropouts yet. Maria Theresa would probably not be impressed by the current Gr$tinist reform of the schools.

If you have some reason to care about things, you obviously learn much more happily. Here I am saying basically the same thing as the alternative pedagogues such as Mr Hejný. But yes, I do think that this much is obvious. For example, most of the Czech history may be rephrased as details you need to master to answer the question "should we actually like Germany?". Now, it's natural for many of us to care about this question – and by looking at the arguments, you may realize that most (but not all) of the history is really important for the answer. It's important for the questions "who we are" and "where we should be going".

Then there are lots of things of the type "why are things the way they are". People like your humble correspondent – and probably most of you – were naturally curious about such things. You may reorganize much of the material as parts of the answer. Kids could be taught "historical subjects" anti-chronologically. Why do we have a capitalist republic now? Because we did something in 1989. Why was there communism before that? It was because of something else... And why...? Because of the Big Bang, and so on (maybe). They could be gradually led to understand the ever deeper reasons for the facts they see in our world.

So I do think that it is right to make the learning exciting – so that it revolves around some questions that kids may naturally be intrigued by. The problem is that this attention paid to the kids' comfort has gotten way too far. Kids don't want to memorize anything – so these days, they don't have to. They want to learn a new version of geology in which the Earth will evaporate in 12 years – so they will get this new official truth, too. Maybe some motivation to care about the kids' happiness – and to protect their buttocks from bruises – was right but the change has gone too far.

Similarly, as I previously wrote, we wanted the material to be "more up-to-date", more related with the life and fashions of the same year. And this change of the schools' focus has indeed taken place. Again, it has gone too far – and it's why the kids are learning too ephemeral things that will get obsolete or irrelevant within a year or two. How do you enable CSS through the new version of JavaScript? Kids just don't understand the normal world as it existed 50 or more years ago – approximately before the era of the political correctness. For them, the birth of the political correctness is the Big Bang. There was no history before that – or the pre-history is just something that must be criticized and summarized as Hell.

Another general problem that has always plagued the official dry education – and it still plagues the present neo-Marxist education – is some kind of "egalitarianism of facts". In chemistry, to pick an example, kids are learning e.g. about lots of liquids. Dozens of acids are almost literally poured into their heads. ;-) But some compounds are way more important than others, right? For example, water is probably more important for us than all other liquids (at room temperature) combined. It should get much more attention for that reason. And it should be explained in some way why it's water that happens to be the queen of liquids. The visibility of various topics should increase with their importance.

And there should always be some classification that assures the kids that the "number of things they need to learn to master something" is basically finite – and a classification that starts from the simplest things. For example, the number of organic compounds is infinite – but even the very real ones that are discussed by chemists seems to be huge (millions). The high number boils down to the carbon atom's "four legs" which allows you to create lots of structures. But order may be brought into the mess if you start to present it systematically.

You may explain that carbons are the root of the organic compounds. You may create chains out of them, and always "satisfy" an extra leg of a carbon atom by a hydrogen, a small atom. Sometimes you may add oxygen, the simplest relevant element with two legs (again, kids should really know why it's so and why oxygen is a top three element in the organic compounds), and the OH group. Much of the classification of the organic compounds – starting from the simplest – is a graph theory problem of a sort. Simple chains are alkanes – methane, ethane, propane, butane, brontosaurus, orangutane. ;-) You may replace H with OH – an insertion of an oxygen somewhere is possible because, again, oxygen has two legs, just the right number for an extension cord. You get alcohols and sugars (with even more oxygen atoms – where you approximately have hydrogens plus multiples of H2O), among other things. The longer chains you consider, the less important they generally become.

The number of facts from many subjects that the kids should learn is still high. I think that we're seeing signs of the problem that no one or almost no one will know certain things. For example, 99.999% of the today's kids want to become YouTubers (instead of astronauts like 50 years ago) and you may be worried that the number of bakers won't be enough to feed all the YouTubers. ;-) This must be prevented. And as I indicated in the title, there is a nice fix: kids may memorize just a fraction of things, according to their identity. In many cases, the facts just don't depend on each other and when you cut the material to a fraction, it doesn't lose the logic.

The simplest example: the acid is feminine (at least in Czech) while the hydroxide is masculine. So girls would learn acids properly while boys would learn hydroxides. Sometimes you would learn much less than 1/2 of the stuff. Some detailed properties of the elements of the periodic table could be taught to kids of the right column only. The column (or the row at the bottom) would be assigned to you according to the month of your birth; or the day of your birth within the week. So if you were born on Wednesday, like I was, you would learn something about C-Si-Ge-Sn-Pb. Other kids would learn other parts of the stuff.

You could be expected to learn the novelists who were born in the same month as you (or the same day-of-the-month, if an even smaller fraction is enough), and so on.

In this general way, you could reduce the amount of stuff that is being pumped to each kid to a tolerable amount – and they could learn these things more thoroughly. The kids could collectively acquire a new identity in which they would be proud about certain things they had to learn properly. At the same time, the new generations would collectively know everything they need to know.

What do you think about these proposals and what are your principles how to improve the education?
Luboš Motl v 6:43 PM
Share