According to a popular conspiracy theory, long-lived condensation trails behind airplanes are chemtrails whose longevity is enhanced by the addition of some special compounds. The governments are adding these chemicals to harm the population or make it obedient or something like that. 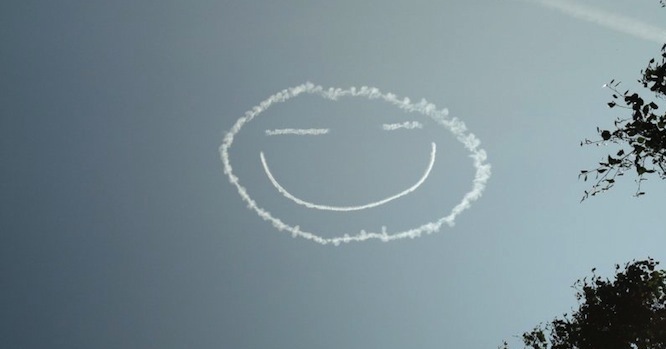 Most of the believers are probably considered "right wing nut jobs". Why would you get obsessed with the innocent "man-made clouds" whose main component is clearly partly condensed water vapor? Well, not all of them are right-wing. A month ago, Atmospheric Chemistry and Physics published a paper by two ladies


whose clear purpose is to give the pop-science alarmist inkspillers something slightly new to write about – and to make the writers more visible. And be sure that it works. At Yale, Fred Pearce has quickly promoted the preprint. All climate alarmists – including the Gretenist cult – should be worried about the chemtrails, too!

Now, the condensation trails (contrails) may be considered artificial cirrus clouds. Those are clouds between 5 and 15 kilometers or altitude that have thin or wispy strands.

Low-lying clouds are generally cooling the Earth – when it's cloudy, the weather is bad. But cirrus clouds are located at higher altitudes and their net effect on temperature is believed to be a warming one (much like the "water vapor as a greenhouse gas").

So you may just pick an estimate how much the cirrus clouds warm the planet, how many of the cirrus clouds is man-made (from airplanes), and you get your estimates how much the contrails are adding to the "global warming". The paper doesn't contain much more than that. To make it spicier, they "assume" that the contrails will triple in some future. This assumption has the nice effect of approximately tripling the contrail warming, too. Needless to say, all these numbers are plagued by huge uncertainties. As far as I am concerned, even the sign of the artificial cirrus clouds' warming is uncertain.

Even the – seemingly overstated – tripled amount only gives them the estimate of 0.1 °C of warming contributed by these trails, probably by 2050 – their formulations are never too clear. So without the tripling, they believe that contrails will probably add some 0.03 °C by 2050. Clearly, this contribution is one of hundreds of contributions comparable to "hundredths of a degree" – it is indistinguishable from the noise. A reasonable person would see these estimates as a way to prove that it's utterly silly to worry about the changes of the temperature by hundredths of a degree per decades – because even ludicrously unimportant effects contribute this much.

You know, the fuels for the airplane do involve some nontrivial chemistry. It's possible that something is being added there. And it's some "big guys" who can affect and hide similar additions and they may know what they're doing. They probably have various goals that generally differ from the goals of an average Joe. At some level, the chemtrail conspiracy theory is plausible. And if they observe some contrails that seem to linger – that are more long-lived than the old contrails – maybe they can even claim some empirical evidence for their theory. If there's something that reduces the sex drive or makes the people more obedient, it is something that you should know.

On the other hand, the climate alarmists want you to believe that you should be worried about some contribution from these man-made clouds that could be 0.03 °C or 0.1 °C per half a century – a contribution to the temperature on each place of the planet. They clearly want you to believe that similar considerations should shape people's opinions about the airplanes in general and their own flying habits. Just imagine how crazy it is. Even if the contribution were 0.1 °C from that tripled contrail production, it's an undetectable temperature change – by a human – even if you perform the change it immediately. Now, dilute this change to more than 30 years and embed it to a frantically oscillating temperature that is a function of both spatial and temporal coordinates. No sane person can believe it is important.

So the chemtrail conspiracy theorists are "right-wing" in the sense that they believe that the government is doing something nefarious. The contrail global warming believers are mostly "left-wing" because they probably believe that the government may save the world – by removing the 0.03 °C or 0.1 °C of warming, probably by suppressing or banning the air traffic. Both groups have some ideological considerations – a prejudiced, oversimplified attitude to the government – that they place above their common sense and above any scientific or calm evaluation of the problems.

Still, the right-wing nut jobs have at least something that could plausibly be important. The left-wing ones have nothing of the sort. They're a bunch of mentally ill hysterical losers and overgrown Gretas who are terrified by any infinitesimal change, even if it really is practically indistinguishable from zero. People with the tin foil hats are somewhat crazy but they must be expected to be wiser managers of the resources and the economies than the climate alarmists.