A woman is the first astronaut with an achievement

Bad news are everywhere. I sort of follow the increasing harassment of all the people who aren't convenient for the self-confident would-be totalitarian ideologies of the present because it has naturally become "my topic" but even if I didn't follow those things, the number of them that I would be exposed to would be huge. 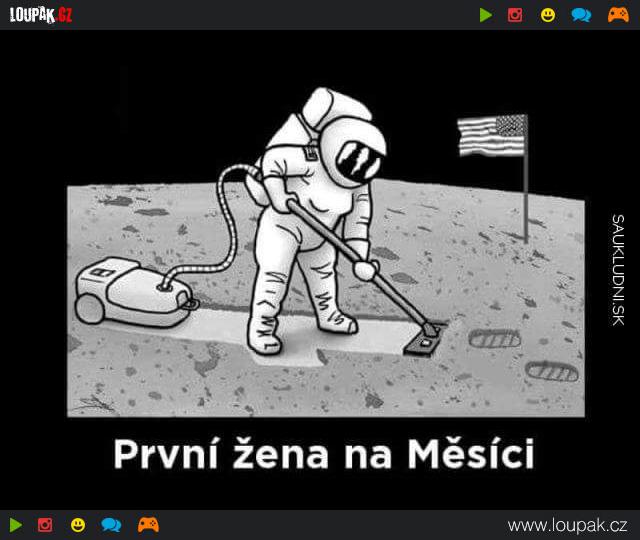 The first woman on the Moon

That's why it's such a good idea to watch or listen some sources that want to keep you relaxed. Hit Radio FM Plus is pretty good in this respect these days. The jokes aren't terribly intellectual in most cases but they're just good as a relaxed entertainment.

Minutes ago, we learned some relaxing, basically good news – that a female astronaut has just achieved something that no man has ever done before. Anne McClain is the first human being credibly investigated for a... crime committed in outer space.

If this were your task, how would you do that? Try to solve this problem. Could you find a supermarket on the orbit if you wanted to steal a chocolate? Does Lidl operate outside the Earth's surface? Would you find the rope on the ISS if you want to choke somebody? Wouldn't the spacesuit prevent you from completing that task? It's really not that easy!

Of course, it would be an easy task for your humble correspondent – I would ignore chocolates and ropes and my strategy would revolve around the free speech that others might find criminal.

Neil Armstrong and Buzz Aldrin didn't achieve much. They just piloted a stupid capsule in order to... walk on the Moon. Walking is a nice skill but as most babies who read this blog may confirm, most babies learn to walk between 9 and 17 months of age – if your kid fits somewhere to this interval, you shouldn't get hysterical. Have Armstrong and Aldrin done much beyond that? Hundreds of billions of dollars for a walk?

A crime is a much more sophisticated activity that requires some independent thinking and bold acts – a small step for a woman, a huge leap for womxnkind. The achievement is doubly pleasing for the progressives because the heroine wasn't just female. She is Lesbian.

How did she manage to be investigated for crime in space? After a bitter divorce with her estranged "wife", McClain still accessed the ex-wife's banking account. She admits it was the case – and her defense is that no one has told her that she should stop using the other woman's banking account. You may see that it's a subtle puzzle for lawyers to decide whether two women who have parted their ways and who hate each other may use the banking accounts of one another. The astronaut's lawyer might argue (my idea) that it's the fault of the Earth-bound "wife" that she hasn't changed all the passwords needed for access, to protect the account from the astrob*tch.

At any rate, congratulations to the astronaut and to the feminist movement. These congratulations may sound comical but there's some sense in which I am serious. Feminists love to pick the men's achievements that normally make men and women do "wow", that naturally attract respect and the desire of other people to "be like them".

First woman on the Moon: Houston, we have a problem. – What is it? – Nothing, let it be. – What happened? – Nothing, whatever. – Please tell me. – No. [...] In many other nations, joking about even remotely topics is taboo. In Czechia, you get a whole category of jokes on topics such as "the first woman on the Moon". We also have a 5-episode "Kosmo" TV sitcom on the topic of the First Slavs on the Moon.

On the other hand, men also hugely beat women in activities that aren't this attractive: in war-related deaths, in deaths caused by mining and other dirty jobs, and even in deaths by a lightning (ten-to-one: which is mostly due to men's higher time spent by working outside). And yes, men are surely more achieved in many types of criminal activities, especially those that require some nontrivial planning, extra physical force, or some unusual position which is needed to realize the crime. For every Elizabeth Holmes, you still find a dozen of Bernard Madoffs. What these people have done is "really bad" – but it also depends on some skills and potential that don't differ much from the skills needed to do some "really good" things. For this reason, the two cases of underrepresentation of women, in theoretical physics and crime, are largely inseparable.

If feminists and LGBT activists really want to make the body of men and women statistically indistinguishable (or to make the same with the people of different sexual orientations, even when it comes to their "roles in families"), which the rest of us considers to be a complete insanity denying the basic facts about Nature, they should also celebrate this woman's priority status in crime in space. In this sense – a sense that depends on taking a part of feminism or LGBTism seriously – my congratulations are completely sincere.

Grandpa, why is this called The Grandpa's Watch? – I don't have the slightest idea.
Luboš Motl v 10:19 AM
Share