A few days ago, the World Science Festival of Brian Greene posted a 90-minute video with interviews about the state of fundamental physics:

Bill Zajc sent it to me and I finally had the time and energy to watch it, at a doubled speed. At the beginning, four minutes of Greene and visual tricks – similar to those from his PBS TV shows – are shown. I actually think that some of the tricks are new and even cooler than they used to be. I really liked the segment where Greene was grabbing and magnifying the molecules and taking the atoms, nuclei, and strings out of them. The illustrations of the microscopic building blocks had to be created to match the motion of Greene's hands.

Greene had three guests whom he interviewed separately, in 30-minute segments: Marcelo Gleiser who spoke like a historian and philosopher; Michael Dine who covered the search for supersymmetry etc.; and Andrew Strominger who amusingly discussed the exciting quantum gravity twists of the reductionist stringy program.

I know Dine and Strominger very well – not only as co-authors of papers. I have never met Gleiser. Some Brazilian commenters mention he is unknown in Brazil but he should be famous, partly because he is a DILF – I suppose it meant a Daddy [He or She] would Like to Fudge. Gleiser and Greene discuss the history of unification and a model of expanding knowledge (an island) which also expands the ignorance (the boundary between the known island and the unknown sea). I thought that David Gross insisted that it was his metaphor but OK.

Michael Dine has been a phenomenologist but he bragged that he was one of the few who were cautiously saying that SUSY may remain undiscovered after a few years ;-). I don't really think that this skepticism was rare (my 2007 predictions said that the probability for the LHC SUSY discovery was 50% and I think it agreed with what people were saying).

The real issue is that when you're skeptical about discoveries around the corner, you don't write papers about it – because you really don't think that you have anything interesting to write about. That's why the literature about this topic is naturally dominated by the people who did expect speedy discoveries of SUSY. But the actual percentage of the HEP people who expected speedy discoveries of BSM physics wasn't much higher than 1/2 and maybe it was lower than 1/2. The skeptics avoided writing useless and unmotivated papers and I think it's the right thing to do. One must just be careful not to misinterpret the composition of the literature as the quantification of some collective belief – but it's the interpreter's fault if this invalid interpretation of the composition of the papers is made.

OK, so Greene said that 90% of Dine's work may be wrong or useless and Dine roughly agreed.

Andy Strominger (whose 94-year-old father just got a new 5-year early career grant) pumped quite a different level of excitement into the festival. The research turned out to be much more exciting than what people expected. People expected some reductionist walk towards shorter distances and higher energies, they would finally find the final stringy constituents, strings, and that would be the end of it. Physics departments would shut their doors and Brian Greene would pour champagne on his festivals, or something like that, Andy said. ;-)

What happened was something else. People found the black holes, their puzzling quantum gravity behavior, holography, connections with superconductors and lots of other things. This is better than just "some final particles inside quarks". I agree with that. Strominger's metaphor involves Columbus. You can see that Andy is not quite the extreme progressive left – because those wouldn't dare to speak about the imperialist villain Columbus without trashing him.

OK, Columbus promised to get to China. Instead, he discovered America. Some of his sponsors were disappointed that he only discovered some America and not China. These days, people may be happy because America is better than China. Andy forgot to describe the future evaluation. Maybe, in a century or so from now, people will be disappointed again that Columbus found just America and not China because China may be better. But it could be good news for Andy (he's at least impartial) – who has spent quite some time in China and who actually speaks Chinese.

While Dine predicted that the field would shrink, Strominger's description implicitly says that the field is growing. I agree with Andy – but a part of the difference is that Andy and Michael don't have quite the same field. Dine is a phenomenologist and the contact with the experiment is almost a defining condition of his field or subfield. Strominger is a formal theorist so he can do great advances independently of experimental tests.

It would be a surprise for the people in 1985 if they saw how the string theory research has evolved. In 1985, Witten expected that in a few weeks, the right compactification would be found and that would be the end of physics. Instead, all the complex branches of knowledge were found. With hindsight, it's almost obvious that what has happened had to happen. The one-direction reductionist approach works well but only up to the Planck scale.

There are no sub-Planckian, physically distinguishable distances. So it should have been clear, even in advance, that the one-direction journey had to become impossible or multi-directional once the true phenomena near the fundamental scale are probed. And that's what happened. Most of the stringy quantum gravity research makes it very clear that it's not a part of quantum field theory that respects the one-directional quantum field theory renormalization flows. All phenomena are "equally fundamental" at the Planck scale, there is no clear explanatory direction over there anymore. People unavoidably study effects at distances that no longer shrink (you shouldn't shrink beneath the Planck length) and they study increasingly complex behavior (starting with the entanglement) of the building blocks that are roughly Planckian in size.

A viewer who has observed the exchange carefully could have seen some additional, funny subtle differences between Greene and Strominger. Greene wanted to introduce black hole thermodynamics with stories worshiping John Wheeler. It was all about Wheeler and... about his student Jacob Bekenstein. Meanwhile, Andy Strominger responded by completely ignoring this thread and talking about his late friend Hawking only. Strominger told us that Hawking had a tomb with the Bekenstein-Hawking entropy on it. 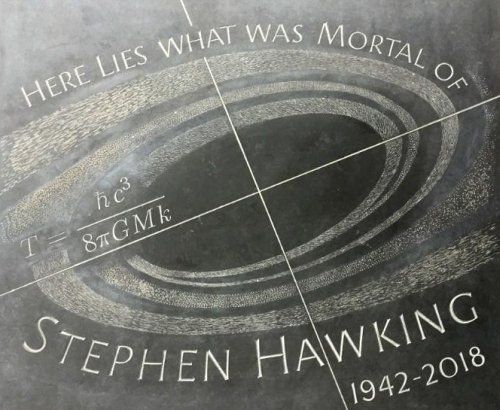 Well, Andy has conflated Boltzmann's and Hawking's tomb. Boltzmann has \(S=k\cdot \log W\) over there but Hawking has the temperature formula\[

\] on his grave, along with "here lies what was mortal of Stephen Hawking, 1842-2018", indicating that most of Stephen Hawking is immortal and eternal. I just wanted to return some rigor to the discussion of graves here, Andy.

All the guests turned out to be amusing narrators but it's pretty funny that Andy Strominger ended up as the most bullish and enthusiastic guest. Why? Fifteen years ago, Andy was invited to record some monologues for the PBS NOVA TV shows of Brian Greene, much like Cumrun Vafa and others. Vafa was totally excited about the TV tricks. They made his head explode! He watched it with his two sons, and when Vafa's and Bugs Bunny's heads exploded, all three boys were happy.

(Vafa has 2 sons, Strominger has 4 daughters. If this perfect correlation were the rule in Israel and Iran, you could be optimistic about the fudging happy end of the conflict of the two countries LOL.)

On the other hand, those 15 years ago, Andy Strominger was less enthusiastic because all his clips were removed from the show. Maverick Strominger's comments were insufficiently enthusiastic for Greene's simple, pre-determined, bullish tone. So now, when maverick Strominger is the cheerleader-in-chief, you may be pretty sure that most people speak rather negatively and pump lots of the disillusion into the discourse.
Luboš Motl v 2:30 PM
Share