Indian plan to reintegrate Jammu and Kashmir should be respected

Most of us consider India and Pakistan to be the third world and that limits the attention paid to these countries (Škoda Octavia easily became an Indian bestseller in its category by selling just 196 units in all of India last month!). However, they are the most likely countries to start a nuclear war. We got a little bit closer to such a severe conflict when Pakistan voiced some dissatisfaction with some Indian government's steps to normalize the conditions on the disputed territory.

First, some basic geography. The grey area is India – which is mostly a Hindu (and Buddhist) country. It used to be a British colony along with Western and Eastern pieces that were Islamic and became separate once the colonial rule ended in 1947. The Western neighbor – formerly a part of the colony – is Pakistan while the Eastern, much poorer, Islamic nation is Bangladesh. They could very well be one, disconnected country but it would be impractical. As you see on the map, India is almost disconnected and surrounds Bangladesh in the East.

Needless to say, Bangladesh is so poor that it wouldn't dare to upset India too much even if it wanted.

Pakistan is different – like India, it's a nuclear power. From the beginning, the Northernmost region of the Indian colony – Kashmir – was the most disputed area. The whole historical Kashmir is depicted by red and purple colors. The red part is the Indian Kashmir province – called Jammu and Kashmir – and it is the source of tensions today.

OK, here you have another map of the region: 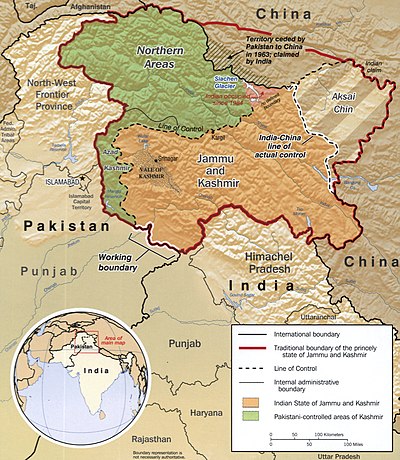 The green part of the historical Kashmir is controlled by Pakistan and it is primarily composed of the area officially called Gilgit-Baltistan although TRF and much of the world (including the Wikipedia map above) still uses the old term, Northern Areas. There's also a green thin strip on the South from the Northern Areas, that's the Pakistani Azad Kashmir.

The Eastern part of the historical Kashmir is controlled by China, it's the Aksai China, but China also controls a strip that is North of the Indian and Pakistani Kashmir, and North of Siachen glacier, the so-called Trans-Karakoram Tract.

Jammu and Kashmir, the autonomous Indian province in the middle, has 12.5 million people on 222,222 square kilometers or so. All of the Kashmir used to be Hindu or Buddhist – and played quite some role in the history of these two religions or non-religions. But things changed a bit. Jammu and Kashmir is further divided to three areas. Only the Kashmir Valley, about 16% of the territory's area, has a Muslim majority. The remainder has a majority of combined Hindu and Buddhist folks. That remainder is composed of 26% of the province by area, Jammu, which has a straight Hindu majority, and Ladakh, 58% of the territory of the province, where you need to combine the Hindus and Buddhists to get above 50%.

Although our newspapers routinely spread the Islamic, anti-Indian propaganda, the Indian Kashmir hasn't lost its autonomy today. It still has its Parliament and other regional organs. However, the region has had some far-reaching exceptions from the Indian constitution. In particular, Indian citizens weren't allowed to own any real estate over there. This exception is what was primarily lifted yesterday. The province still has its organs but no longer has a separate constitution, as was guaranteed by the now abolished article 370 of the Indian constitution. The province was economically neglected and the return of the normalized Indian capitalism should help the province to thrive. An investor summit is planned and so on.

The Indian Kashmir was originally Hindu and Buddhist, as I wrote, but because the Kashmir Valley is the most populated part (7 million people), as the only part that (like valleys in general) isn't filled with inhospitable mountains, Muslims already have a majority in the whole Indian province. The path towards the Muslim majority wasn't pretty, as you can imagine. The original population was killed, converted, or expelled. Just in the 1990s, 200,000 non-Muslims were expelled.

Škoda has learned who is in charge of Indian families

The analogous Pakistan-controlled part of the historical Kashmir has been integrated to Pakistan for many years. So what India is doing now is nothing else than a mirror image of the steps that Pakistan has done a long time ago. India has been proposing peaceful solutions, referendums, but it had the condition of regaining some assertively conquered areas. The other side wasn't willing to cooperate.

Right now, India has sent the army to the streets which are empty and the towns resemble ghost towns – have you seen the videos? Such a usage of the soldiers may look like a strongman's approach but these steps look justified to me due to the rich track record of Pakistan-sponsored terrorism in the region.

Thanks to Tonda Hejlík for most of this information.

It seems unfortunate to me that the Western world doesn't provide India at least with some moral help when it makes these natural and justified steps to cure the region and normalize the life in it. While we might view the Indian-Pakistani disagreements to be skirmishes between peoples that we have nothing to do with, they may also be interpreted as a part of the Islamic expansionism and the fight against it. So I find it rather obvious that the anti-Indian propaganda in the Western press is mostly powered by the same PC people who prefer Islam over the Western values when it comes to the West's territories, too.
Luboš Motl v 4:17 PM
Share