I gave a talk on quantum mechanics, its history, and its right and wrong interpretations to physics teachers from the Aussig [Ústecký] Region in Northern Bohemia, a part of Czechia that apparently has the greatest heart to encourage the teachers to learn stuff even outside schools – and in charming enough villages (if I avoid the term "random šithole") like Hoštka.

Aside from an hour-long talk, we also chatted about the right way to teach or not to teach quantum mechanics (and to visualize or not to visualize the orbitals and atoms etc.) and many other things, not to mention a more informal part of the events. The teachers had quite some real-world experience with the kids – some elementary school pupils but mostly high school kids – and they generally knew their subject very well and were enthusiastic enough to find ways to ignite the excitement i the pupil's minds.

All my previous talks and lectures that have ever touched the foundations of quantum mechanics were piles of standard, eclectic, politically correct stuff in comparison with how I phrased it here. Needless to say, all the statement about the observer-dependence of facts and similar things provoke some expected opposition.

Some of the teachers told me that they loved to include some cute problems involving supermen, explanations of some nuclear and subnuclear facts in terms of up- and down-quarks, and many other things. And they were convinced that lots of the kids get really attracted to the field.

On the other hand, some of the teachers, especially female ones, said something that I also believe to be rather common – and I think it doesn't really contradict the excitement from the previous paragraph. When I said that there should be classes with the extended exposure to mathematics and physical sciences (which I attended between the 5th and 8th grade and it was just a wonderful setup), they told me that they couldn't even convince 20 kids from the Aussig Region to commute a little bit further – because mathematics and especially physics is widely considered a useless dead zombie subject by this generation.

(Why there's no contradiction? Well, whether kids appreciate or love physics depends on the place – and especially on the attitude of the physics teacher, too. If the kids just start by accepting that physics sucks and the teacher finds it OK for them to believe so and adapts to the kids, they will keep on thinking that physics sucks. Sadly, most teachers probably approach it in this way. So the result is really their fault to a large extent.)

It's probably not universal but I do think it is a real sentiment held by a majority of this young generation – and not only in Czechia. The report that even this Aussig Region which has 820,000 inhabitants – and the officials who are more supportive of the STEM education of the teachers than officials at most other places – could be incapable of producing a single classroom of sufficiently talented and motivated kids who want to know mathematics and/or physics more than others is scary but it might be true.

The event took place in North Central Bohemia, in nearly flat "mountain range" known as the Central Bohemian Uplands. It's in the middle between the Sudetes which are pretty nontrivial mountains and the Central Bohemian lowlands around the Elbe and Moldau rivers. So the uplands are a bit more exciting than the Netherlands or even the bulk of Polands but it's still a rather flat country. The Sudetenland – i.e. since 1938, the Third Reich – had a border with the remained of Czecho-Slovakia somewhere in this area as well – given the nearly flat geometry, you would really want to be one of the generals who got the task to occupy the remainder of the Czech lands in March 1939 because it simply had to be a pleasant, straightforward, trivial task. ;-)

However, inside this flat plane, you may find unnaturally steep hills. The most out-of-place such a hill (but far from the highest peak) is Říp [Rzeep], the hill from the oldest one among the Old Czech Legends. Some 1400 years ago, Forefather Czech – who was, according to the Chronicle of Dalimil, a man fleeing the punishment for a murder in the old, more pan-Slavic homeland – came to the summit with his cohort and made the statement that the location looked optimal here: Here is the promised land that is abundant in milk and honey (and some other agricultural commodities he poetically described). Let's stop here, pals, and establish a new nation. ;-)

Lots of Czech families are going to this hill – which really looks like an unnatural pile of coal or a steep hemisphere placed in this relative flatland – and they show that they're in an equally good shape as Forefather Czech, a pensioner who also got there those 1400 years ago. At the top, there is a Romanesque rotunda – first mentioned in 1126 which doesn't seem too old – the Old Pilsenec Rotunda was already mentioned in documents from 976 AD – and Boum's Cottage. I forgot what was written on it so for a while, I was scared: 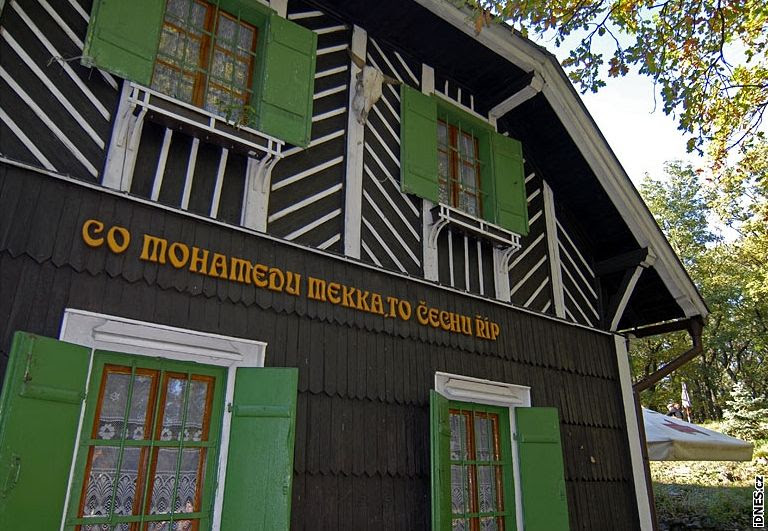 "Does a modest restaurant with overpriced beer and sausages etc. on the Czechs' holy hill already say something about Mohammed and Mecca?" I thought for a split second before I read the sentence carefully. The sentence says "what Mecca is for Mohammed, Říp is for Czechs", so thank God, it's not something that the European Union has imposed upon us – at least so far, the EU isn't operating on this hill.
Luboš Motl v 7:03 PM
Share