We are living next to a mad neighbor

By Dr Ivo Cerman, a Czech historian (orig. in CZ)

In the time of the climate crisis, Germany has lost its sound judgement. My latest visits to Germany and my reading of the German media between June and now (August 5th) have led me to the only single possible conclusion: that country has gone utterly crazy.

The theme number one in the media is no longer the migration crisis but the climate crisis. The newest buzzword is no longer "Willkommenskultur" (welcoming culture) but the term "klimaneutral" (climate neutral). Towns and whole lands are embracing Stakhanovite commitments about insanely short deadlines in which they will become "klimaneutral". In early July 2019, Munich adopted a pledge to become the world's first city with over 1 million of people that will be "klimaneutral". At the end of July, the Bavarian prime minister Markus Söder (CSU) already vowed to make all of Bavaria "klimaneutral" and he simultaneously proposed to incorporate the "Klimaschutz" (climate change mitigation) to the Bavarian constitution as well as the German federal "Grundgesetz" (fundamental laws).

These events are taking place on the background of mandatory Friday demonstrations featuring the high school youth, rallies that are expected to influence the climate through an unknown mechanism. At the end of July, Stakhanovites in Dortmund already pledged to meet on the streets on Wednesdays as well. It is impossible for the climate crisis to keep on resisting these frantic efforts.

I will stop eating meat

However, the most comical ones are the personal commitments by various individual Germans that are being reported by the public TV stations. On TV Phoenix, I watched an incredibly absurd music show for pensioners where the moderator encouraged members of the audience to reveal what they will do for the climate. What were their answers? I will stop driving my car, I will stop flying, I will live modestly, and especially: I will stop eating meat. No doubt about it, if everyone will he living a life of a hermit and avoid work, these commitments may be fulfilled. For some time. But how will it help the climate when some German people will stop eating meat? It wasn't immediately clear to me at the moment... I will return to the question later.

"Insane" was the right word for the vision of the female moderator who had a unified recipe for everything: to ban. It is a truly terrifying plan of the German Green Supremacists who don't know any milder approach than a ban. They will ban the domestic flights, the cattle farming, internal combustion engines... Because these folks are extremists, they need an enemy and they need him to ignite and escalate hatred against him and right now, it seems to me that they are working on the creation of hatred towards the flight passengers, especially those on the domestic flights. 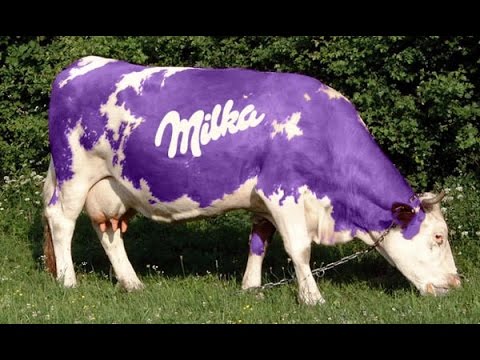 LM: as a schoolkid, I was taught that Milka was a symbol of West Germany – a reason why capitalism differs from socialism by their having mostly "meat production" while the camp of peace preferred "crops". Will she survive the German drive away from capitalism?

Given the propaganda role of the high school youth that is being simultaneously brainwashed, it is self-evident that the ban on the usage of the electronic devices needed to connect to the social networks, to send text messages, and cellphoning in general cannot be found in the list of banned activities. It is also comical that the hateful campaign is only being focused on the mass transportation and not on the private flights – even though it's clear that a modest passenger in a crowded airplane is saving nature much more than a passenger who enjoys the generous room of his own aircraft.

Generally it is also clear that according to the Green Supremacists' fantasies, the only source of energy should be electricity. Everything else should be forbidden. At the same moment, solar and wind power plants are the only types of power plants that would be allowed. Those clearly cannot satisfy the growing demand for energy that Germany is matching by the supply of its seven nuclear power plants – approaching their termination – as well as imports of nuclear energy from France and the Czech Republic. Nevertheless, nuclear power plants which are the only realistic replacement for the thermal fossil fuel plants are somewhat taboo in Germany. No one dares to say a single positive word about them in public. Immediately after the 2011 Fukushima accident, a demagogic campaign trying to ban the nuclear power plants as soon as possible was started and strengthened. What if the Greens succeed in banning nuclear energy in the whole European Union?

Extensive bans that are being planned by the demagogic left would have catastrophic financial and economic ramifications. Energy would get expensive which would lead to increasing prices of other goods and services. Many things would disappear from our lives altogether. Needless to say, it would impact the poor people and those who would get poor in the wake of these innovations. Even though the German public media reported that the "income gap between the rich and poor Germans keeps on widening", they haven't had the idea to supplement their planned environmental "recipes for improvements" with the information about their economic consequences.

On the other hand, the public TV loves to add such extra comments to their reports about Donald Trump's plan to tax the imports from Mexico. In early June, this news was enriched by a terrifying story about the alleged financial implications of these plans on the ordinary people. Right afterwards, they informed about a much larger plan for new taxes from all goods that depend on carbon (a "carbon tax") which the green activists want to introduce all over the world. But here the TV already remained silent about the financial consequences. Instead, viewers had the pleasure to watch an optimistic report from Sweden where the carbon tax is already in place, fishers are just fine with it, and on top of that, optimistic music is played in the background and the people are smiling. Who would dare to refuse such a wonderful new tax?

Even this decadent esoteric religion has its apostles and they are the famous Swedish fraudster Greta Thunberg, "the scientific journalist" Harald Lesch, and the Green Party politicians. All of them have turned their fearmongering to quite some business.

We must first realize that the goal of this movement has never been to help to solve a real problem. Just like in the case of the "migration crisis", the goal is once again to create the illusion that we are in such an extreme state of emergency that we must abandon the standard democratic methods of decision making, give up the critical thinking, and surrender our decisions about fundamental things to the hands of the moral experts. In the case of the migration crisis, I watched the program Wiener Vorlesungen where a "migration expert" was telling the viewers "diese Frage dürfen wir uns jetzt nicht stellen" and "diese auch nicht". But who will be deciding which question may be posed and which can't, wasn't explained. And this is a wonderful illustration of these people's approach.

Does the unnaturally infantile 16-year-old Greta Thunberg look like somebody whom you would like to assign the task to solve a truly crisis situation? Her slogan is "Ich will, dass Ihr in Panik geratet" – "I want you to panic". (Quote from her Davos January 25th 2019 speech.) That is also the title of the book with her speeches which is currently being sold in the German bookstores as a bestseller – well, it's more precisely shoved down the German readers' throats. The cover contains a photograph of Greta with ponytails and a big label saying "I want you to panic". Let's interpret the situation literally.

First, in the state of panic, you are incapable of rational thinking and that is the state that they want to achieve. Second, if you had an accident at home, would you call a plumber who only hysterically screams and spreads panic? If you were facing a genuinely serious crisis affecting the whole society, would you entrust the solutions to extremist politicians that make profit out of the crisis? To people who only have the power and control over the society if and when the problem lasts but who lose it when the problem is solved? I guess you wouldn't.

The alarmists include Harald Lesch who is almost unknown in Czechia. It's a man who was originally a physicist but now he can deduce the climate policies even from the General Declaration of Human Rights. So he has promoted the "climate crisis" to the highest science, the top imperative which may easily produce orders and bans for anything as simple corollaries.

It's about the cow farts

But I was still confused why we should stop eating meat because of the climate. I discussed this question with several Germans who were mostly just guessing. Is it because of the transportation and other machinery in the background? Or because of the people's health? Finally, a person who lives in Germany gave me another explanation. It's about the cow farts.

If you heard it for the first time, you may have been offended but it turned out that he was right. Cow farts are the real official explanation. According to the Germans, they have caused the climate crisis and the number of "seriously looking" research papers about the claim that have suddenly emerged is so high that you wouldn't believe it. I have spent some time by studying this new field of science but it is so absurd and so crazy that I would like to dedicate a whole blog post to this topic in the future. At any rate, the game is over for the German cows.


P.S.: Junge SVP – a Swiss youth organization linked to their People's Party – has written a petition, "Smiles for Future are dangerous", against "Smiles for Future", a decadent religious event in Switzerland revolving around Greta Thunberg. The Greta movement is labeled socialist and ecopopulist and the media are urged to inform about the inhuman character of the movement.

Yesterday, the Prophet Herself walked out and a sectarian war is looming over the demands that "Fridays for Future" should have. Will you bet the climate Shiites will beat the climate Sunnites? I hope that in this case, the Sakharov conditions aren't met.
Luboš Motl v 5:18 PM
Share