Some 3 miles from my home, I saw an advertisement for The Cornies, a labyrinth in the corn. It's really there (near Kyšice) and if you click at the hyperlink, you will see that there are 12 copies of this fun for kids in Czechia. Some extra research indicates that in 2017, this network already existed and included 25 locations. 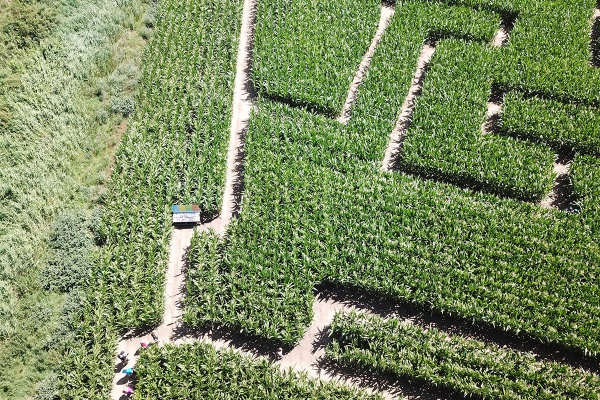 This is what our local labyrinth apparently looks like from bird's perspective. Try this Google Images search for related pictures.

For a while, I thought that it was an example of a simply clever Czech creativity. But I decided to verify the guess. "Popcorn labyrinth" looked like a suboptimal name. I quickly realized that I was always impressed or annoyed by the fact that the short English words for a labyrinth and for popcorn were the same. So I searched for Maize Maze and indeed, there is an English website with that very name.

(Note that the Czech word for corn, "kukuřice", is unusually long and awkward for foreigners.)

It seems that the Englishmen were particularly excited about the labyrinths in popcorn – and some Czechs tried to copy this genre of entertainment. Kids and adults may get in roughly for $3 and $4, respectively. You are not allowed to modify the corn and if you eat some, the organizers unfortunately have to shoot you dead.

The maze is pretty complicated, you get special cards, and you may also download a simple phone app which collects eight QR codes distributed over the maze. The goal is to pick them as quickly as possible, I guess.

It's easy to get lost in a damn corn field for an hour or two. Some people ultimately get out, they perhaps collect the 8 QR codes, and maybe even fulfill some additional tasks described at the places.

It's supposed to be a relaxing game and it's moderately entertaining for kids but I think it's unfortunate that this genre of a temporary labyrinth isn't really used to grow new mathematicians-analysts. When we were coding programs as kids, mazes were an important theme. So Robot Karel, an educational programming language, was also used for us to learn some logic of programming – although the Robot Karel programs surely use way more recursion than what is meaningful in an "adult" language. And the program for Karel to get out of a maze was a masterful exercise, of course.

Some other kids were constructing hardware, including real robots, and some of us were writing programs for these robots to get out of a maze. These programs were predecessors of the software that is probably included in the robotic vacuum cleaners these days.

One particularly simple but non-trivial algorithm to get out of a maze is to maximally go to the left at all times. You just imagine that your left hand touches the wall which stands on the left side from you – or you actually do it – and you just keep on moving. In that case, you will either be stuck in an infinite loop – you will walk around a closed contour – or you will be guaranteed to get out of the maze.

I suppose that if you start to apply this algorithm as soon as you enter the maze, you just can't possibly be stuck in a closed loop because your trajectory started as an open one by assumption. So it must be a way to get through the maze to the exit, right? Are some kids taught these things? They should be. But I am afraid that much like the higher mathematics and physics, many of these simple yet nontrivial algorithmic ideas are gradually being forgotten. Or they are at least becoming a material for engineering PhDs – although they use to be things taught at least to dozens or hundreds of kids in each city comparable to Pilsen just some 35 years ago.

What we used to do as kids was fun – even Robot Karel was fun to some extent (the programming language is originally from Stanford, not Czechia, but it's named after the Czech novelist Karel Čapek who introduced the word "robot" in his R.U.R.) – but there was something about the approach to coding that was very different from the present. Like in other situations, the focus was on the content and clever ideas (the actual algorithms), not on the form. These days, kids are taught almost just the form and nothing else.

In fact, I've won several programming contests as a kid – where we could write the programs in a Czech edition of BASIC or PASCAL or whatever. The irrelevance of the programming language and formatting details was clear from the very rules of these contests – they were contests involving algorithms, not some bureaucratic aspects of programming languages. The drift towards formalities and appearances has been obvious in many fields of the human activity – including programming.

Consequently, people became much more superficial, incapable of critical thinking, and vulnerable to manipulation than they were a few decades ago. Everyone is trained as a "communicator" of a sort – and almost no one actually produces or curates the content that is worth communicating. Not surprisingly, much of the society ends up spending the time by communicating garbage.
Luboš Motl v 4:11 PM
Share