This award is unlikely to erase our sorrow about the two weekend accidents in the mountains (see two previous blog posts) but... As The Symmetry Magazine and many others tell us, three men are going to share a special $3 million Breakthrough Prize in Fundamental Physics for the development of supergravity (or SUGRA for short). 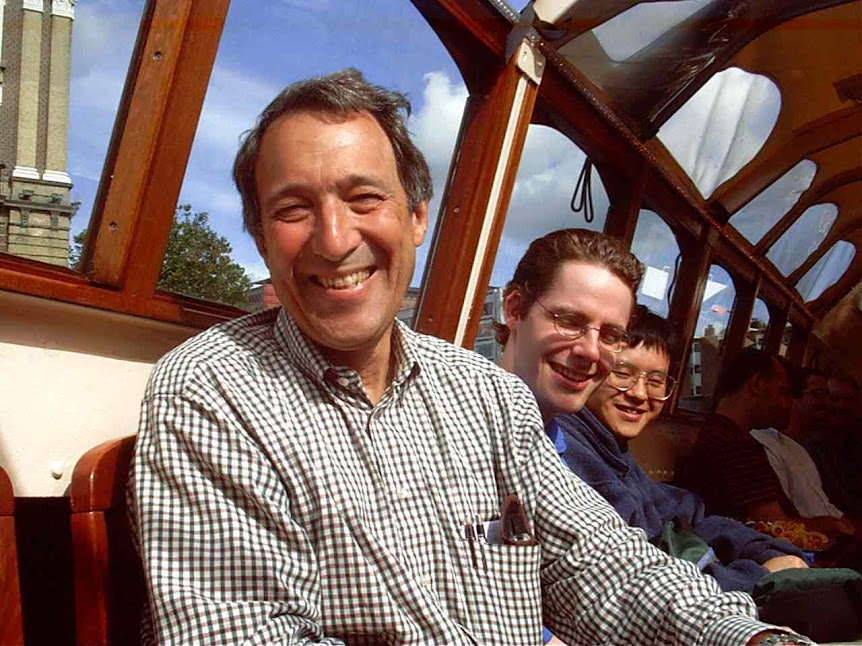 I almost forgot that we have also been to Amsterdam in July 2002. Dan, Martijn, Hong

The three men who deserve the award for their advances especially in 1976 are Sergio Ferrara, Daniel Z. Freedman, and Peter van Nieuwenhuizen. Needless to say, while I could post pictures of all of them (Ferrara at Harvard and van Nieuwenhuizen in Stony Brook), I have been much closer to Dan Freedman (MIT), as a co-author of our pp-wave Paper of Seven that is still anxiously waiting for its 250th citation, and as a partner on bicycles who actually has strong leg muscles to be able to disappear from my horizon whenever he wants.

Congratulations, Dan! And others.

It's very natural for supergravity to be finally rewarded – and I admit that I have sometimes missed that this was the natural bunch of people who were still waiting for this prize.

Supersymmetry emerged as a clever loophole – a symmetry that is neither acting on the spacetime in the usual ways (like the Poincaré symmetry), nor it is an internal symmetry that preserves spacetime points and acts "inside each point" separately. Supersymmetry is something in between them – which is only mathematically allowed because its generators are fermionic operators. Their anticommutator includes the momentum, the generator of spacetime translations:\[

\] Well, we usually need to distinguish dotted and undotted (chiral) spinor indices, add some gamma matrix for complex conjugation, and the dots may include "central charges". Supersymmetry was independently found both in the West and in the East – as separated by the Iron Curtain. In Russia, it was really found from algebraic considerations above. In the West, Pierre Ramond was incorporating fermions on the world sheet of string theory and found the world sheet supersymmetry – by seeing that it's an algebra obeyed by a particular 2D theory with bosons and fermions. We are in the early 1970s now.

Around 1974, Wess and Zumino would construct the first interacting four-dimensional supersymmetric theory – a scalar superfield with a cubic superpotential. This kind of work was going to expand around 1980 when physicists constructed the Minimal Supersymmetric Standard Model. SUSY GUT (grand unified theory) was added later. All these theories were non-gravitational.

In 1976, the new winners of the award constructed the first usable supergravity formalism for \(D=4\) and higher. It was simply a classical field theory which had the metric tensor – but to make SUSY easier, the metric tensor is replaced by the vielbein \(e^\mu_a\) – and the spin-3/2, Rarita-Schwinger field \(\psi_{\mu,\alpha}\) that carries both a vector and a spinor index (the spin is \(1+1/2=3/2 = 2-1/2\)). That fermionic field is the superpartner of the metric. They were able to define the supersymmetric variations of these fields so that the equations of motion were covariant under these transformations. The variations and equations have many terms so the underlying beauty of the local supersymmetry may look quite messy, disproving the idea that everything that is beautiful must look like a super-short formula on the T-shirt.

Only in 1995, Witten figured out that the most beautiful supergravity theory in 11 dimensions was actually linked to string theory. Being UV-completed as M-theory, it was the strong coupling limit of type IIA or \(E_8\times E_8\) heterotic (a duality discovered by Hořava+Witten) string theory. So only in the 1990s, the supergravity and string theory "communities" have really merged. The tight and important relationships between the theories in both "communities" became clear. Pretty much every string theorist understood that SUGRA folks weren't completely wrong to study non-renormalizable theories because many of SUGRA theories emerge as the long-distance limit of string theories; and SUGRA folks have generally also appreciated that string theorists hadn't been a useless thing because SUGRA is inconsistent by itself and needs a stringy completion at Planckian energies to restore the consistency.

Just to be sure, this merger wasn't an example of a perfect melting pot. It resembled the reunification of Germany instead. People couldn't throw away the culture that had shaped them for decades. So e.g. Sergio Ferrara, Daniel Z. Freedman, and Peter van Nieuwenhuizen remained top "supergravity theorists" who wouldn't have too strong reasons (and powers) to be reshaped into string theorists.

SUGRA may be considered one of the main culminations – or the main culmination – of the research of (superficially) local quantum field theories with a "locally looking action" that are as beautiful as possible. The local diffeomorphism symmetry (Einstein's localization of the symmetry generated by the momentum \(P_\mu\)) is extended to include the local supersymmetry, too. Because the spinorial (fermionic) components grow exponentially and the bosonic degrees of freedom grow polynomially, special dimensions are needed for SUSY to work – and 11 spacetime dimensions is the maximum dimension in which the super-Poincaré symmetry may be defined. At the same moment, SUGRA needs to be quantized, for the fermions to have "beef" (classically, fermionic fields can only take the value zero) but the quantization makes it inconsistent at the loop level, so SUGRA is already a "transient" theory that makes the transition to "stringy" theories with extended objects unavoidable.

Note that the formalism of SUGRA may become really a repulsive pile of technicalities with many terms. For example, the BRST symmetry generated by \(Q\) – with its cohomologies that many people already find too abstract – isn't "complex enough" to deal with SUGRA. Instead, because of the constraints that don't form a normal Lie algebra, to do the quantization properly, supergravity theories normally need a generalization of the BRST approach, the BV (Batalin-Vilkovisky) formalism.

Needless to say, we hear questions whether SUGRA is relevant for Nature around us. Ferrara says that the Higgs needed 60 years to be discovered – well, it was really less than 50, but OK – and we will need a similar period of time to observe SUGRA. He hasn't indicated what is his scenario for observing SUGRA. I find such an observation rather unlikely – at most, we will see isolated particles that will be consistent with a "gravitino" etc. – but I am confident that SUGRA has to be an approximate description of a part of Nature, anyway. Among my "SUSY exists because", the blog post "SUSY exists because the number 3/2 cannot be missing" is the most relevant one. At any rate, string/M-theory is unavoidable and only its supersymmetric versions are promising, and those have gravitinos and local supersymmetry.

We haven't seen any "direct empirical evidence" for SUGRA but the same comment applies to the Hawking radiation and other things. Their status – how much we know they are relevant in Nature – is comparable. Especially because we see that some of the confirmations may take a very long time, we must simply be capable of evaluating theories well before the confirmations arrive – otherwise science would change to empty promises of experimental discoveries. Instead, theoretical physics is a well-defined discipline with its theoretical – but indirectly empirically rooted – rules.

The three men started a transformation that has changed the default expectation about the relevance of local SUSY. I think that the contemporary competent physicists simply do believe that SUGRA is more likely to be relevant in Nature than not, and you would need another "opposite" discovery to change this default expectation. The change of the expectation is an important contribution to science. Science doesn't proceed just by breakthroughs that make everything certain (nothing is ever quite certain). Everyone who says otherwise is deeply misguided.

A five-minute-long guide how to find gravitino balls – especially on high-security planets – and prove supergravity.

P.S.: Nature printed a story by an aggressive inkspiller named Zeeya Merali who had to call supergravity "speculative" in the title and place "supergravity" in quotation marks. Dear speculative "Zeeya", there is absolutely no justification for inserting supergravity – well-established concept in physics – in quotation marks and it's just plain idiotic to call the theory "speculative". (The quotes around "Zeeya" are fine because unlike supergravity, "Zeeya" isn't a valid English word.) It's just a damn theory – every theory in science is "speculative" to one extent or another. Also, to show that the number of redundant dumb attacks hasn't been enough to satisfy her, the subtitle repeats that SUGRA "might not be a good description of reality". Or, more importantly, it can be one. Even if it were just a matter of reasonable probability that SUGRA is relevant in Nature, they would deserve an award. Even if it were just an amazing piece of mathematics, they would deserve a similar award.
Luboš Motl v 4:42 PM
Share