Removal of dude walls and Bolsheviks' terror of the 1950s

Jaime has brought us another remarkable story at NPR: Rachel Maddow, a far left talking head, visited a university, saw portraits of some distinguished men, called it a "dude wall", and because there is a whole movement – whose leaders remain at large – which openly fights against all "dudes", the situation escalated and they have removed all the paintings: 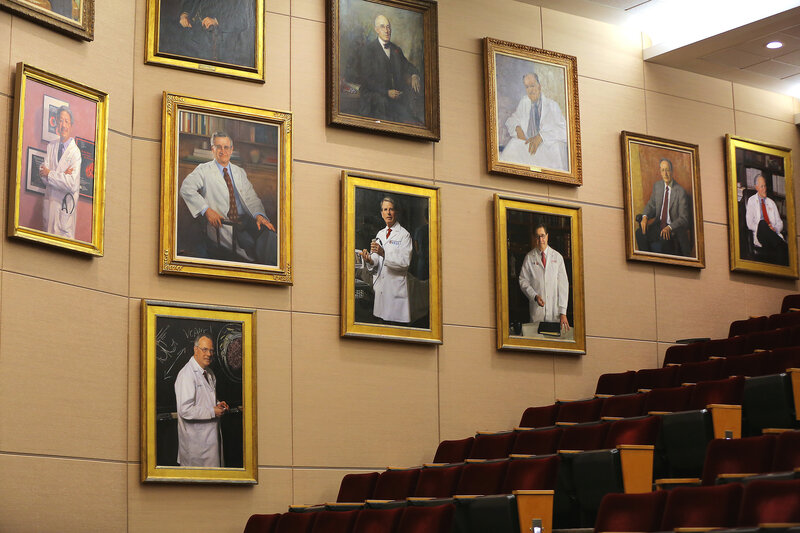 Some important chap from the university returned to the hall and was shocked by the empty walls. So would I. Does it remind me of something? You bet.

In half an hour, the ČT2 channel of the Czech public TV airs the touching 1993 movie Chateau in Bohemia (92 minutes). Sadly, I only have this original Czech version for you.

It was shot in the free early 1990s when Czechoslovaks were still poor enough and their self-confidence was very low as a result – but it was rather generally agreed that the nationalization and the universal liquidation of the nobility and other upper classes was just wrong and utterly immoral.

The similarity with the events at the U.S. and Western European universities and other places is hard to overlook. The movie starts with the 60th birthday party of Countess of Lansdorf and Scheinberg – at her chateau somewhere in Bohemia. Other upper class folks are pleasant, along with her servants, and she plays some Tchaikovsky (from Eugene Onegin, an opera) on the piano.

It just happens that at that time, some commies from the local government invade the chateau, order the countess to leave, and plan to seal the chateau. The countess – a role prepared specifically for Ms Jiřina Jirásková, an A-class character actress (and a one-time director of a key theater) who died in 2013 - elegantly stops her fancy activities and promises everybody to complete the composition during her 70th birthday party. Where will be all of us? We will meet at a cemetery, a fancy man suggests. The celebration will take place here, she promises.

(Given her German-sounding aristocratic name, it's plausible that her chateau was confiscated before the 1948 communist coup, maybe already in 1945, but I think it's not really important for the main point. Also, nobility was just "tolerated" – but not robbed – since the 1918 birth of the republic.)

OK, ten years later, the ex-countess and now a lowly paid worker in the textile industry returns to her chateau and finds her former maid as a guide explaining something to tourists-plebs. She listens and makes a few corrections about the maid's statements – otherwise the maid is saying it nicely. (The small maid's daughter previously wanted to kick the lady from a room because strangers don't belong there. The countess told the kid that she was the guide's godmother, a word that the kid obviously didn't know.)

The maid has been promoted – and she is trying to find some lame excuses why she took the job connected with the communists' robbery. No one else was good and available! All these people had this as the #1 excuse. Meanwhile, she has married a guy... He turns out to be a nobody plumber with a very flexible spine – a politically correct one – who was promoted from a plumber to the manager of the chateau. And of course, he would never allow the countess to operate on the chateau, not even for a while. Fortunately, he's going away for some time.

When I am watching it, the analogies with the outright evil people or spineless people in the Academia seem to be so obvious. I am evaluating e.g. which of the physicists – who would e.g. refuse to testify that 1+1=2 for me, purely because of their personal petty self-interest where all morality has been thrown to the toilet (I just can't understand how they can live with themselves) – are most similar to various people who superficially behaved in a friendly way towards the countess but who just refused to help her even in an infinitesimal way (some are candid about the reasons – both in the movie and in my reality).

Meanwhile, the plumber-turned-chateau-manager is a good analogy for assorted crackpots who have never done anything valuable in physics and who don't have the ability to do so but who have been picked as the "good enough replacements of the real physicists" by the fellow inkspillers-activists who have hijacked most of the press etc.

The countess' valet (actor: Mr Karel Heřmánek) used to be super-handsome and polished. Within a decade, under the influence of the new communist conditions, he turned into a disordered alcoholic who sleeps with horses etc. But he's the one whose instincts got resuscitated and who was actually helping her to realize the promised 70th birthday party. The commies sent her away by a train. She managed to stop it by an emergency lever, plus hitchhiked to get back to the chateau. Various events take place in the movie – invitations, the need to purchase the wine etc. – and the final scene shows the again-elegant valet who finds the dead corpse of the countess on her chateau.

It's a sad scene, he acts professionally, but at the same moment, it's really a happy end of a sort. It's a victory of her dignity over the Bolsheviks – and an arrangement showing that she basically fulfilled the promise given ten years earlier. Just to be clear, communism continued for 30 more years after the death of the countess.

The Western universities and most similar organizations are really undergoing a similar change – perhaps a cultural revolution – to the nationalization pogroms in Czechoslovakia in 1948 and soon afterwards. The most obvious nobodies and various people without any character are getting promoted for their being scum – while the actual achievers and owners are being kicked out of their chateaux or their paintings are being removed from the "dude walls" because a kitschy TV pervert broadcasting stupid conspiracy theories for far left jealous nobodies has used this slur to describe the portraits of achieved men. Why was someone like Ms Maddow even allowed to enter the university? This is what I consider the primary scandal here – everything else is just a nearly unavoidably escalation of that primary scandal.

Lots of people intrinsically know that it's just wrong for the filthy type of the people to get to the top and for the great people to be suppressed – but lots of people and maybe most people are just utterly immoral opportunists, just like in the environment surrounding the countess that was switching to the Stalinist Czechoslovakia. So the bad things are happening, anyway – and they are happening again – and it may take decades and things may have to get much worse before they may start to improve again.
Luboš Motl v 7:43 PM
Share