...and used it as a reason to immediately reject Everett's musings...

I have already written this finding in a comment but let me dedicate a special blog post to the revelation because famous physicists, and especially Richard Feynman, are often connected with far-reaching claims about the "Many Worlds Interpretation" of quantum mechanics.

If you click at the hyperlink above, you may remind yourself of some basic facts about this meme. Let's return some 62 years into the past.

As a student of John Wheeler's, Hugh Everett III wrote the thesis, The Theory of the Universal Wavefunction, in 1956. A year later, in 1957, Review of Modern Physics published the version Relative State Formulation of Quantum Mechanics.

These texts are mixtures of wrong statements and trivialities. The main wrong statements are that "the wave function is an objectively real, observer-independent, and therefore 'universal' set of classical degrees of freedom" and that "it doesn't ever collapse".

The trivialities include some comments about the entanglement between the observed objects and the apparatus that is created by the measurement according to another, external observer – and most of these trivialities were copied from John von Neumann's papers from the early 1930s, anyway.

Neither the 1956 nor the 1957 version of the thesis contains any reference to "many worlds" or "parallel worlds" or "splitting the worlds" etc. When were those coined and by whom? The end of the first paragraph of the Wikipedia article claims that Bryce DeWitt coined "many worlds" in the 1960s and the 1970s when he popularized Everett's musings.

But if the phrase were coined by him in the 1960s and 1970s, then he was demonstrably not the first person who did it. Instead, it seems it was Richard Feynman, right in 1957.

We need to return to a very specific event, a conference in North Carolina between January 18th and 23rd. If you've read Feynman's Surely You're Joking, Mr Feynman carefully, you remember a very short story, It Sounds Greek To Me. I will shorten it even more! ;-) Feynman came to the airport for a gravitational conference in 1957, asked for directions to the university, and he was told that there were two universities. Which one should he choose? Feynman said that "there had to be people with heads in the air, not reacting to the environment and mumbling things like gee-mu-nu gee-mu-nu". The dispatcher got excited: "So you mean the university at Chapel Hill!"

Because it was in 1957, they could already discuss Everett's ideas – note that both Feynman and Everett were Wheeler's students at some point. Did they mention those ideas at the conference? You bet. And can we find some traces of these discussions? Happily, we can. Well, if we throw away the excessive modesty, we must say "your humble correspondent can". :-) There is a book titled The Role of Gravitation in Physics (Amazon) that reviews this very conference and whose page 270 (282/298 in the PDF file) contains the relevant comments about Everett's thesis:


In the subsequent comments, Feynman disagreed with some more technical comments about propagators by Deser and they're no longer directly related to Everett's stuff.

You see that the content is very simple – while it clearly summarizes everything that the MWI fans agree about today. Feynman has simply made the observation that if the wave function is "universal" (a classical wave) and if it doesn't collapse, which is what Everett had claimed, then all the infinitely many possible worlds simultaneously exist. Indeed, that follows from the claims by Everett in a straightforward way. The wave function evolves to a superposition of "dead" and "alive" and if you ban the collapse, both terms still exist – and the terms look like copies of the right world.

(All sane physicists assume the collapse at least in the initial state, otherwise controllable initial states – for lab experiments etc. – could never be legitimately assumed in physics. MWI fans assume this initial collapse as well which is why they're hypocrites and contradict their own philosophy.)

Clearly, for Feynman, this was a reason to reject the idea because the infinitely many real worlds represent "serious conceptual difficulties" which is just a conference slang for "bullšit". Mutually contradictory properties of the world are simultaneously true which prevents us from making any statements at all. I believe that this Feynman's comment was the first time when "worlds" (in plural) was used (twice in the quote above) to describe the content of Everett's proposal. I am not the first person whom you know and who has indicated that Feynman deserved the credit for the "many worlds" meme. 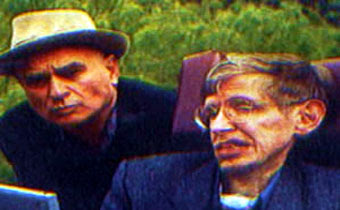 More pictures of physicists from that TV program...

Note that in 1995, as the Wikipedia article also mentions (but doesn't justify by the 1957 conference quote), Channel 4 broadcast a documentary "Reality on the Rocks: Beyond our Ken". In that documentary, host Ken Campbell asked whether all the Universes are equally real and... Stephen Hawking answered "Yes.... according to Feynman's idea, every possible history (of Ken) is equally real." So Hawking did share the view that Feynman should be credited for the discovery of this phrase and picture – that all the "many worlds" are equally "real".

In 1957, Feynman discovered everything that may be discovered about the MWI – the two-sentence slogan summarizing the fairy-tale – saw that there was nothing physically usable about the idea, and didn't touch that stuff again in his life. That's exactly how a real physicist deals with similar proposals. Feynman surely didn't know that in 2019, the New York Times would demand that all theoretical physicists pay tribute to the failed idea that he dealt with by two sentences in January 1957.

Unlike Feynman, Hawking found that idea persuasive but he refused "the interpretations" and used to say that "whenever he hears about Schrödinger's cat, he reaches for his gun". In practice, Hawking didn't work on it in any sense, either. He also assumed that the initial states may be controllable i.e. apparently following a collapse and he mostly promoted the MWI slogans because he wanted people to understand that superpositions are normal.
Luboš Motl v 2:44 PM
Share